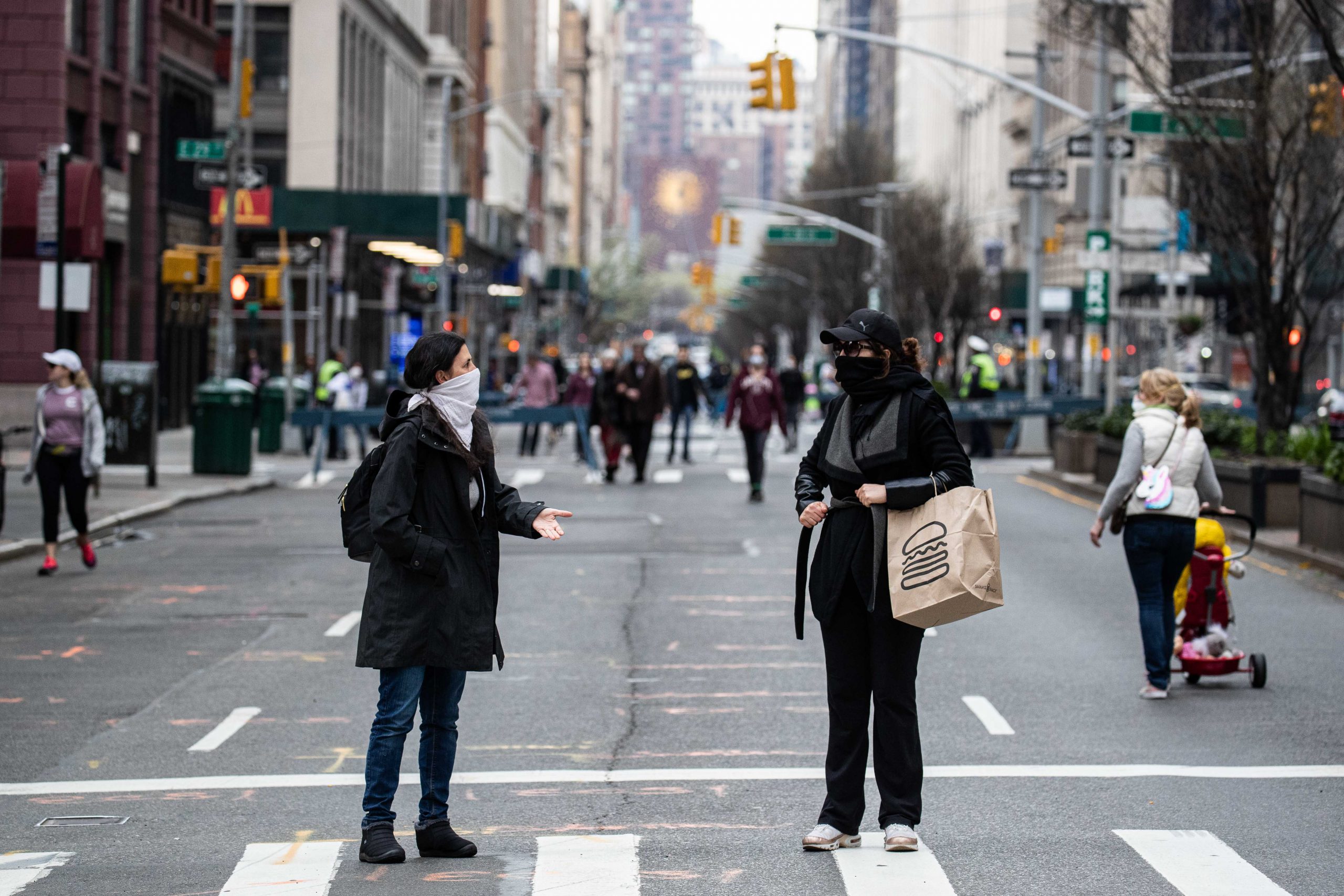 Two women talked at a safe social distance on the Park Ave. open street the day before the mayor canceled the program. (Photo by Isaac Rosenthal)

Johnson, Rivera push for 75 miles of car-free streets during shutdown

BY THE VILLAGE SUN | Mayor de Blasio earlier this month pulled the plug on a short-lived “open streets” program that created space in each borough for people to be outside safely in the fresh air.

The mayor said the car-free streets program required too much police manpower.

Manhattan’s designated open street was along Park Ave. spanning part of the 20s and 30s.

Now, though, City Council Speaker Corey Johnson and Councilmember Carlina Rivera are upping the ante by introducing legislation to create up to 75 miles of open streets citywide during the pandemic to allow cyclists and pedestrians more room for social distancing.

Their bill will be introduced Wed., April 22.

The legislation does not specify which streets would be opened; that would be decided afterward, assuming the bill wins approval.

And the mayor conceivably could veto the initiative, which the Council could then override with a two-thirds vote of its 51 members.

With Governor Cuomo having said New York State on Pause will continue through at least May 15 — and with the weather getting balmier by the day — the politicians say cooped-up New Yorkers desperately need car-free open streets. Many sidewalks are too narrow to allow for safe social distancing, and there just isn’t enough park space, they say.

“New Yorkers don’t have the street space they need to maintain proper social distancing, which we know is essential in this public health crisis,” Johnson said. “While we want to work collaboratively with the administration to open streets, this issue is so important and so urgent that we are taking legislative action to make it happen ourselves. Other cities across the country and around the world have demonstrated that this is doable. There is no reason we can’t do this here.”

“For years, New York City led the nation in developing innovative solutions to our biggest urban challenges,” Rivera said. “Now we’ve fallen behind so many other cities during the COVID-19 crisis, including when it comes to ensuring proper social distancing on our streets for New Yorkers, from the senior going to the grocery store, to the essential worker on their way to the hospital. And as the weather gets warmer and more New Yorkers seek brief respites from stuffy, cramped and often un-air-conditioned homes, we have to provide them with outdoor spaces where they can properly social distance, and our parks just can’t do the job alone. I’m proud to be leading this effort, and I look forward to working with the Mayor’s Office and the Department of Transportation collaboratively. But let’s be clear — the need for expansive open streets in New York City cannot wait any longer.”

“The increase in cyclists we saw in March must also be accompanied by an increase in street space available for all New Yorkers to use,” he said. “We must also continue working to expand the bike-sharing programs to nearby hospitals and medical centers for all healthcare workers and members of the community to use during this time.”

Councilmember Fernando Cabrera is also on board with the bill.

“Addressing the impact of dealing with COVID-19 also requires maintaining physical health and mental health,” he said. “New Yorkers have been mostly indoors for more than a month. While ‘stay at home’ measures are working to reduce the spread of the coronavirus, they also have unintended consequences for mental and physical health, for which exercise is an important component. Let’s open streets to pedestrians, while we continue to enforce social distancing and face covering.”

“Berlin, Paris, Montreal, Denver, Minneapolis, Vancouver, Winnipeg, Portland, Bogota and Oakland have all taken this commonsense action,” Councilmember Brad Lander said. “None of them needed four police officers per block to make this program work and ensure that people observe physical distancing. Neither do we.”

“Whose streets? Our streets!” declared Councilmember Carlos Menchaca. “The reduction in public transportation service has forced people to cram buses, trains and ferries. We need to make it safe and open for our neighbors to use alternative means of transportation. As a bicycle commuter and safe streets advocate, I applaud and sponsor this legislation.”

However, opponents of the city’s current major traffic experiment — the car-free 14th St. busway — were, not surprisingly, exasperated after hearing about this latest car-banning scheme.

In addition, Community Board 4 recently recommended making numerous streets in Chelsea car-free during the New York shelter-in-place shutdown, including 15th, 16th, 17th, 18th, 21st and 22nd Sts., from Sixth Ave. to the West Side Highway.

Village attorney Arthur Schwartz is still fighting the busway, and intends to appeal a prior ruling against his lawsuit on the 18-month-long pilot project.

“This is absurd!” he said. “There is not a lack of space on the sidewalks, and there is a continued need for delivery truck access, taxi access and sometimes car access.”