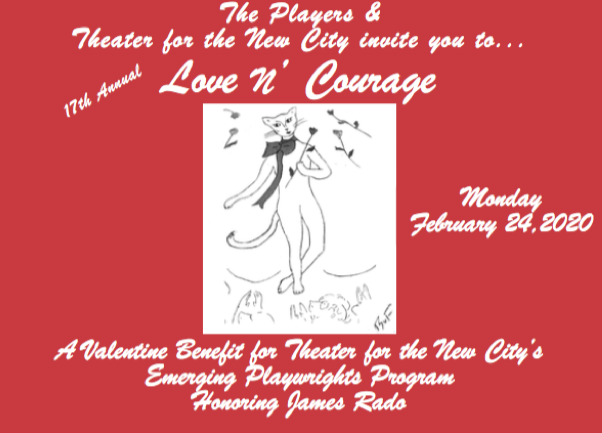 BY CLAUDE SOLNIK | When James Rado, Gerome Ragni and Galt MacDermot’s musical “Hair” debuted in 1967 and transferred to Broadway a year later, they made history.

The three showed they had talent and a lot of love and courage, as they created a show that helped redefine the meaning of a musical and captured the energy of an era.

Theater for the New City at its annual Love n’ Courage Benefit on Mon., Feb. 24, is honoring Rado for his work and contribution to culture, theater and Downtown.

The Tony and Grammy award-winning actor, playwright, director, writer and composer will perform and be celebrated at the gala, at The Players Club, at 16 Gramercy Park South. For information, call the theater at 212-254-1109 or go to www.theaterforthenewcity.net.

“He was really the father of the new theater,” said Crystal Field, executive director of Theater for the New City. “‘Hair’ broke ground. He’s performed at a number of festivals at the theater. His work is totally inclusive. His casts are diverse.”

Tickets for the gala, going for $200, offer the chance to hear Rado perform, accompanied by pianist David Lewis, in an evening emceed by Phoebe Legere and Matt Morillo.

The night also will include a performance of “Earth Cry,” music written by Frances Key — great-granddaughter of Francis Scott Key, author of the lyrics for “The Star Spangled Banner” — with a 30-member chorus and projections.

City Councilmember Carlina Rivera is slated to speak at the event, which is meant to be a celebration of culture, the city and the theater’s role in presenting new work. 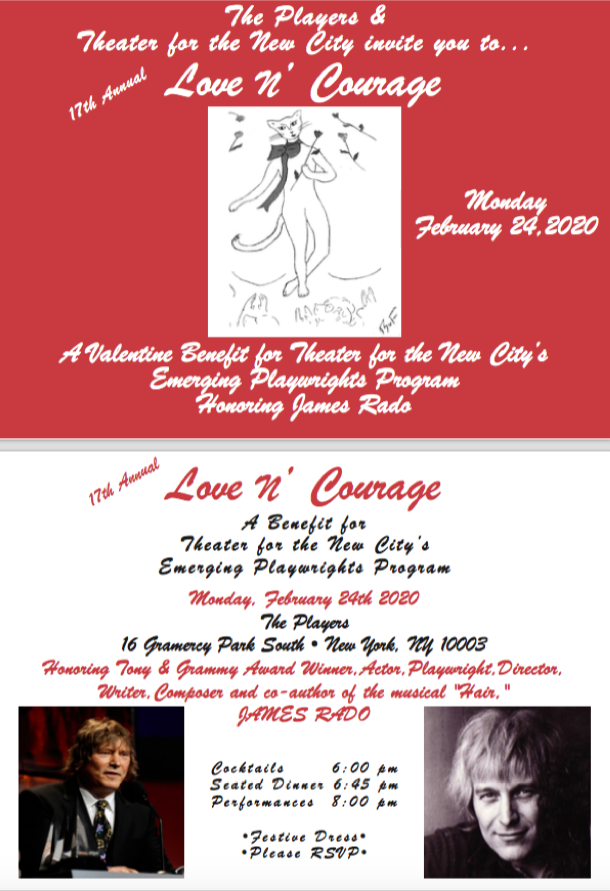 The event is held to benefit the theater’s emerging playwrights program, which gives playwrights a place to present new work.

“It gives emerging playwrights a chance for full productions of their work, with costumes, lights, sets, a stage manager, assistant directors and an audience without censorship. And that’s very important,” Field said. “An emerging writer can come here and begin to seriously have full productions. We do full-length plays.”

Field said presenting new work is a fundamental part of the theater’s mission, providing a way for authors to reach audiences at affordable prices.

“We’ve done thousands of plays,” Field said. “We’ve done more plays by playwrights of color than any theater in the country dedicated to one ethnicity.”

She remembers seeing the original production of “Hair,” at The Public Theater, also Downtown, although Rado would later perform at Theater for the New City, as well.

“I was thrilled,” Field said of her reaction when she saw “Hair” first performed with Rado playing the role of Claude. “The band was on the stage. It was fabulous.”

James Alexander Radomski, or James Rado, was born in Los Angeles, and raised in Rochester, N.Y., and Washington, D.C. After graduating from the University of Maryland and serving in the Navy for two years, he went on to study with Lee Strasberg in New York and write and record songs with his band, James Alexander and the Argyles.

Rado’s show “Marathon 33” debuted on Broadway in 1963 and he originated the Broadway role of Richard Lionheart in “The Lion in Winter,” by James Goldman, in 1966.

He and Gerome Ragni met in 1964 as actors in the Off-Broadway show “Hang Down Your Head and Die” and were cast in the Chicago production of “The Knack,” by Ann Jellicoe, even as they began writing “Hair.”

“There was so much excitement in the streets and the parks and the hippie areas, and we thought if we could transmit this excitement to the stage, it would be wonderful,” Rado said.

“Hair” debuted Off-Broadway in 1967, with Rado originating the role of Claude, and transferred to Broadway in 1968, running for 1,750 performances.

Rado and his brother Ted wrote a musical entitled “The Rainbow Rainbeam Radio Roadshow,” or “Rainbow,” before reuniting with Ragni to co-write “Sun: Audio Movie,” with music by Steve Margoshes.

Rado and Ragni teamed with Margoshes on “Jack Sound and His Dog Star Blowing His Final Trumpet on the Day of Doom,” which ran at La MaMa in 1978.

Rado has been involved in numerous productions of “Hair” since then, as well as working on many other projects.

“He did other shows and he performs Off-Off-Broadway,” Field said, noting that Rado has become not just a force within, but a friend of, Downtown theater. “He has performed at our theater a number of times.”