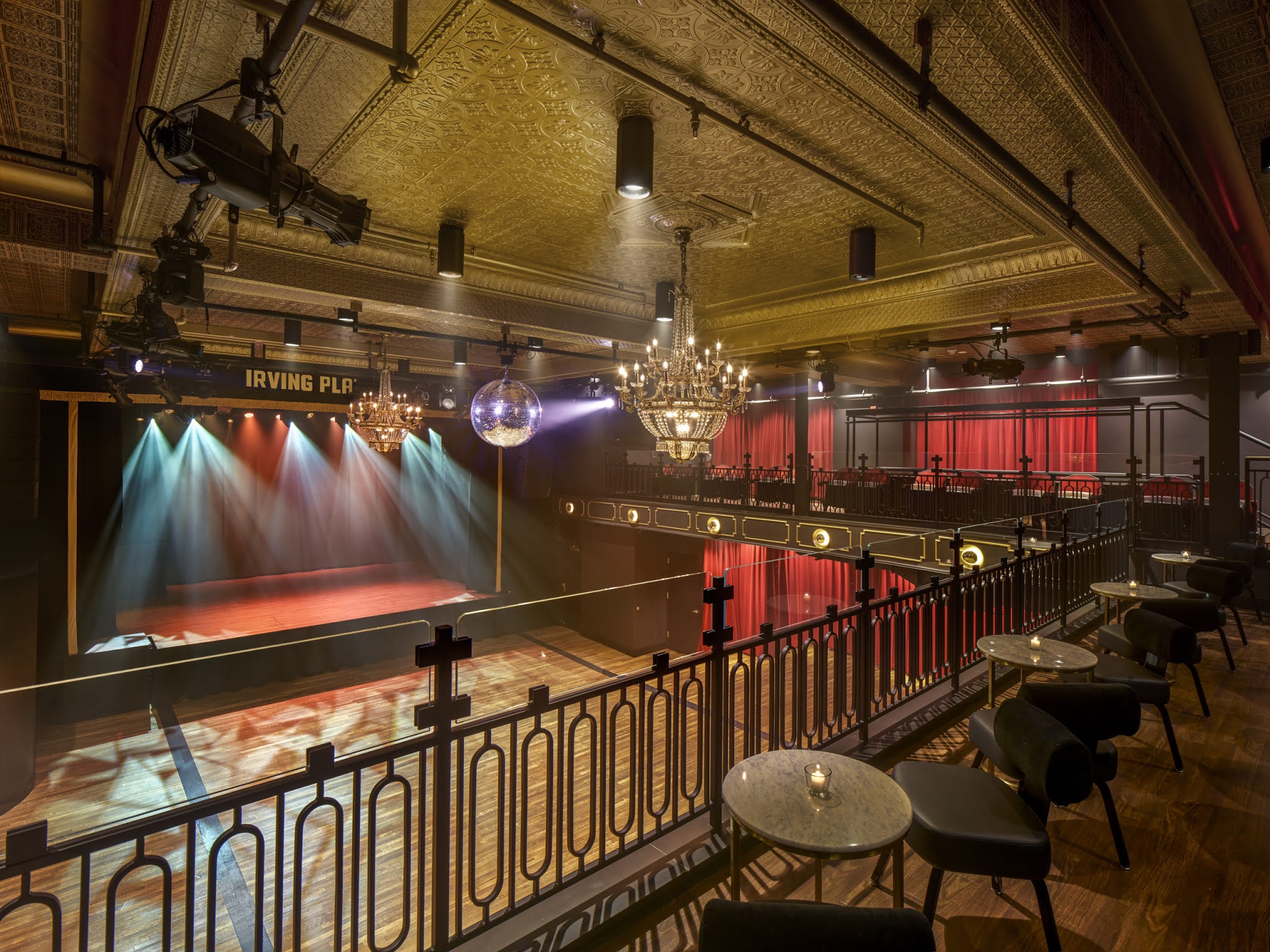 BY EVERYNIGHT CHARLEY CRESPO | Just a few hours before Governor Cuomo, on May 17, introduced his new strategy for reviving the live entertainment industry in New York, Live Nation announced the long-delayed reopening of the refurbished Irving Plaza concert hall. The promoter announced more than 40 concerts from this August to next May, with many more to come.

Irving Plaza closed in 2019 for multimillion-dollar renovations. Its projected reopening last year was postponed due to the coronavirus pandemic. The venue will host its first concert of this decade on Aug. 17.

The 19th-century building, at E. 15th St. and Irving Place, that houses Irving Plaza was originally four separate brownstones. The combined complex became a hotel in the 1870s. In 1927, the owners gutted the building, converted the hotel into a ballroom-style theater, and christened it Irving Plaza. Over the next few decades, Irving Plaza would serve as a union meeting house, a performance space for folk dance troupes, a Polish army veterans community center, and a venue for the People’s Songs Hootenannies with Pete Seeger and Woody Guthrie.

Since becoming a rock concert hall in 1978, the 1,200-person-capacity venue has staged concerts by Paul McCartney, U2, the Foo Fighters, Green Day, Ariana Grande, Katy Perry, Eminem, Childish Gambino, Nine Inch Nails, the Ramones and thousands of other popular music icons. The venue closed and reopened several times over the years, with Live Nation reviving it in the early 1990s. The most recent closure in July 2019 after two Anberlin concerts was for a projected eight-month renovation.

Starting with an Ashley McBryde concert on Aug. 17, ticketholders will enter an expanded lobby and bar area, which will provide a new space for multifunctional use, including artist merchandise, meet-and-greets or individually curated events, according to a press release. Throughout the premises, customers will be able to access next-generation Cisco Wi-Fi 6 for fast and reliable social connectivity.  Upstairs in the ballroom, where the concerts are held, the renovations include improved sightlines, state-of-the-art sound and lights, a new VIP lounge with a private bar, and balcony-level boxes with unobstructed views of the stage. The performers also will enjoy improvements, with two refurbished balcony-level dressing rooms with direct stage access, plus an adjacent green room with a private bathroom and amenities.

Irving Plaza’s press release speaks of all the structural enhancements that emerged from a pre-COVID blueprint. The press release makes no mention of air-filtration systems or any other COVID-era compliance or safety protocols. Does the Live Nation team anticipate that these measures will be unnecessary by the Aug. 17 reopening date?

Cuomo on May 17 announced that large venues could seat vaccinated people at 100 percent capacity, but that they could also seat unvaccinated ticketholders 6 feet apart in a designated area. The governor, however, did not extend this concession to midsize venues like Irving Plaza. Presumably, the concerts announced for Irving Plaza were booked with the anticipation that by the show date, the state would permit midsize indoor venues to present events at 100 percent capacity. Currently, capacity limits for a midsize indoor venues remain at 33 percent with a maximum of 250 attendees. Additionally, Irving Plaza has typically been a stand-up venue, and the state government presently does not allow any standing. Chairs, in and of themselves, reduce the capacity of any stand-up venue.

Ticket sales for the following concerts will be staggered. The Irving Plaza announcement made no mention of COVID-free sections or required proof of vaccination.

10.17 The Toadies & the Reverend Horton Heat

Dates to be announced: