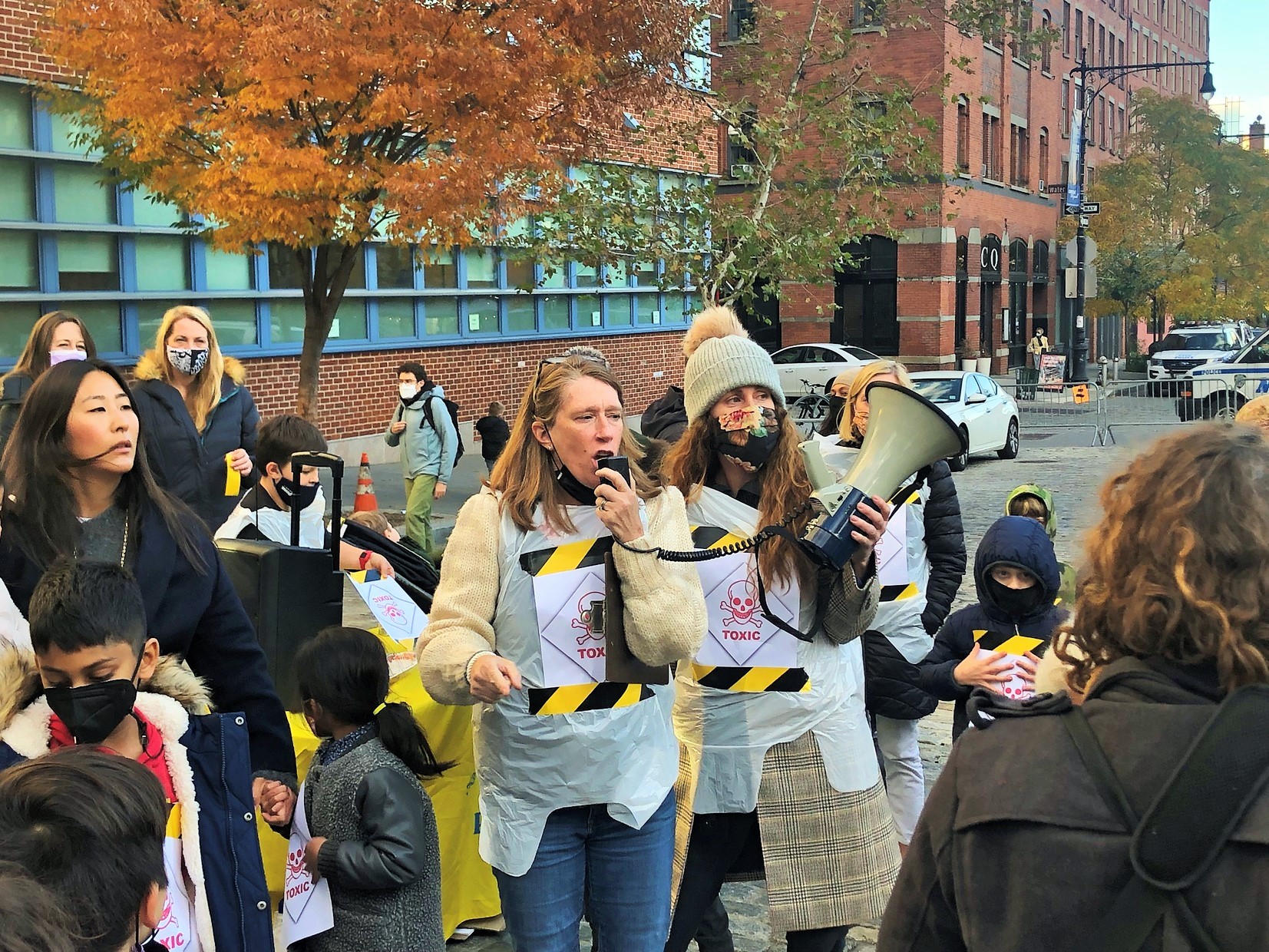 On Tuesday at 2:50 p.m. a group of concerned parents, children and local activists circled the site of the planned development, which is currently a parking lot.

No, in fact, there were not actually 250 people present, but nonetheless the number’s symbolic meaning was clearly expressed.

“How many people strong are we?” they chanted. “Two hundred fifty strong!”

Their greatest concern is that toxic waste from the site, which was determined to contain the “neurotoxin” elemental mercury, could put at risk the health of students at three schools directly neighboring it.

They also want to see development that’s in scale with the 11-block South Street Seaport Historic District — meaning no taller than 120 feet.

“This developer is rushing,” Emily Hellstrom, a parent and activist whose child attends one of the schools and whose parents live in the neighborhood, told The Village Sun, “They’re racing at the expense of our community. This development should not happen to begin with, but if for some reason it is going to happen, it shouldn’t happen in a rushed manner.

“These kids play here,” she added, pointing to cobblestoned Peck Street in front of the Peck Slip School. The play street would likely become inaccessible while tons of toxic mercury left over from a long-gone thermometer factory would be removed from the ground through the Brownfield Cleanup Program.

What opponents slam as a “toxic” development proposal is currently making its way through the city’s Uniform Land Use Review Procedure (ULURP).

During its opening role in ULURP, Community Board 1 voted no on the plan. But the City Planning Commission next voted to approve the project on Oct. 20, meaning the City Council has 50 days from then to decide on it. As of today, 27 of those days have elapsed.

In a blow to the project’s opponents, a judge on Oct. 5 dismissed a lawsuit filed by the Save Our Seaport Coalition to stop the construction of the $850 million tower.

“The D.E.C. [Department of Environmental Conservation] and [Howard Hughes Corporation] have treated this like it’s a forgone conclusion, and we refuse to back down as parents, to make sure that our kids are going to be safe while they’re in school,” said Grace Lee, whose children attend the neighboring Blue School.

Lee and Hellstrom are two founding members of Children First, a grassroots organization that opposes the development of the Water Street site.

“What we want to see happen is a development process and a Brownfield cleanup remediation that takes into account the safety and the health of our children and does not disrupt their learning and education after two years of a pandemic,” Lee stressed.

Christopher Marte, the Lower Manhattan councilmember-elect, said, “It’s really disrespectful that our state agencies understand how threatening this is to our children, seniors and community in general, but refuse to do anything realistic about it. It’s a failure of government.

“We have to make sure that we hold our electeds who are going to vote on this ULURP to the fire, and make sure they add every single protection,” Marte added. “As the next councilmember, I’m not going to let Howard Hughes do anything in this district unless they protect our residents.”

Claudia Ward, a Seaport resident whose child goes to the Peck Slip school, said, “I think it’s an outrage that they’re just pushing forward with what could be a terrible toxic situation for our children. They’re gonna drill holes, possibly into mercury, right here, while school is in session.

“I would like it not to be some megatower that’s just going to make Howard Hughes rich,” she added. “I think that’s an outrage, too.

“It’s an absolute outrage and people need to know about it, get involved and stop them from doing this. It’s shocking.”

A Howard Hughes Corporation spokesperson, in a statement, assured that the cleanup would be done safely and that the project, in addition to a market-rate housing, would include a portion of affordable housing.

“We are committed to the safe and thorough cleanup of the 250 Water St. site, which will occur under the oversight of the New York State Department of Environmental Conservation and Department of Health, just as hundreds of similar projects have been safely remediated across the state,” he said. “Throughout that process, we will work closely with the Peck Slip and Blue schools to minimize any impact to operations and ensure a safe learning environment.

“More broadly, we are hopeful that our neighbors will embrace the opportunity to welcome 80 families earning around $45,000 to an area where the median household income is more than $150,000, all made possible through a safe and thorough cleanup and temporary construction period.

“We are pleased that state D.E.C. and D.O.H. have approved our proposed Remedial Action Work Plan, noting that ‘the remedy is protective of public health and the environment,’ and we look forward to implementing that plan under state oversight and in close coordination with the community’s environmental consultant.”