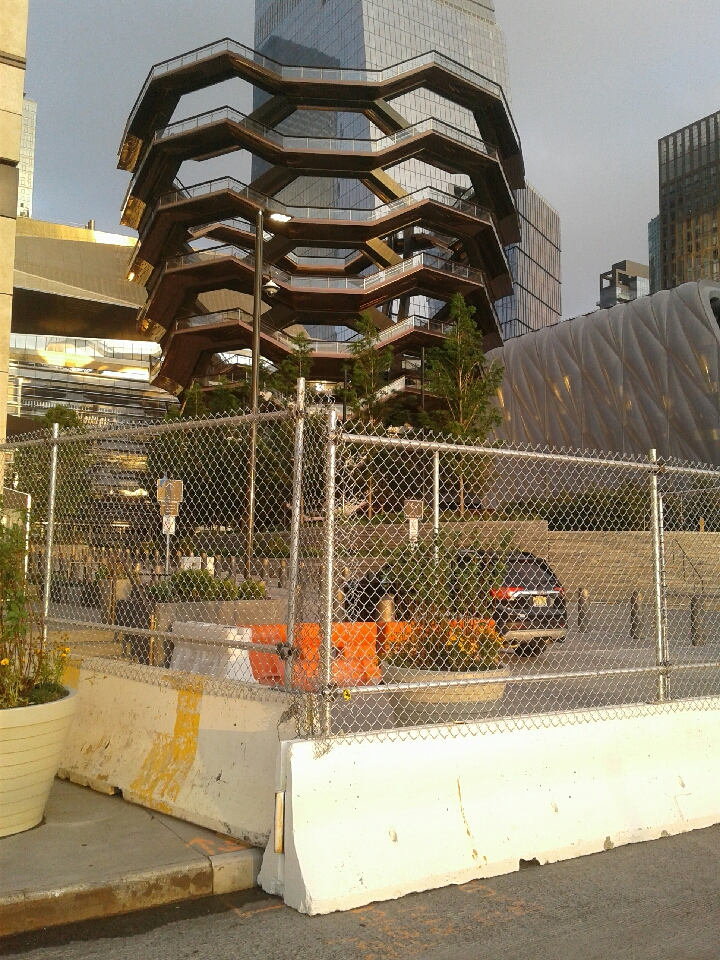 Jersey barriers, chain-link fencing and a large solid wall block off access to Hudson Yards along 11th Ave. (Photo by The Village Sun)

BY THE VILLAGE SUN | Hudson Yards is living up to its reputation as a “gated community,” literally.

And that served it well during the rash of looting that hit the city during the end of May and early June.

Rampant looting in parts of Manhattan was widely reported and documented in video, including in Soho, along Sixth Ave. in Chelsea and in Midtown, where Macy’s — a landmark bastion of American commerce — was overrun by swarms of looters.

But Hudson Yards was mostly spared. According to anecdotal reports from doormen in a couple of the residential buildings in the new neighborhood, the Neiman Marcus, at 10th Ave. and W. 31s St., had some windows smashed, and may or may not have been looted.

However, apart from that one store, the retailers in the so-called Shops & Restaurants at Hudson Yards — many of them coveted high-end brands — were not ransacked.

The reason, apparently, is because the gated West Side community actually had literally walled itself off weeks before the police killing of George Floyd in Minneapolis on May 25, which triggered nationwide protests and, unfortunately, some opportunistic looting.

Basically, it seems that Related Companies, the primary developer of Hudson Yards, decided to seal off the swanky site during the “New York State on Pause” shutdown, which was ordered by Governor Cuomo due to the coronavirus pandemic.

A doorman in one of the new residential buildings told The Village Sun that the concrete Jersey barriers topped by shiny new chain-link fencing along 11th Ave. were definitely installed well before Floyd was slain. He added that some work had been done on a driveway, which he thought possibly might also have been a reason the fencing.

Also part of the new barrier system, a large semicircular solid wall with illustrations and slogans on it blocks off the steps leading up to The Vessel interactive sculpture, the centerpiece of Hudson Yards.

However, a tight-lipped security guard manning the gateway on 11th Ave., on the development’s western side, and his supervisor would not explain why or when the new barriers were added, instead providing this paper with a contact for Related Companies communications.

While this reporter was subsequently talking to the doorman mentioned above, the guard and concerned supervisor briskly walked over to end the conversation.

A Related spokesperson did not respond to requests for comment.

But the barriers — whatever the reason why they were installed — and security have done their job.

It’s not the first time Hudson Yards has been linked to a wall. This past January, architecture critic Michael Kimmelman, writing in The New York Times, reported how Related was mulling elevating the western edge of the second part of the megaproject, the development above the Western Rail Yards, to create an exclusive promenade atop a 700-foot-long wall.

“Among other things, the wall would visually and perhaps otherwise obscure public access from the High Line and from the street into the yard, turning Related’s development into a man-made promontory, its occupants gazing down on the High Line’s visitors,” Kimmelman wrote.

After pressure from local politicians, Related backed off from the plan for the wall.