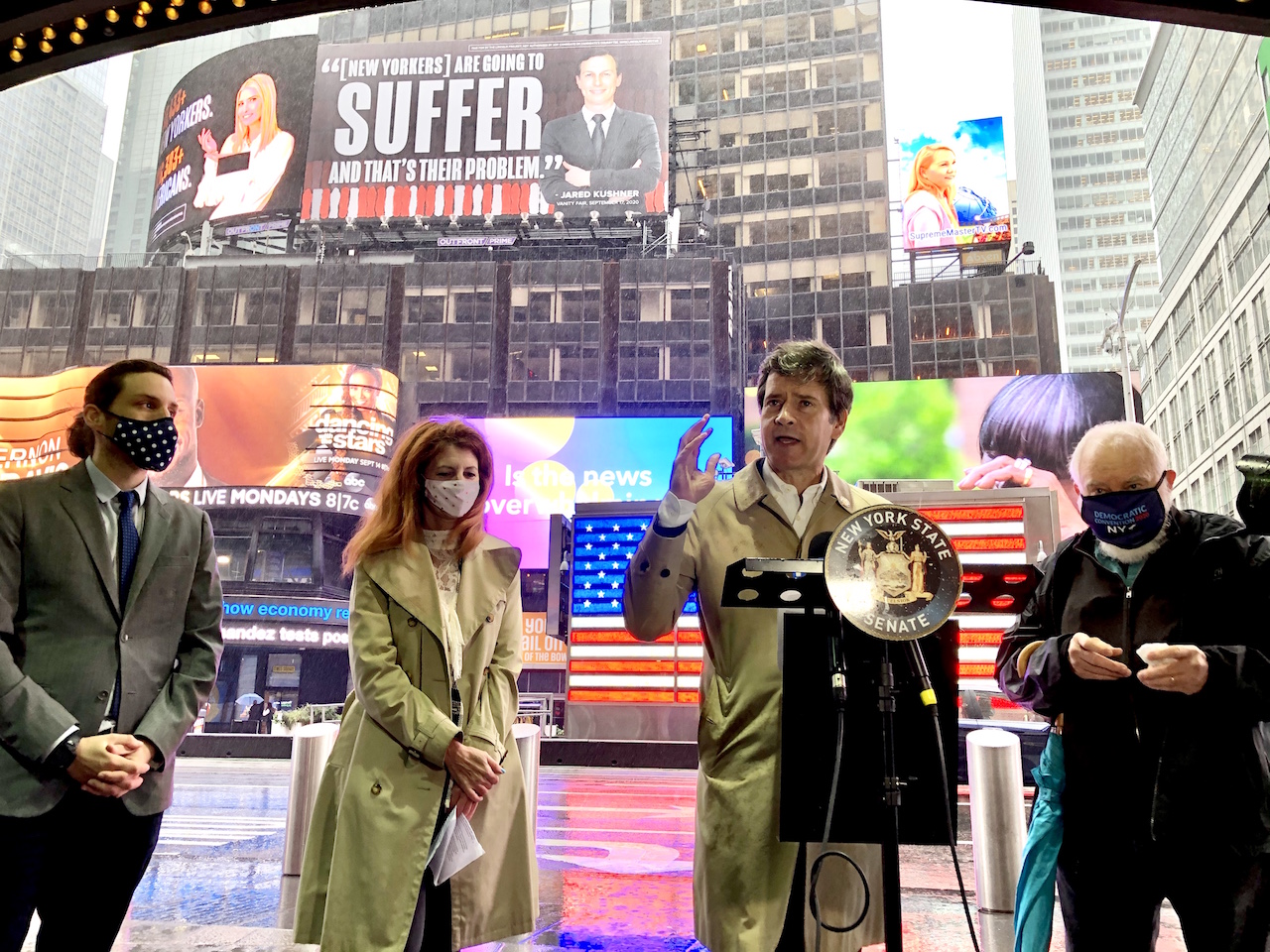 Hoylman SLAPPs back at Trump, Jvanka in Times Square

BY THE VILLAGE SUN | With the giant smiling faces of Ivanka Trump and Jared Kushner looming behind him on billboards as a backdrop, state Senator Brad Hoylman on Thursday called out the conservative power couple for threatening to sue over the signage.

More to the point, Hoylman rallied in Times Square with free-speech advocates to decry the use of Strategic Lawsuits Against Public Participation, known for short as SLAPP suits. President Trump has frequently employed SLAPP suits to quash any criticism of him, Hoylman and the event’s other speakers said.

The billboards of the president’s daughter and son-in-law, on the east side of Broadway at 44th St., were funded by the Lincoln Project, a Republican group that is working to unseat Trump. The one featuring Ivanka (the image is from a photo of her holding a can of Goya beans) cites the number of COVID deaths both in New York City and nationwide. The sign featuring Kushner sports a quote attributed to him by an anonymous source that ran in Vanity Fair magazine: “[New Yorkers] are going to have to suffer and that’s their problem.” In the quote, Kushner reportedly was accusing Governor Cuomo of not working hard enough to get PPE for the state.

Ivanka and Kushner have threatened to sue OutFront Media, the billboards’ operator, unless the Times Square signage is taken down. Hoylman scoffed that their maneuver is a typical SLAPP suit, or as he put it, “entitled bullies suing, though they had no case.”

“They only have facts on them. Facts,” he stressed of the two billboards. “But we know that the Trumps and the Kushners don’t like facts.

“They knew they had no basis to sue but they feel entitled to bully away our First Amendment. Threatening critics with lawsuits to shut them up has been a page out of the Trump family playbook for years. SLAPP suits have long been Donald Trump’s go-to method of silencing dissent.”

Targets of Trump’s SLAPPs, the state senator said, have ranged from political opponents and advertisers to documentary filmmakers and “countless journalists,” as well The New York Times, Washington Post and CNN.

In April, for example, President Trump’s campaign filed a SLAPP suit against a Wisconsin TV station that aired an ad critical of his handling of the COVID-19 crisis. Similarly, in February, the campaign sued the New York Times over an op-ed that claimed there was a conspiracy between Trump’s 2016 campaign and Russian agents.

“The goal of SLAAP lawsuits isn’t to win, but to intimidate, to harass, to bankrupt opponents,” Hoylman explained, “and crucially to dissuade others from speaking out by chilling free speech.”

SLAAP suits brought by well-funded plaintiffs can force defendants to cave in due to mounting legal costs. But current legislation by Hoylman in the Senate — and sponsored by the Assembly by Helene Weinstein — which would strengthen and expand the state’s anti-SLAPP protections passed the State Legislature in July and has been called up by the governor for his signature.

Hoylman, who is chairperson of the Senate Judiciary Committee, noted that, under his bill, attorney fees would be awarded to successful defendants in SLAPP suits. If the measure passes, New York would join California in having the strongest anti-SLAAP lawsuit protections in the nation.

Longtime tenant advocate Michael McKee, treasurer of TenantsPAC, was a defendant in a SLAPP lawsuit brought by the real estate industry.

“The landlords sued me and my organization for $40 million two years ago, hoping to silence my advocacy for tenants and limit my organization’s ability to support the [political] candidates we choose,” McKee said. “That didn’t work. They continued the lawsuit in 2019, hoping to use the courts and threats of financial ruin to block our efforts to win a historic strengthening and expansion of the tenant protection laws. That didn’t work either. They are continuing the lawsuit even after the Legislature passed the Hoylman-Weinstein anti-SLAPP bill. This is sheer harassment, which this bill will prevent from happening to other organizers and advocates in future.”

Danielle Brecker, co-leader of Empire State Indivisible, noted that Trump filed his first SLAPP suit back in 1984 against Paul Gapp, the Chicago Tribune’s Pulitzer Prize-winning architecture critic, demanding $500 million. Gapp had dared to criticize Trump’s dream of constructing the world’s tallest building, at 150 stories, at Riverside South on the Upper West Side; Gapp called it “one of the silliest things anyone could inflict on New York or any other city.”

“Bill S.52A /A5991A, sponsored by Senator Hoylman and Assemblymember Weinstein needs to become law,” Brecker declared, “so we can end Trump’s predatory misuse of our legal system as the American people end his presidency.

“Trump is not alone,” she added. “Powerful people, big corporations and other entities use SLAPPs to shut down our First Amendment-protected right to free speech.”

“Free speech isn’t free when the wealthy and powerful weaponize the courts to punish truthful reporting and criticism,” he said. “Expansion of anti-SLAPP is urgently needed to safeguard our First Amendment rights.”

Hoylman and Weinstein’s legislation expands on the existing anti-SLAPP lawsuit statute by covering speech (or other lawful First Amendment conduct) related to an issue of public interest. If a defendant’s speech or activity falls under the protection of the newly broadened statute, judges will have the ability to dismiss these cases and require the entity who brought the meritless lawsuit to cover the defendant’s legal fees.