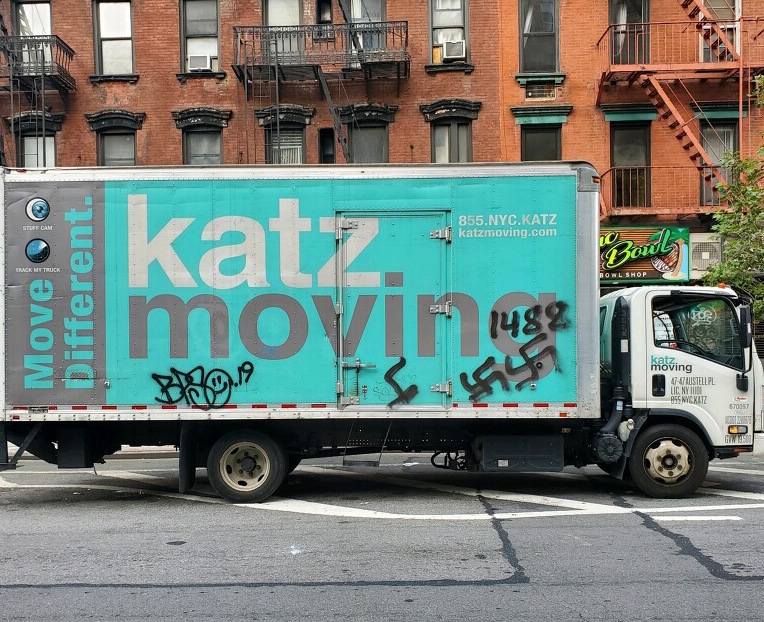 State Senator Brad Hoylman is calling for the arrest of whoever spray-painted anti-Semitic and white supremacist graffiti on a truck that was spotted in the East Village.

Early on Fri., Sept. 25, a constituent in Hoylman’s district noticed the hateful black markings on a moving truck with a Jewish-sounding company name on First Ave. between Second and Third Sts.

The scrawls on the Katz Moving truck including backward swastikas and the number 1488, signifying the white supremacist “14 Words” pledge and 88, which is known to mean “Heil Hitler.”

The East Villager notified Hoylman’s office, and Hoylman reported the hate crime to both the New York Police Department and the Anti-Defamation League, and also posted on Twitter about it.

“Hate is not welcome in our district, in Manhattan or in any other part of our city,” the state senator said. “More than half of New York City’s hate crimes in 2019 victimized Jews, a clear outgrowth of the hate groups emboldened and tolerated by President Donald Trump. The perpetrators of this attack must be caught and held accountable.

“Remember, close to 40,000 Jewish Holocaust survivors live in New York City,” Hoylman said. “It hurts my heart to think that the many people who found refuge in America are still being targeted by this hateful ideology. Go to hell, Nazis.”