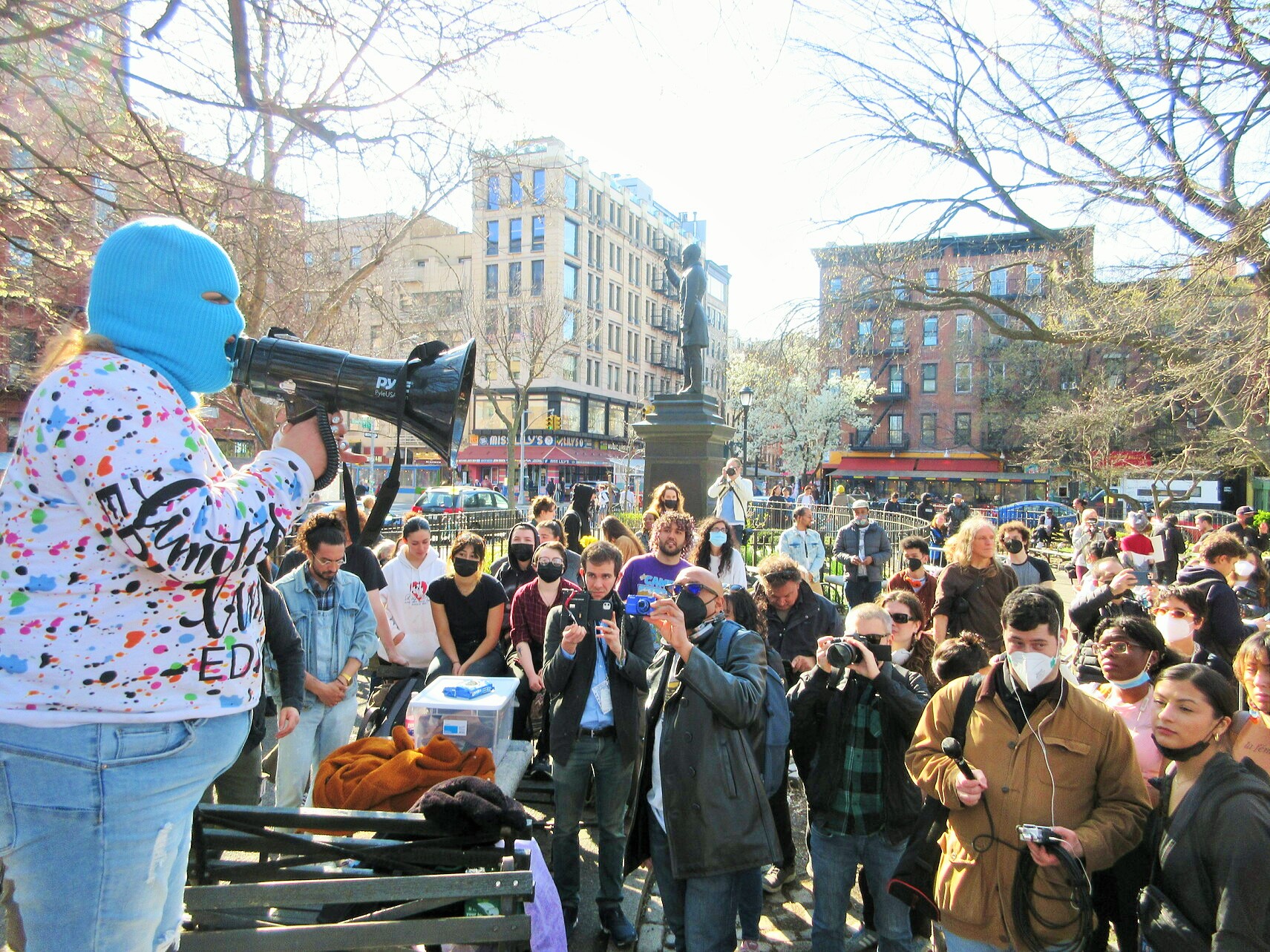 Josephine Perez, who has lived on the streets, addressed the protest in Tompkins Square Park. (Photo by Dashiell Allen)

BY DASHIELL ALLEN | Police officers and sanitation workers descended on the East Village on Wednesday as they cleared a four-tent encampment at E. Ninth Street and Avenue B, following a seven-hour standoff that ended in six activists and one homeless man arrested.

In recent weeks, Mayor Eric Adams has been ramping up homeless “encampment sweeps” throughout the city, calling their conditions “dangerous,” and suggesting that the individuals living in them should instead move into the city’s shelter and Safe Haven systems.

The sweep of the East Village’s “Anarchy Row,” comes after police cleared a different encampment under the Brooklyn-Queens Expressway two weeks ago.

Out of at least 239 encampments swept, meaning cleared, since Adams took office, as little as five people have accepted resettlement in shelters, according to reports.

As amNY has reported, in most cases, the houseless individuals formerly residing at encampments remain in the same general area. According to the city’s current policy, they are allowed to sleep outside — just as long as they don’t have a tent or a large amount of possessions.

At a protest on Friday afternoon in Tompkins Square Park organized by the grassroots organization Brooklyn Eviction Defense, homeless activists slammed the mayor’s new policies, contending that permanent housing is the only solution to street homelessness, given the dangerous and unsanitary conditions of the shelter system.

“D.H.S. is not gonna help us, the shelters are not gonna help us,” said an activist with the Brooklyn-based group, referring to the city’s Department of Homeless Services. “We are out here with two very clear demands. The first one is an immediate end to the violent sweeps, and our second demand is clean, safe, community-controlled housing for every single unhoused person in New York City.”

“Welcome to my home,” said Sinthia Vee, a longtime homeless resident of the neighborhood who had been living in the recently cleared encampment, addressing the crowd of reporters and concerned activists.

“Our message is really clear: Housing is the solution to homelessness. And really that’s about all I’ve got to say.

“I have no doubt we can solve our problems as a community and we don’t need top-down authority,” she said. She added that she believes it’s possible to create a balance between allowing people to live on the streets and not making neighbors in the community feel unsafe or uncomfortable.

This isn’t the first time Vee has faced sweeps from the city. She told the crowd about her experience in 1988 and ’89 when a similar fate befell Tompkins Square Park during an infamous police crackdown over the imposition of a curfew on the park.

“There were busses on all four corners of the park full of police — the community rose up and fought back, which I was honored to be a part of,” she recalled.

In the following years, the city would also sweep away the park’s homeless “Tent City.”

“It was scary and abusive and nightmarish,” she said of the shelter. “It scared the living hell out of me, and they called my mother and outed me.

“I slept in this park, Tompkins Square Park. I’ve slept in Washington Square Park. I even slept in 42nd Times Square, Port Authority,” she said. “I am a transgender, Puerto Rican, Indian. … I have been brutalized by the police in many moments.”

Gianni, who currently lives in a shelter on Wards Island, described himself and his fellow occupants as “mentally incarcerated.”

“There’s no locks in our rooms. The bathrooms [have] no privacy,” he said. He also slammed the shelter system for calling their reception area “a bubble,” saying that’s commonly used as a term in jails.

“Whenever there’s someone starving in the streets and doesn’t have a place to go,” he said, “it don’t matter if that person is over your age — you guys gotta make it your responsibility to make sure when you see them…bring them a hot meal, because a hot meal warms up the heart.”

Eric Rossi, a former East Village squatter, called for a mass housing movement, chanting, “When people freeze while buildings rot, what do we do? Squat! Squat! Squat!”

“When I came here in the 1970s, I had a room in a hotel for 100 a month,” he said. “When I came seven years later I had an apartment for $250 a month. Within five years they tripled the rents in New York. By 1982, you had double rents. By 85 the rents were tripled. So this is not just a problem of the homeless looking for shelter. This is everyone’s problem.”

A tree-stump artist and immigrant from Zimbabwe, who didn’t share his name, called on the city’s churches to open up their free space for housing.

“Preachers, pastors, you need to start right now and provide safe housing inside of those tax-free…buildings,” he said. “I’m not homeless yet. I’ve taken myself into a homeless shelter just to find out. I took myself to the Bowery Homeless Shelter, because I asked these guys who sleep in the park, why don’t you go to the shelter, man? Everyone I’ve asked said I would never live in that cesspool. I came out with hair lice. Came out with stinky fungus on my feet. Sleeping in a f—ing dorm room that had no windows.”

Mayor Adams stood by his policy to rid the city of homeless encampments, saying on “The Brian Lehrer Show” on Friday, “You have the legal right, according to law, to sleep on the street. You don’t have a legal right to build encampments.

“When I looked at some of those encampment sites…I saw people living in human waste,” he added. “Drug paraphernalia, no showers, no clean clothing. Living like that, that is not dignified.”

After the speeches were over at the Friday afternoon protest, the crowd payed their respects to the former encampment, underneath a construction scaffolding outside of the former East Village community center CHARAS/El Bohio.

Nico, an activist with Brooklyn Eviction Defense, told The Village Sun later that he doesn’t believe that pro-development YIMBYism (Yes in My Backyard-ism) will solve the city’s housing affordability crisis.

“It’s just silly, it doesn’t make any sense,” he said. “Public housing, community-controlled housing in our backyard. The only way to solve the ‘housing crisis’ is to give control [to] the people who live in the houses, and not big developers, because that just keeps the recursive logic of capitalism and private property in place. It doesn’t do anything to uproot the thing that actually causes houselessness, that causes the housing crisis.”

The crowd of more than 100 people then marched to Washington Square Park, where they merged with other protests, including one against Russia’s brutal invasion of Ukraine.

The seven current or formerly homeless individuals who spoke at the protest were in unanimous agreement that low-cost housing — not shelters and not encampment sweeps — is the best way to end street homelessness.