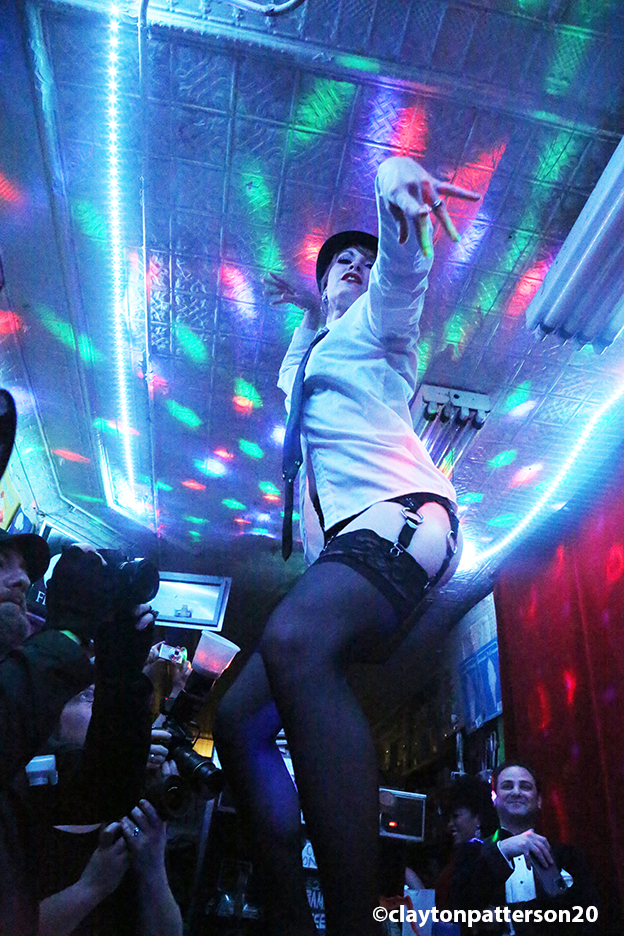 BY LINCOLN ANDERSON | Ray Alvarez is the definition of a grinder. The hard-working East Village merchant, in his eighth decade, continues to pull the overnight shift at his Avenue A hole-in-the-wall, serving up soft serve ice cream, Belgian fries, beignets and much more to the hungry masses.

For all his grinding, he was rewarded in kind with grinding of another kind Monday night, as a bevy of beauties worked it on his well-worn countertop at his 87th birthday party.

The affair was pushed back from early January because Ray — real name Asghar Ghahraman — had to go into the hospital for hernia surgery.

Every year, Ray’s birthday party has a different theme. Past installments have included “A Night of Persian Delights,” “Retro ’80s” and last year’s “Fallen Rock Stars.”

This year’s extravaganza for the egg cream maestro was billed “The Golden Age of Burlesque.” The lineup included a mix of Ray’s all-stars past, plus new dancers, including Pearls Daily, Gal Friday, Peekaboo Pointe, Stormy Leather and The Maine Attraction.

Ray has manned his store since before the Tompkins Square riots of 1988, when taxi drivers wouldn’t even venture east of Avenue A and drug users would line up on the sidewalk to score in abandoned buildings turned shooting galleries. Ray made it through those tough years.

Now, in the digital age, it’s a whole new Instagramable chapter as he and his colorful Ray’s Candy Store have become Internet famous worldwide.

Matt Rosen, once again the dapper birthday emcee and one of the event’s organizers, gave an exhaustive rundown of all the newsworthy Ray events and press coverage from  the past year: An artist designed “Ray shoes” for Bergdorf Goodman; a former worker at the Avenue A fried-Oreos hot spot wrote a play about Ray; Kendall Jenner and Kim Kardashian visited Ray’s, were wowed and posted on Instagram about it; an artist repainted the storefront (covering up graffiti legend Chico’s version that featured the late blogger Bob Arihood, Ray’s greatest documenter); tourists keep flooding in from Germany, Japan and all over after reading about Ray’s online; and Ray — in his stage debut — hefted a heart in an opera at Theater for the New City because, as Rosen put it, “he’s the heart of the East Village.”

The emcee recalled an anniversary of sorts, how the community rallied to Ray’s rescue 10 years ago with a benefit concert at Theater for the New City. The merchant had been having a hard time meeting his rent that winter. Now, though — again, thanks to the Internet — with apps like Uber Eats and Grubhub, Ray is doing much better.

After the dancers had heated up the countertop and buried Ray under an avalanche of brassieres, bustiers and G-strings discarded during their striptease acts, it was time for the piece de la resistance, the cake from Veniero’s. The strippers gave the Avenue A Ironman cake and kisses.

Ray said he wanted to keep working till 100 — and can you blame him?

In an ever-gentrifying area, Rosen said that, at least, “This one staple of the East Village can live on as long as Ray decides to stay upright.”

And Ray’s friends will always be there for him, he assured, adding, “In the East Village, we take care of our own.”

Ray jumped ship from the Iranian navy to find his American Dream. President Reagan granted amnesty, but because — as Ray only found out later — his green card was mailed to the wrong address, his residency was in legal limbo for years.

When Ray finally got his U.S. citizenship in 2011, he was asked to translate his feelings into Farsi.

“Nam pustan noni conjam,” he said then, which literally means, “I can’t fit in my skin” — as in, “I’m so happy, I can’t contain myself, I’m jumping out of my skin.”

His flesh-filled birthday party Monday night was another one of those jumping-out-of-your-skin moments of happiness.