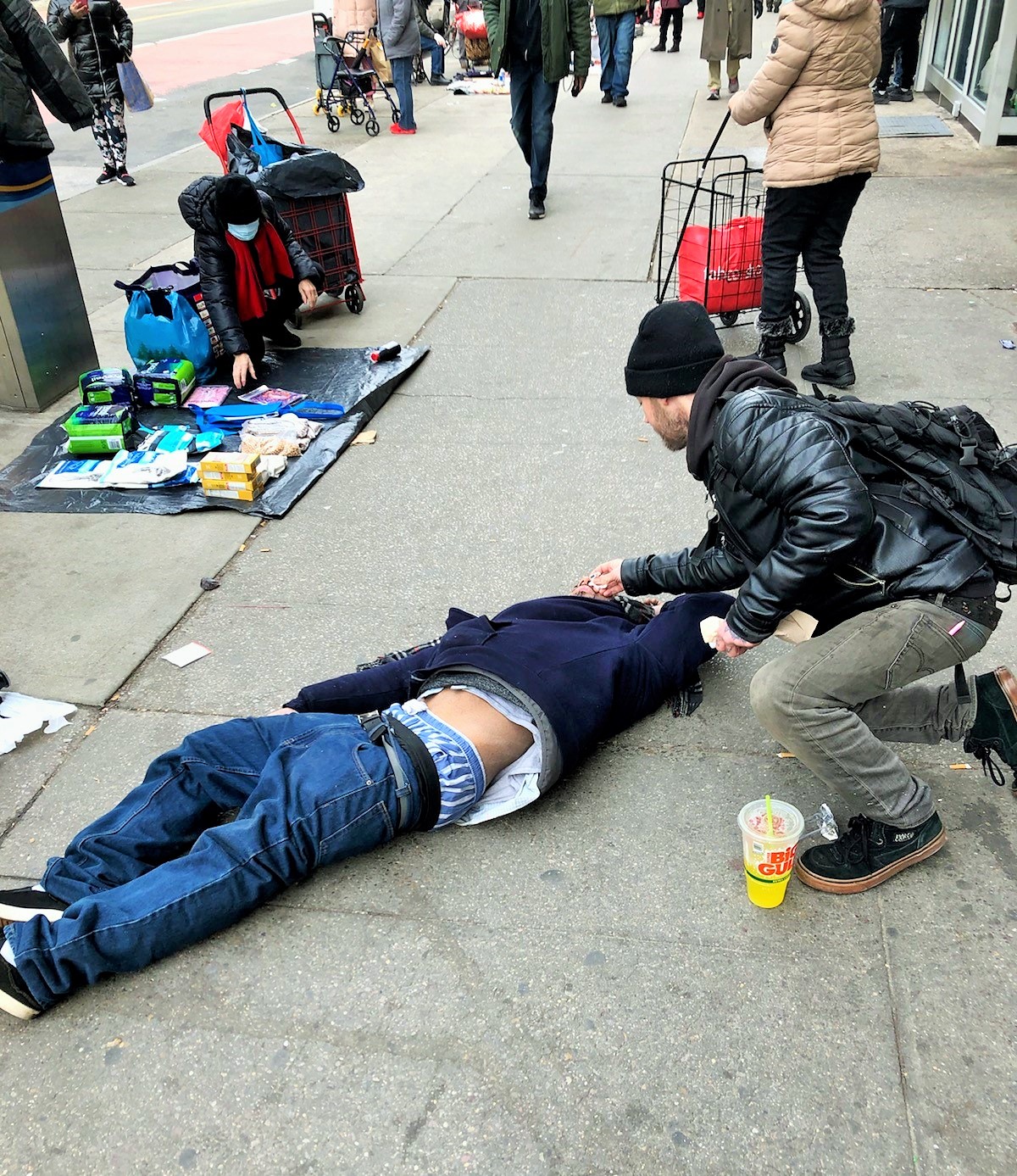 BY KEITH J. KELLY | A homeless comic book salesman on E. 14th St. on Saturday may have saved the life of a man suffering an apparent drug overdose.

The vendor sprung into action and administered a Narcan dose to another apparently homeless man who had collapsed onto the sidewalk in front of the illegal street bazaar that has become a fixture at the corner of 14th Street and First Avenue.

“I haven’t eaten in two days, but I always carry five Narcans with me at all times,” said James Miller, who knelt down to administer the dose to the unidentified man.

He said he did not know the identify of the stricken individual.

“I lost my best friend on October 31st,” Miller noted.

The unidentified victim, who appeared to be suffering from a heroin overdose, was breathing erratically with his eyes closed and twitching violently. Shortly after Miller gave him the Narcan dose, the still-unconscious man began foaming at the mouth.

An ambulance arrived minutes later. An E.M.S. medic rubbed the victim’s chest and the disoriented victim slowly revived. He was able to walk into the waiting ambulance from Mount Sinai Hospital with the assistance of the medics.

“Another few minutes and he would have been gone,” Miller said.

E.M.S. workers had been called by one of the illegal street vendors who have been using the south side of E. 14th Street just east of First Avenue as an impromptu vendors market since the summer of 2020.

The makeshift bazaar where goods are sold off blankets spread on the sidewalk has been a source of consternation for many residents of nearby Stuyvesant Town and Peter Cooper Village and local politicians. Some locals say they are afraid to walk there and have labeled it the “Thieves Market.”

Only a day earlier, police officers had engaged in one of their periodic clearings of the vendors. But by Saturday the vendors were back in force, selling everything from canned salmon and peanut butter to shoes, stray articles of clothing, hand tools and electronic gear.

When two police officers arrived shortly after the E.M.S. workers did, they asked the vendor who had called in the report to E.M.S., “Did you get a permit yet?” When the unidentified vendor said, “Not yet,” one of the officers said, “You have to start packing it up.”

But, in short order, the two cops departed and the bazaar was back in business.