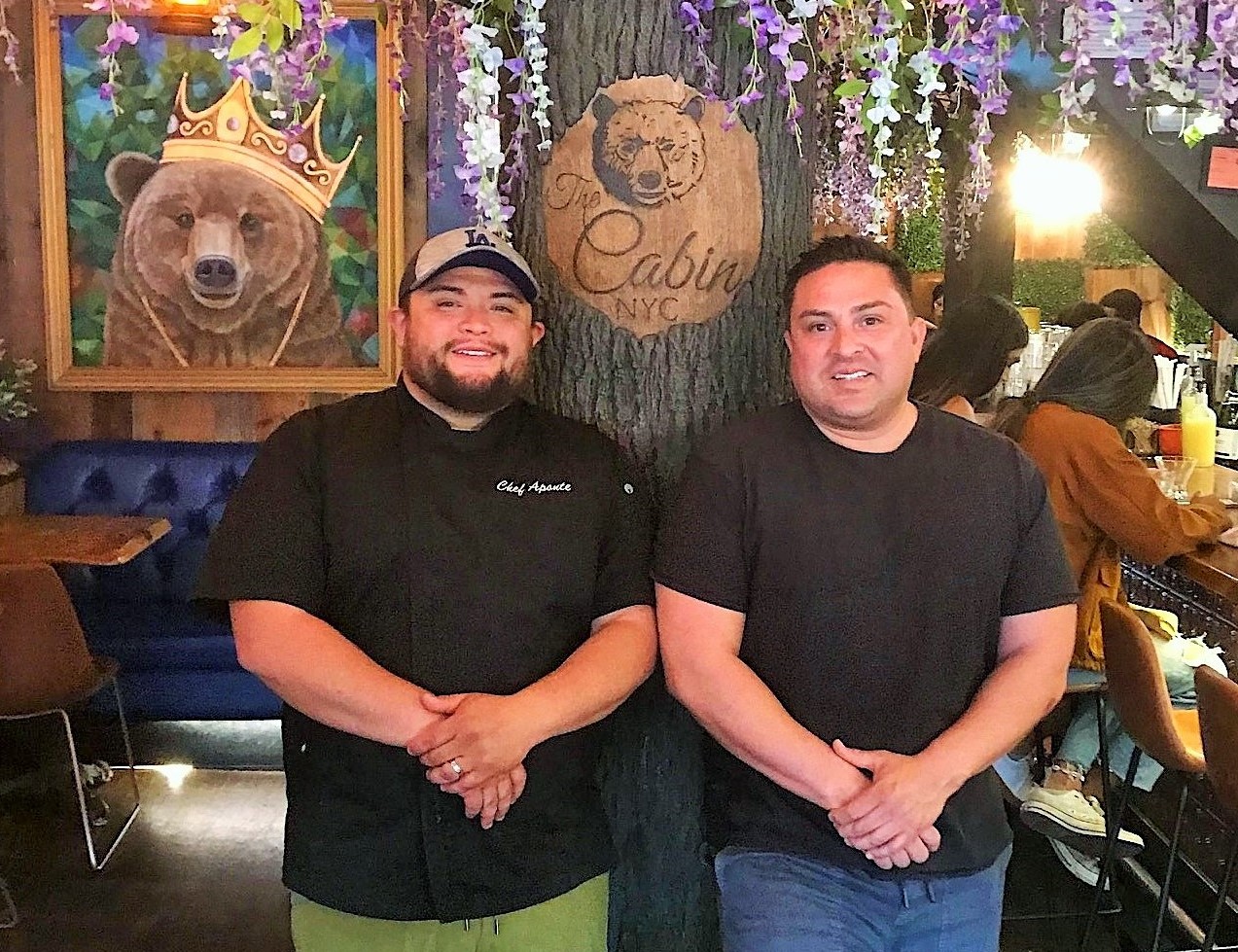 Brothers Dennis Aponte, left, and Joey Aponte inside The Cabin NYC. Dennis is the restauarant's head chef and Joey is the owner. (Photo by Bonnie Rosenstock)

Homegrown and homemade: The Cabin NYC

BY BONNIE ROSENSTOCK | Joey Aponte was 13 when he, his mother and two brothers moved away from the Vladeck Houses on Madison Street on the Lower East Side. But he always knew he would return to the community. A little more three years ago, he inaugurated his dream restaurant, The Cabin NYC, at 205 E. Fourth Street between Avenues A and B. He felt at home.

Over the years Aponte had variously worked as a dishwasher, bartender and restaurant manager and opened up a lot of restaurants for other people around the country. He even had a nightclub in Midtown. But he always remembered his roots.

“This is the first time I am creating for myself and my family,” he said. “There’s no better place to open up a business than on the Lower East Side.”

In the 1980s, the Lower East Side was “really bad,” Aponte recalled, “and the schools were worse. It wasn’t about teaching. It was about keeping order, going through metal detectors, bullying and teachers as babysitters.”

His mother, Rosa Aponte, worked three jobs to take her sons out of the beleaguered ’hood. She was working full time as a housekeeper at Gouverneur Hospital on Madison Street the first time she was turned down for a bank loan. Undeterred, she took on a second job cleaning banks nearby. She was turned down again. So during her remaining waking moments, she cleaned private homes.

“We kids were raising ourselves at this point,” Aponte recalled. “The Boys Club on East 10th Street was like our daycare.”

In 1995, Rosa finally got that loan approved and moved her sons to a house in Bellport, on the South Shore of Long Island, an area of the rich and famous, but “with a diverse part, too,” Aponte noted. “She’s my superhero. She tried to give us a better opportunity.”

In 2008, Rosa retired from Gouverneur after 30 years of service. Now 74, she still returns to the neighborhood to attend St. Mary’s Church on Grand Street.

As a Latino kid from the Lower East Side — his father, who is out of the picture, is Puerto Rican; his mother is Peruvian — Aponte was so far behind in his new school that they put him in a bilingual class.

“It was tough going from the ’hood to Bellport,” he recalled. “The culture on the Lower East Side was to get a graffiti haircut, so I had my name on my head. In Bellport I was a thug.”

But nothing says popularity and acceptance like being a star athlete. In high school he was a running back, with a Hall of Fame coach. He became an all-American in lacrosse and played pro for a year. He went to a junior college in Maryland and graduated from Farmingdale State College on Long Island, having studied security systems and psychology.

“I went from barely graduating high school and being the last in my class to being successful now,” he said.

Aponte, 40, describes The Cabin NYC as “an elegant place made for adults 25 and older.” It gets high marks on Yelp as an East Village go-to destination. “This is the place to come for dinner, cocktails or as an after-dinner spot,” he said.

The restaurant comfortably seats about 40 inside, with leather banquettes that hug the perimeter, and another 20 seats in the outdoor yard. (There’s also a two-person wicker chair in an alcove for more intimate conversations.) The rustic décor features three towering birch trees, made from natural wood, that rise out of the floor; Aponte sought out the company that worked for his inspiration, Walt Disney. Faux lavender flowers cascade down wood-paneled walls and poles and from ceilings. (Summer will feature red, pink and white flowers.) Paintings by Isabelle Favette, “Biggie Bear” and “2pacFox,” named after the rappers, adorn the walls.

Aponte’s younger brother, Dennis, 34, is the place’s head chef. Although he didn’t have formal schooling in the culinary arts, he was mentored by celebrity chef Jordan Andino, who is of Filipino heritage. Dave, 44, Aponte’s other brother, is a bank manager in North Carolina, but his daughter Ivy Lynn, 22, helps out in the kitchen and hosts.

“The Cabin is a place where people can explore themselves,” Dennis said, referring to his own mentoring of promising young people. “I am able to teach the art of cooking here. We look for people everywhere — by talking to them, whether in a Starbucks or on the street. I bring them on, see how they excel, see how much we can bring together flavors and cooking.”

“We teach them how to make our specialty cocktails,” Joey said. “I don’t hire them for what they know, but for their work ethic and how they are as a person.”

All the food is natural, fresh and made from scratch.

“My meat comes from a farm in Pennsylvania,” Dennis said. “We prep everything on a daily basis. Every Monday, the bartenders rotate to crush the ginger, which takes 10 hours, and to make the various syrups. We’re not serving the same Coors or Bud Light like everyone else.”

Specialties include fried Brussels sprouts, Amish fried chicken, bison and ricotta meatballs with pomodoro sauce that takes eight hours to make, and the Jammin’ Bacon Cheeseburger, with ground marinated bison and bacon from Spain. A fav dessert is s’mores with chocolate ganache, marshmallow creme and molasses.

Joey is gearing up to open another restaurant, Clock Out NYC, at 191 Orchard St., with a different menu and focus.

“I want to change the décor every month,” he said. “It will be made for you to live in the moment.”

During the darkest days of the pandemic, Joey helped feed those slammed by food insecurity in the East Village and Lower East Side. He teamed up with LES designer/entrepreneur Freaky Fridge to give out turkeys every year. At first it was out of pocket, but then organizations paid for it.

“I made a lot of meals for the homeless, about 5,000 over the past few years,” Joey said. “I go to the homeless shelters, Tompkins Square Park, the park next to the housing project where I grew up, Henry Street Settlement. I put up posters. Also, across the street from the restaurant, I put out a table for about three years.

“My lifelong goal,” he said, “is to help out this neighborhood as much as possible. I help humanity no matter who they are. My mother raised me this way.”