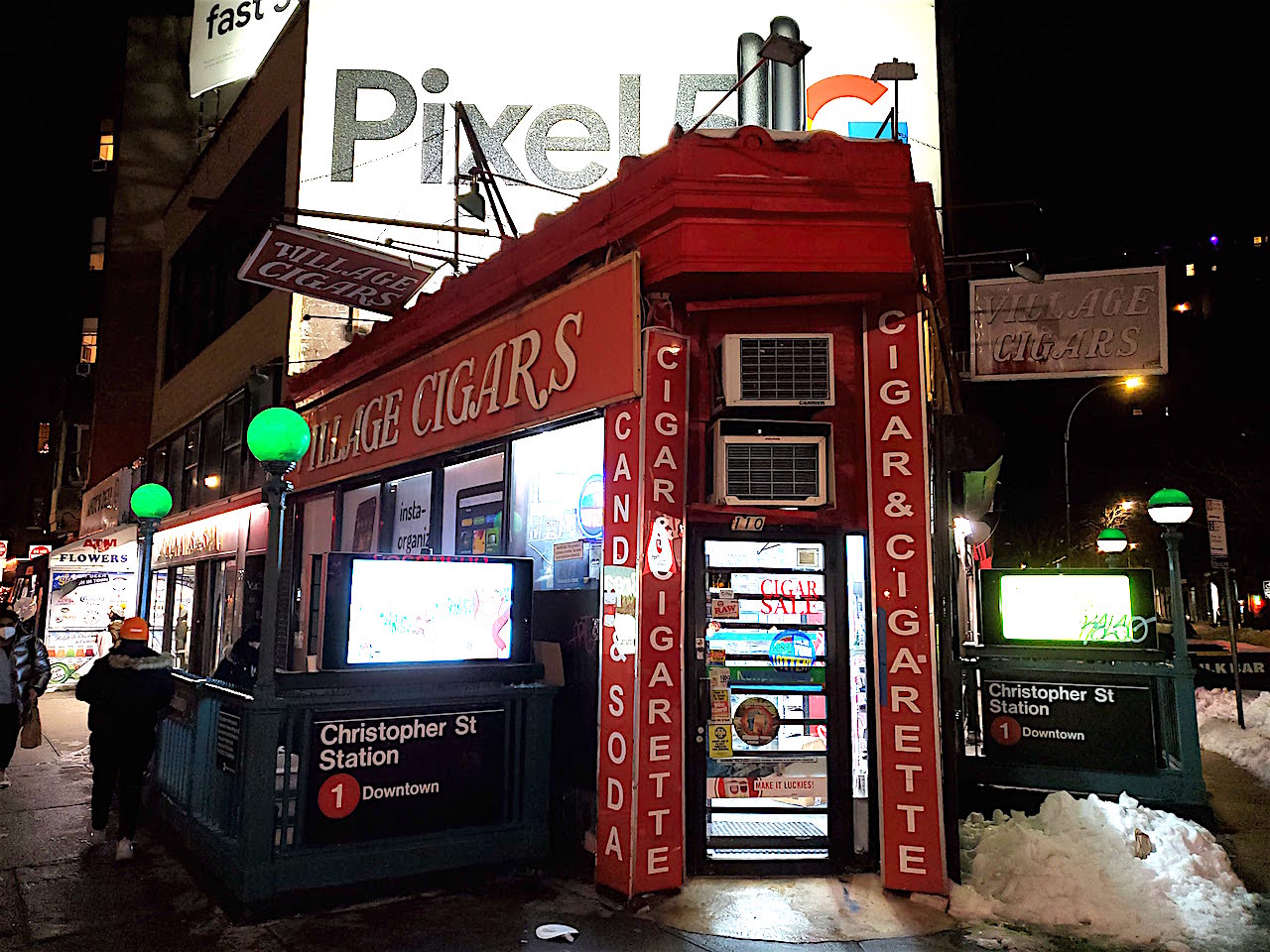 The subject of many paintings, the Village Cigars store is up for sale. (Photo by The Village Sun)

The owner of the Village Cigars building on Sheridan Square is planning to sell it.

Jonathan Posner, part of an LLC that owns the tiny corner property at 110 Seventh Ave. South, told Real Estate Weekly that, due to the pandemic’s impact, holding onto the property is no longer viable.

“Obviously I take great pride in owning such a historic piece of Greenwich Village,” he said, “but I have other properties in the neighborhood that still have very decent income even now. So, really, this building should be in the hands of a user and/or someone who can re-love it and perhaps is enamored with the idea of owning one of the most famous corners in Manhattan.

“The pandemic has detrimentally impacted the property’s retail income and the expense of operating the building continues unabated. We believe the property really requires a fresh new approach.”

According to sources, the tiny building is likely to be offered for around $5.5 million. The property also generates revenue from billboards on top of it.

The site is located in the Greenwich Village Historic District, so demolition or any alteration of the building would first need to be cleared by the Landmarks Preservation Commission.

Also included with the parcel is the quirky Hess Triangle. The 3.5-square-foot wedge of sidewalk outside the store was a former owner’s revenge against the city for taking local properties to extend Seventh Ave. into the Village and build the West Side I.R.T. subway line beneath it.

A surveyor’s error had left the triangle up for grabs, but the former owner of an apartment building on the cigar store site, David Hess, refused to sell the patch of pavement to the city. Decades later, the Hess family sold the little triangle to Village Cigars.

This Thursday evening, Dushyant Patel was behind the counter at Village Cigars. Customers were sporadically popping in and out. A jet-setting lawyer stopped in to stock up on flavored nicotine refills for her e-cigarette. A young guy paid with plastic for a $30 pack of fancy smokes.

Despite the customers whisking in every so often, Patel said the store’s business is off by about 50 percent compared to normal.

“All businesses are bad,” he said of the current economic climate.

A native of Nairobi, Kenya, of Indian descent, Patel has worked in the store for 22 years. He also formerly manned the newsstand across the street on the subway island.

Back in the 1970s, though, the place’s wares were more diverse. According to a photo from that era, the store’s exterior signage said it also sold paperback books, pipes and clocks, plus “rainwear” and “sundries.”

The store does currently sport an electric guitar that doubles as a hookah.

“We had three. Only one left,” Patel noted.

Another of Village Cigars’ claims to fame is that it once sported one of the city’s first Web cams. About 20 years ago, “a French guy who lived nearby,” according to Patel, set up a publicly accessible Web cam — first inside the store, then also outside of the place. The outdoor camera pivoted about 180 degrees, giving a sweeping view of all the action in Sheridan Square.

But about 10 years ago, the Landmarks Preservation Commission ordered that the outdoor camera had to be removed since the building’s exterior is landmarked.

“They won’t even let us change the sign, 80 years old,” Patel said of Village Cigars’ vintage outdoor signage. It wasn’t immediately clear if the signs were really eight decades old, though they definitely do have a vintage look.

After the interview, Patel gave The Village Sun a cigar.