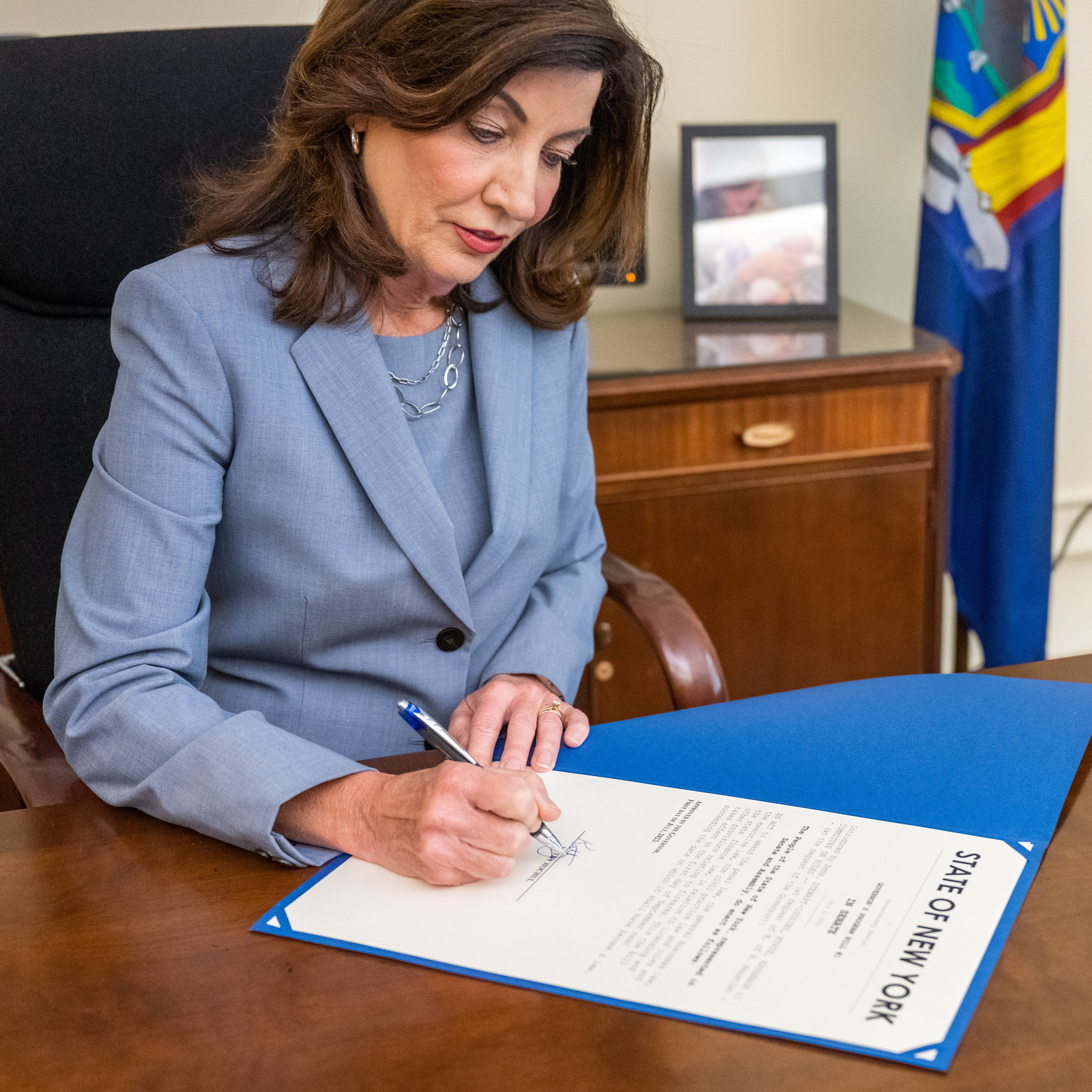 BY CARMO MONIZ | On Friday, Governor Kathy Hochul signed legislation to strengthen gun laws and bolster restrictions on concealed-carry weapons in response to what she called the U.S. Supreme Court’s “reckless decision.”

Among the highlights of the legislative package is that it restricts the carrying of concealed weapons in designated “sensitive areas,” including bars and restaurants that serve alcohol, courthouses, daycare facilities, playgrounds, homeless shelters and domestic-violence shelters, entertainment venues, government buildings, houses of worship, libraries, polling places, at public demonstrations and rallies and in Times Square, among others. The law also makes “no carry” the default for all private property, unless deemed permissible by property owners.

The legislation also establishes state oversight over background checks for firearms and regular checks on license holders for criminal convictions. The package also creates a statewide license and ammunition database. Furthermore, existing laws on sale of body armor, including the type worn by the Buffalo shooting suspect, and the safe storage of firearms, have been srengthened and clarified.

The law will take effect on Sept. 1.

State lawmarkers met in Albany on Thurs., June 23, to address the Supreme Court’s decision to strike down New York’s law requiring a license to possess a firearm.

The court’s decision came after a push for greater gun control from lawmakers in New York and Washington, D.C., and follows recent shootings in Buffalo and Texas that killed a total of 31 adults and chilren.

“Because we had this blanket law, in terms of public licensing of handguns, now that that’s been thrown out, we now we need to specify where and when concealed weapons can can be carried,” state Senator Brad Hoylman said, speaking before the Legislature met on June 23. “We’re going to update the standards for issuing these licenses, we’re going to have new application requirements, we’re going to specify sensitive locations and hopefully keep the number of handguns at bay. But already it’s clear guns are proliferating in New York and across the country at a very disturbing rate.”

Assemblymember Linda Rosenthal said she thinks the ruling disregards the precedent set by the Supreme Court regarding states’ ability to create laws defining sensitive areas, and that the next steps in New York should be defining what areas in which guns cannot be carried.

“It’s alarming to think that anyone could could go anywhere with a gun based on this decision, and there are many places in the city or state where it’s inappropriate for people to carry guns,” Rosenthal said. “You can walk into a kindergarten with a gun — just think about that. You can walk into a nursing home with a gun. [These are] all places where people are extremely vulnerable, and would be very dangerous should anything happen with that gun, even if it’s by accident that a gun goes off.”

On June 6, a 10-bill legislation package — including a ban on persons under the age of 21 from purchasing semiautomatic weapons and restrictions on the purchase of body armor — was signed into law by Governor Hochul.

“Our nation has been brought to a moment of reckoning due to weapons of war that have been too easily accessed by those seeking to kill,” state Senate Majority Leader Andrea Stewart Cousins said. “These weapons have made places in our communities, like schools, grocery stores, houses of worship and concerts, places of carnage. In these devastating times in New York and across the nation, we have worked with Governor Hochul, Speaker Heastie and members of the Democratic Legislature to step up and send a message that this path of gun violence is unacceptable and we need real change.”

New York’s gun control laws were already ranked among the country’s strongest prior to the Supreme Court’s decision.

“Clearly, the Supreme Court is thumbing its nose at New York with the Bruen decision that is nullifying our licensing of handguns,” Hoylman said, referring to the concealed-carry ruling. “We’ve taken a step forward with the package in Albany and last week’s package in Washington, but we’ve taken a number of steps backward because of the Supreme Court decision, so there’s a lot more work to do.”

Other changes made in the most recent legislative package include requirements for gun dealers to improve security and employee training, strengthened red flag laws and compulsory inspections of gun dealerships every three years by state police.

Also included is legislation closing loopholes that allowed some modified firearms to evade being designated as a firearm or rifle, as well as the possesion of large-capacity ammunition feeding devices by those who acquired them before these were banned.

Hoylman and Rosenthal backed legislation in the package implementing a microstamping system for firearms and ammunition. Microstamping uniquely marks cartridge cases and bullets every time a firearm is discharged, allowing used bullets and casings to be linked to a specific gun.

Created by Sensators John Cornyn, R-Texas, Chris Murphy, D-Conn., Kyrsten Sinema, D-Ariz. and Thom Tillis, R-N.C., the Safer Communities Act was passed in the Senate and the House more than a week ago.

“I don’t want us to pass a bill for the purpose of checking a box,” Cornyn said on the chamber floor before the bill’s text was released on June 21.  “I want to make sure we actually do something useful, something that is capable of becoming a law, something that has the potential to save lives. I’m happy to report, as the result of the hard work of some senators in this chamber, that we’ve made some serious progress. We know this is an issue that divides much of the country, depending on where you live, and maybe even divides people living in the same household. But I think we have found some areas where there’s space for compromise.”

Hoylman said that, although the federal gun control package includes important provisions, such as funding red flag laws, enhancing background checks for those buying guns under the age of 21, and allowing authorities to review younger gun buyers’ mental health records, the legislation is not sufficient.

“Banning assault rifles and requiring background checks on all gun sales are really important,” Hoylman said. “We need to get guns out of the wrong hands, and those are two important steps that we can take. We have to end the obsession with guns in our society, which is a deep, deeply seated cultural problem. But until then, probably the most important thing New Yorkers can do is elect representatives who will go to Washington and fight for increased gun safety.”