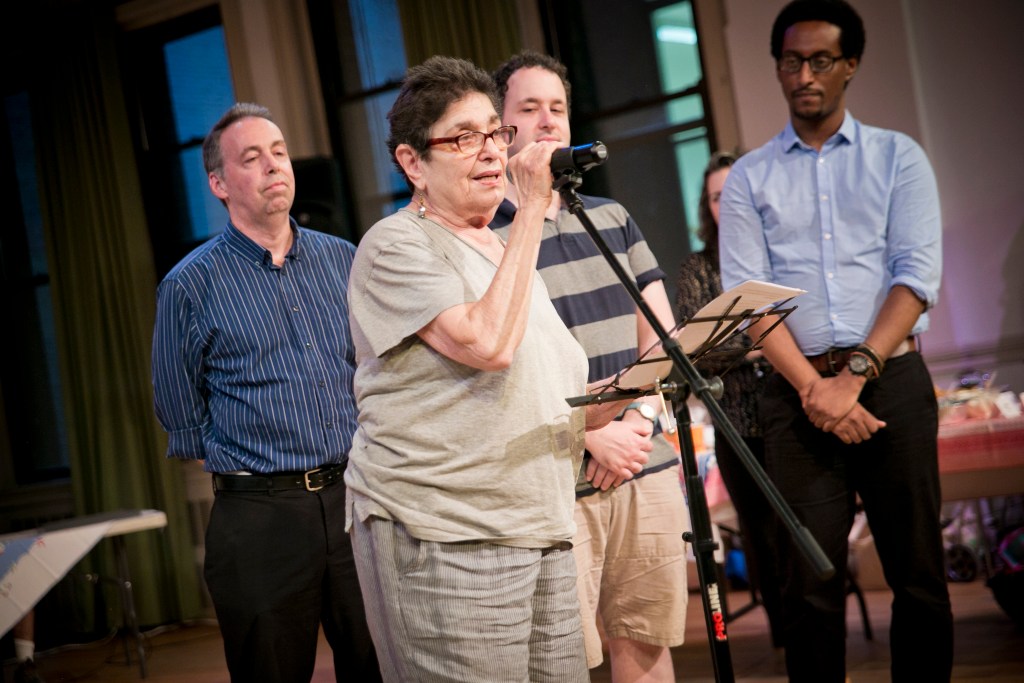 In 2016, Harriet Putterman was named a Lower East Side Community Hero by FAB (Fourth Arts Block). (Photo by Whitney Browne)

BY LINCOLN ANDERSON | Harriet Putterman, a longtime housing and social-justice activist whose zeal for organizing never dimmed, died on April 11. She was 87.

She died under hospice care at her apartment, at E. 18th St. and First Ave., after a brief hospital stay of just a few days. The cause of death was cancer.

During her professional career, Putterman was a community organizer, a social worker, a fundraiser and a housing policy analyst.

A close friend and ally of Frances Goldin, she was involved for decades with the Cooper Square Committee. More recently, she helped lead the citywide Stand for Tenant Safety initiative. She also worked to hold notorious landlord Steve Croman to account. She had an insider view on him — she was one of his tenants. Jared Kushner was another landlord she targeted in her organizing.

Harriet Putterman was born on Dec. 29, 1933, in the Bronx, to Morris Putterman and Sylvia Karg Putterman. Morris, a tailor, died when Harriet was 5.

She went to City College for her undergraduate degree.

“She said she was the first in her family to go to college, thanks to City College’s affordability,” Sharon Goldman, her great-niece, said.

“I was surprised to find out her degree was in English literature!” Goldman said. “She said she chose it because she loved Shakespeare. But she told me her early years going to labor Zionist summer camps in the Catskills and Ontario sparked her interest in progressive issues and community organizing, and she went on to receive an MSW in social work from Columbia School of Social Work.”

Since the 1970s, Putterman was a member of the Cooper Square Committee. Under Frances Goldin and her allies, the committee had beaten back Robert Moses’ urban-renewal plan for the area extending around the Bowery and Third Ave. roughly between E. Ninth and Delancey Sts.

Putterman was involved in the committee’s subsequent negotiations with the city’s Department of Housing Preservation and Development that led to a 1990 agreement with the Dinkins administration to renovate and transfer 20 city-owned buildings to the newly formed Cooper Square Mutual Housing Association to be preserved as permanent affordable housing.

She eventually left Cooper Square to work on other projects, but returned to its board in 2012. She later became a part-time staff member, reengaging on the committee’s organizing work to fight predatory equity, tenant displacement and deregulation of rent-stabilized housing.

Among other major campaigns, Putterman was involved in organizing Croman tenants. This work later prompted the New York State attorney general to investigate and prosecute the infamous landlord, resulting in a settlement for the tenants and a prison sentence.

She also mentored organizers at Cooper Square and in the housing justice movement who focused on the need for passing stronger laws to prevent lead poisoning in apartments, ending warehousing and fighting against illegal hotels.

More recently, Putterman worked with Housing Justice for All (HJ4A) to call for concrete rent arrears assistance by New York State amid the COVID-19 pandemic, which has caused more than 1 million New Yorkers to fall behind in their rent.

Valerio Orselli, the former executive director of the Cooper Square Committee and Mutual Housing Association, knew Putterman as a friend and comrade for decades. He said she was extremely hard working and very independent.

“Most people didn’t know she was sick,” he said. “She kept it to herself. She worked till the end of her life. She was relentless about that: ‘I need to do my work.’ I have seen few people as dedicated to her work as Harriet Putterman. The only person I saw that was that dedicated to work was Frances Goldin.”

Councilmember Carlina Rivera put out a statement, saying she would “always be thankful for the valuable personal and professional counsel” that Putterman provide to her.

My district and all of New York City are better because of the life and work of my friend and activist Harriet Putterman. I and so many others in the movement will miss her dearly. pic.twitter.com/1TgeH8koJJ

“Harriet came out of retirement to work for Cooper Square Committee about eight years ago, and she joined our organizing department as a part-time staff person,” he said. “She was involved with our work on the Stand for Tenant Safety campaign and the Lead Dust Free NYC campaign. Both campaigns resulted in significant legislation being passed in the City Council to strengthen protections for tenants citywide.

“As a tenant of Steve Croman, she was involved in supporting the work of the Croman Coalition that led to the New York State attorney general bringing a civil and criminal case against him,” Herrick said. “It resulted in an $8 million settlement [for Croman tenants] and a plea deal for a one-year prison sentence.

“She brought a lot of institutional memory, dating back to the 1970s, to our work, and was a great mentor to our younger organizers,” Herrick said. “She was funny, generous with her time, a sharp policy analyst and a good friend. She will be deeply missed.”

Erik Bottcher, former chief of staff to Council Speaker Corey Johnson and now a candidate to succeed Johnson, shared a video clip on Twitter of bumping into Putterman while she was out campaigning with Joyce Ravitz for Carlina Rivera’s election.

Incredibly saddened by the passing of Harriet Putterman, a lifelong advocate for tenants, the underserved, & the working class. When she called, you knew it was something that would help a lot of people. This is how I remember her (she’s the one saying “don’t get run over, Erik”) pic.twitter.com/nd0llaV8xB

Brandon Kielbasa, the director of organizing and policy at the Cooper Square Committee, said Putterman’s commitment to housing justice issues was “phenomenal” and that she was passionate about community organizing.

“I feel so incredibly lucky to have had Harriet in my life as a coworker, collaborator and very dear friend for over eight years,” he said. “At the Cooper Square Committee, we mostly worked on Stand for Tenant Safety (STS) — a favorite campaign of hers — and leadership development work within the organization.

“She also played a critical role in working with a number of tenants associations in Steve Croman buildings, amongst others.

“Harriet had so many strengths it’s hard to list them all,” Kielbasa said. “She had a great eye for policy, deep knowledge of organizing, surefooted emotional intelligence, a completely unpretentious style of teaching, and her knack for bringing joy to the work — often through an amazing sense of humor and sharp wit — was just always present.

“Her overall commitment to the housing movement, and other movements for social change, is phenomenal,” he said. “Although she worked very hard, she had a sense of ease about her while she did. Community organizing was something Harriet was an absolute expert in and she loved it deeply. Organizing was truly a passion of hers. I am so grateful for all the time we were able to spend together.”

In 2013, Putterman retired from being the membership coordinator at the National Association of Social Workers (NASW) after 17 years.

Robert Schachter, the executive director of NASW, said Putterman deserved respect and earned it — even from landlord Croman.

“I always introduced people to Harriet as her being the best community organizer in social work in NYC, and there was a great deal of truth to this,” Schachter said.

“Harriet lived in a fifth-floor walk-up apartment on E. 18th St.,” he recalled. “At one point, a notorious landlord, labeled one of the 10 worst, bought the building and started to use unscrupulous methods to get tenants out. What he did not know was that a very seasoned tenant organizer lived in his building, but he found out when the Daily News did a story on his tactics.

“Eventually, once he came to know Harriet, he would call her to inform her of his plans, so that she would understand what he was doing and get her input. He eventually gave Harriet a second-floor apartment when it had become difficult for her to go up and down five flights.”

In 2016, Putterman was named a Lower East Side Community Hero by FAB (Fourth Arts Block).

Harriet Putterman had many interests, including  portrait painting — she took weekly painting classes — and going to the theater. She owned several Labrador retrievers over the years that she loved dearly. She enjoyed classic movies from the 1930s and ’40s.

She had a quick wit and loved to laugh, so it’s not surprising that she had a wide circle of friends, many of them activists in the housing justice movement. In addition to Goldin, other good friends included Karen Smith, Tito Delgado and Joyce Ravitz.

Putterman once traveled to Cuba as part of a delegation of activists in the 1970s that met with government officials, including Fidel Castro. She would recall with a laugh about how he flirted with her and had asked his aides who she was.

Harriet Putterman would have spoken at Frances Goldin’s memorial on May 15. Instead, now something will be said about Putterman at the event.

“We’re going to say something about her at my mother’s memorial. We can’t not,” said Sally Goldin. “She and my mother were cut from the same cloth.”

Putterman was predeceased by a half-sister, Renee, who was eight years older, on her mother’s side. She also had three much older half-brothers and half-sisters on her father’s side, Anne Putterman Cohen, Max Putterman and Sylvia Putterman Dzitzer, all who predeceased her. She is survived by several nieces and nephews, and their children and grandchildren.

In lieu of flowers, it’s asked that donations be made to the Cooper Square Committee.