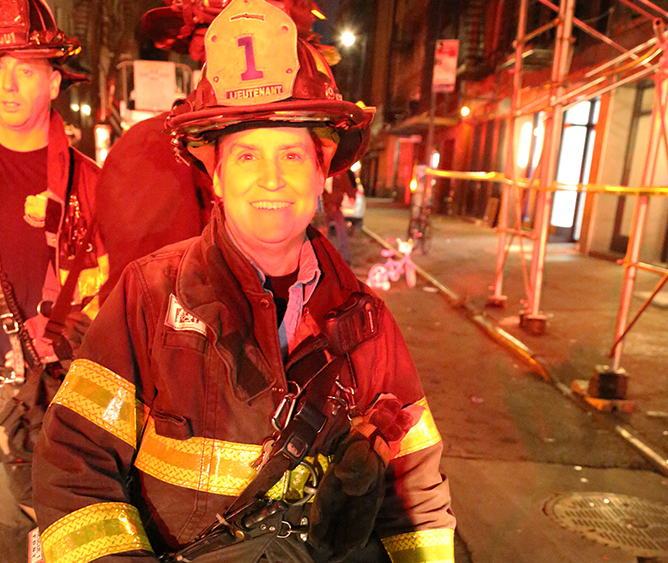 BY CLAYTON PATTERSON | Since I come from the working class, it is a group I easily identify with, and so, it is one of the themes of my documentary work.

One example of heroic would be the elderly, mostly female Chinese bottle collectors. There is something honorable in the dedication, the hard work, the determination, the concentration, overcoming difficult obstacles, all kinds of weather and negative people.

Another long-term collection of mine is the Fire Department. There is the unity of their work together, like the collective efforts of restacking the hoses, and the exhaustion after fighting a fire.  The cooling off with water. Of course, saving lives and fighting fires.

But I have taken and continue to take lots of everyday, typical workday photos.

And there are the special moments — those one-time moments in time. The special may be something as simple as just a unique moment in time. And that is what this firefighter photo represents.

There was a full-on emergency call on Ludlow St. The emergency turned into a winding-down of a less-serious electrical issue.

I noticed this one firefighter was holding court and the decision had been made for some of them to move out. I saw this was a woman.  I had to take this photo. I walked across the street and then walked along with her, and I said, “Can I take your photo?”

She looked at me, then said, “Clayton.”

Hmm, she knows my name.

And that was it. A magic moment.

Of course, the light was what it was, and the shot is what it is. But there is a magic to taking some photos. Who knows what it is? For me, this was one of those moments. That was it. A moment.

Turns out that the firefighter likes to fight more than fires. Turns out she likes to smash glass ceilings, as well.

According to an entry on the joinfdny.com page, Lieutenant Adrienne Walsh, a 20-year New York Fire Department veteran, in May 2018, became the first woman assigned to a rescue company.

Rescue company members have specialized training, with a focus on freeing civilians and firefighters trapped in fires, as well as performing “odd jobs.” They are often veteran members of the department.

Walsh’s company, Rescue 1, was one of the first units to enter the North Tower of the World Trade Center on 9/11 and lost half its company that day.

In her statement on being assigned to Rescue 1, Walsh said, “The key to this job, and to life, is to always work hard. Hold fast to your dreams, and remember that you can’t get anywhere alone. I’ve received a tremendous amount of support and I’m looking forward to this new assignment. I’m very grateful to have been given this opportunity and I will continue to do everything I can for this Department and the people of New York City.”

Previously, Walsh was the second woman in F.D.N.Y. history to be assigned to a highly trained Special Operations Command — Squad 18, on W. 10th St. — and the first woman to be promoted to lieutenant within the command in 2005. There are currently under 100 female firefighters in the N.Y.F.D.