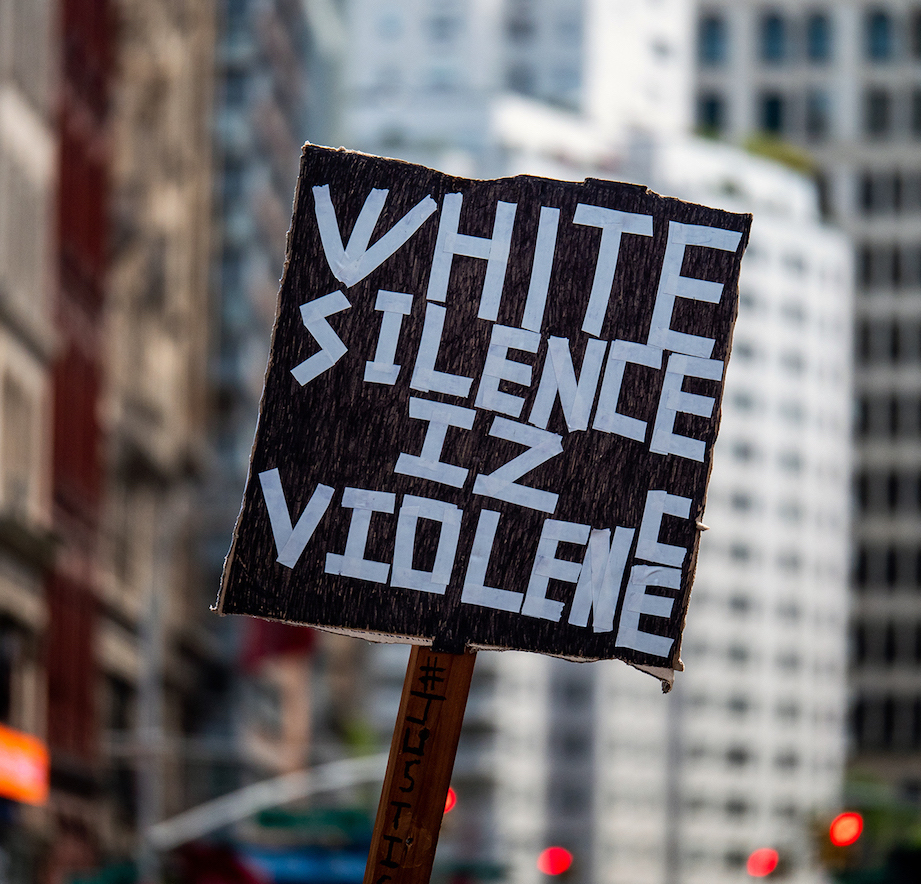 A sign at a protest in Union Square last month over the killing of George Floyd. (Photo by Milo Hess)

Handcuff. Etymology: you might think it derives from the same root as the teacher’s feared cuff, administered to the wayward schoolboy’s ear, that tuned his skull to the notes of a bell for an hour when he was twelve, or did it come from the cuff of a shirt, the finished end of a sleeve, that seems right. But no, it comes from the old English word cop, meaning fetter, a restraint. Synonyms: manacles, shackles, swivels, gyres — they turn but do not widen. We have Aristaeus, Apollo’s son, who was also the cause of Eurydice’s death, to thank for their first use, when he sneaked up on sleeping Proteus and slapped them on the shape-shifter, from whom he wanted apiary intelligence, by whatever means, and got it. The Industrial Revolution brought improvements in eighteen sixty-two and nineteen twelve, first the ratchet, then the swivel, then the swing cuff. Many stores in New York City sell them, including Party City, as they are often used in commercially negotiated domination sessions.

I knew none of that as Officer Vincent DiAdamo wrenched my arm behind me, threw me to the ground and tried furiously to smash my face into the pavement as he was calling for backup — “Officer in distress” — and two cruisers sirened from opposite directions and braked hard as cops leapt out, guns drawn, and I thought the next sound I heard might be a shot. One cuff snapped shut, then the second. Even at that adrenal moment, cuffed in all three meanings of the word, all I could think was, if I were black or brown I’d likely be dead.

Later, as I sat in the precinct holding cell, watching the cop fill out paperwork, as the angry purple blood drained from his face, Officer Vincent DiAdamo relaxed and explained to me, “Out in those streets ya gotta go a little berserk.” Then last week another Vincent DiAdamo threw another handcuffed man down and put a knee on his neck. Only that man was black, and after eight minutes and forty seconds of Officer Derek Chauvin’s full weight constricting his airway, suffocating, calling for his mother, choking out “I can’t breathe” just like Eric Garner, he was dead.

RACISM AND MY WHITE PRIVILEGE

“The only reason for racism’s persistence is that white people continue to benefit from it.” And “Until white people call out white people, there will always be safe places for racial ugliness to brew and fester.”

Those two statements are by Bryan N. Massingale, a Catholic priest and a Fordham University professor. He is absolutely right. This is personal; the first white person I need to call out is — me. Until I do that, I have no right to speak of racism at all. So it’s time for me to list the benefits, general and specific, that I have received simply by being born with less melanin than my friend Anthony.

Those are the general ways I have benefited from the lightness of my skin. Now for some specific instances — or at least the ones I remember, since I am sure there have been plenty more I was never even aware of.

So: I benefit every single day from the fact that I am “white” and male. Even in my radical political activities, I am taking far less risk than black, brown and Native comrades.

What this all adds up to is institutionalized white privilege. When we — “white” people — become aware of these advantages, the next step is crucial. If we accept our privilege without thinking about it, the racism gets baked in, whether we’re aware of it or not. Even if we do no racist actions, and speak no racist words. If, on the other hand, we not only accept it unconsciously but benefit from it, still unconsciously, for example, by buying a house in a redlined neighborhood where blacks are being forced out, that is white supremacy, whether we like it or not. (There’s a reason the process of becoming ethically aware is called “conscience-building,” concientización, among Latin American progressives.) If I support the racial inequities and think that is the right way for things to be, that goes beyond mere passive or unconscious racism; it is no different from Hitler’s “final” solution.

In the mid-Sixties, when I was first, stumblingly, becoming aware of such things, I was worried — “I don’t want to be a racist but maybe I am one, I have these thoughts… .” An African American friend back then very kindly told me, “Chris, since you have grown up in the U.S., what would be surprising is if you were not a racist.” That was perhaps the single most liberating thing anyone ever said to me. Yes, I am a racist because I have benefited so much and so consistently from our racist social structures. Whatever I can do to redress this inequality is a drop in a very large bucket — only if we privileged white folks put all our drops in, can we begin to change, to deal with our racism. Only if we begin to listen to our sisters and brothers, really listen to them, can we — together and following their lead — open our society to true democracy.

Brandt is a writer and political activist, also a translator, carpenter, furniture designer and theater worker. He teaches poetry and Peace and Justice at Fordham University. His poems and essays have been published in Spain, France and Mexico, as well as the U.S. He lives in the East Village.