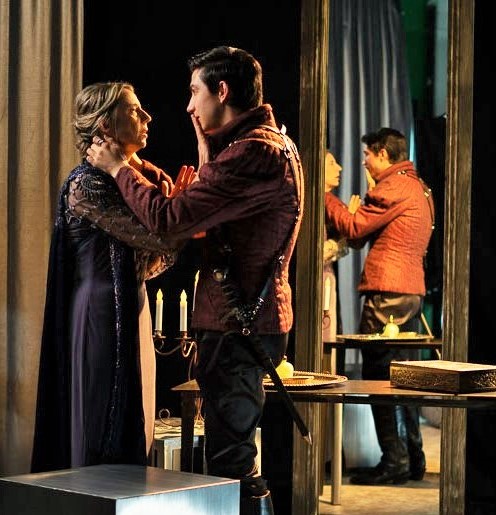 Anna Maria Cianciulli as Gertrude and Andrew Burdette as Hamlet in "Hamlet/Horatio."

BY STEPHEN DiLAURO | Shakespeare in the Park and the New York Shakespeare Festival, among others, have taught us that the Bard’s work is malleable and can survive interpretation and modernization.

“Hamlet/Horatio,” Sundance-winning director Paul Warner’s latest effort, transposes the longest of Shakespeare’s plays into a delightful movie that provides a new take on this classic fare. The story of the Danish prince is told in retrospect from the somewhat surrealistic viewpoint of his best friend, Horatio, who is making a movie within the movie.

As a playwright, I have made it my mission to see as many good productions of the Bard’s 37 plays as possible without it becoming a chore. I never bought the notion that plays or movies should be seen because they are “good for you.” First and foremost, plays and movies should be entertaining to succeed artistically.

As to “Hamlet,” at three and a half hours — great story but it is too long for any but the greatest actors to carry. Movie stars love to put “Hamlet” onto the big screen. There have been seven film “Hamlet”s since the 1940s. Most of them were foreshortened versions of the play, Kenneth Branagh’s production being the exception.

Shakespeare’s longest play was originally about the king of Denmark’s son. In it, Hamlet is told by his father’s ghost to avenge his death and kill the new king, Hamlet’s uncle. In the original play, Horatio is Hamlet’s trusted, closest friend. Instead of telling the “Hamlet” story through its main character’s eyes, “Hamlet/Horatio” flips the notion on its head and tells the story through Horatio’s perspective.

“Hamlet/Horatio” is a lovely movie that began 20 years ago as a passion project for writer David Vando, who lives in Lower Manhattan, and producer David Wenzel (who gives a performance that crackles with energy, as Lucianus in the play within the play within the movie). Previously, Tom Stoppard retold the story of “Hamlet” through the eyes of two minor characters in “Rosencrantz and Guildenstern Are Dead.” The existence and tone of that effort were a likely influence when Vando began writing “Hamlet/Horatio.”

There are a number of fine performances in this movie. The most outstanding is by the Italian actress Anna Maria Cianciulli. She gives a fresh and nuanced interpretation of Gertrude, Hamlet’s mother. For one thing, she comes across as innocent when other performers and their directors have chosen to make her complicit in the murder of Hamlet’s father — her former husband.

This Gertrude is anything but vain and complicit. She is regal, and a caring mother. By movie’s end, she is another innocent victim of the corruption that swirls through the Danish court in the wake of power and greed.

“Anna Maria is exactly what we were looking for in that role,” producer David Wenzel told me. “She’s one of the best things in the production. She makes everyone around her wonderful.”

Full Disclosure: I’ve been following Anna Maria Cianciulli’s career for some time. She is a neighbor and friend. We met while walking our dogs in Washington Square Park. I also produced a short, poetic film — “33 Breaths” — which she created during lockdown.

In addition to her acting, she is widely considered one of the planet’s foremost teachers of the Meisner technique for actors. Sanford Meisner himself asked her to oversee the Italian translation of his seminal book “On Acting.” She is currently a professor in the master’s program of the film department at Columbia University and she teaches at New York Film Academy.

Cianciulli gave a hilarious performance as an addicted gambler and mother of the of the male lead in the 2015 movie “Stealing Chanel.” Her range is impressive. In 2017, a short film she wrote and produced was an official selection at the Cannes Film Festival Court Métrage.

Her theater chops are also quite exceptional. For five years Cianciulli was the artistic director of Bottega dell’ Arte (a.k.a. BdA the Arts) in the Theater District.

As a theater director, actor, and producer she has worked with Kevin Bacon, the late Tony- and Golden Globe-winner Brian Dennehy, the Academy Award-winner Roberto Benigni and the Golden Globe- and Emmy-nominated Tony Danza. She co-produced with BAM. Cianciulli’s work was seen at The Kitchen, Vanderbilt Hall of Grand Central Station, Joyce Soho, St. Peter’s Church, the American Museum of Natural History and The Players Club.

David Vando, the writer of “Hamlet/Horatio,” gives two performances that enhance the surrealistic flavor of the movie. He is the (only) grave digger. He is also a haunting and macabre figure as the cinematographer of the movie within the movie.

Themo Melikidze does a superb job as Horatio, both in the story and while overseeing the cinematic capture of Hamlet’s tragedy as he remembers it.

Andrew Burdette gives the Prince of Denmark’s madness a wide-eyed youthfulness that grows in expression and depth through to the end.

Joe Menino as Polonius and Michael Elian as Claudius both deliver the goods in this retelling.

There is more sexual tension in “Hamlet/Horatio” than in any “Hamlet” that I’ve seen. In large part this is attributable to the suggestions of incest between Ophelia (Phage Nolte) and her brother Laertes (Wayne Stephens). Both sizzle in their roles.

Director Paul Warner’s deft touch is unmistakable in the overall tenor and structure of the film, yet it never intrudes.

“Hamlet/Horatio” has won a host of awards for Best Director, Best Picture, Best Cinematography (Hernan Toro), Screenplay, Music (Daniel Kelley and David Pine), Production Design (Sorangel Fersobe) and Costume Design (David Winthrow) from prominent film festivals that were forced into online presentations over the past year and a half.

The cohesive whole Paul Warner created is a delight to watch. It is currently streaming on YouTube, Prime, Apple TV and Google Play.

In the end, “Hamlet/Horatio” is about love overcoming death, a theme the Bard revisited on occasion. It is also about the corrosion and evil that result from corrupt politics. That is something that resonates from both the distant and recent past.

DiLauro is a playwright and musician.