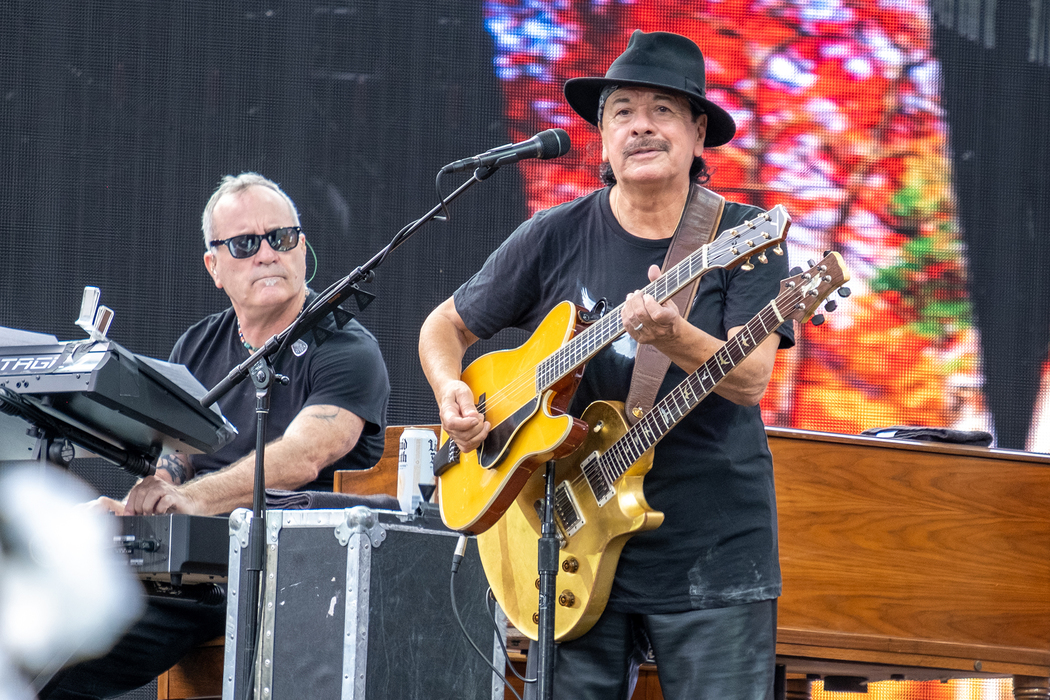 BY THE VILLAGE SUN | The “We Love NYC: A Homecoming Concert” in Central Park on Saturday was a lot of fun while it lasted.

Everyone in the vaccinated audience was hoping the full, scheduled five-hour show, from 5 p.m. to 10 p.m., would be able to go on. But about halfway through, raindrops started falling, courtesy of Hurricane Henri, lightly at first.

An announcement came on telling everyone that “due to approaching severe weather all persons should…proceed to your vehicles and protected areas outside of the festival site.”

Given that the concert was in Manhattan and that many people probably walked, took mass transit or rode Citi Bikes to get to the Great Lawn, the directive to “proceed to your vehicles” seemed a little odd. Maybe whoever wrote the announcement was a suburban “car person”?

Anyway, things soon progressed to a torrential downpour, even setting a one-hour record for rainfall in New York City — nearly 2 inches, from 10 p.m. to 11 p.m.

As for the music, it was diverse and great. Backed by the New York Philharmonic, Italian tenor Andrea Bocelli belted out a powerful rendition of “’O Sole Mio,” which he noted was Italy’s favorite song.

The blind singer himself had battled COVID.

“We crossed a great storm this year,” he said.

Following along on an operatic note, Jennifer Hudson sang “Nessun Dorma.” In the new biopic “Respect,” Hudson plays Aretha Franklin, who sang the Pucini aria at the ’98 Grammys.

Legendary guitarist Carlos Santana and his band then blew the crowd’s socks off as the pumping bass and bongos were turned up to 11 on “Maria, Maria,” followed by “Smooth” with vocals by Rob Thomas.

Jon Batiste, the band leader for “The Late Show With Stephen Colbert,” was the hardest-working performer on the Great Lawn. He busted out some sinuous dance moves, dropping to his knees and scooting along the stage. He also was very spiritual in his remarks to the crowd, saying that we all only live once, so now was the time to “get free” and dance.

New York City is the birthplace of rap and hip hop. So, fittingly, there was a gathering of some of the genres’ all-time all-stars. Among them were LL Cool J, Rev. Run of Run-DMC, Grandmaster Melle Mel and Scorpio, Busta Rhymes, Fat Joe, French Montana and Remy Ma. They did a medley, spanning from 1982’s groundbreaking “The Message,” to J’s early smash hit “Mama Said Knock You Out” to Fat Joe and Remy Ma’s “Lean Back.”

After being greeted by a round of boos, Mayor de Blasio did a nice job intro’ing Earth Wind & Fire — maybe he has a future as a radio deejay after City Hall. He and his wife, Chirlane McCray, noted they had played one of the iconic funk/pop band’s hits at their wedding.

But the plug was pulled when New York-born crooner Barry Manilow was halfway through his set, having launched into “Copacabana.” Luckily, ponchos had been distributed to concertgoers as they arrived at the Great Lawn.

One thing that had not been available, though, was beer. Only the V.I.P. section could buy alcohol. Others could purchase a beverage called Liquid Death, which is sold in seeming beer cans but is actually “mountain water” from the Alps.

The event’s emcees were TV news figures Gayle King and Don Lemon. Senate Majority Leader Chuck Schumer gave remarks. So did Colbert. The New York Post blasted Schumer for having the audacity, during the Afghanistan crisis, to do some dance moves with Colbert backstage. Uber-producer Clive Davis, who organized the concert, also spoke.

Some of the biggest acts on the bill, including Bruce Springsteen, Paul Simon, Patti Smith, Elvis Costello, The Killers and Colombian reggaeton star Maluma, never got a chance to perform.

It would be great if the city had them perform at a rain-delayed “Homecoming Concert: Part II.”