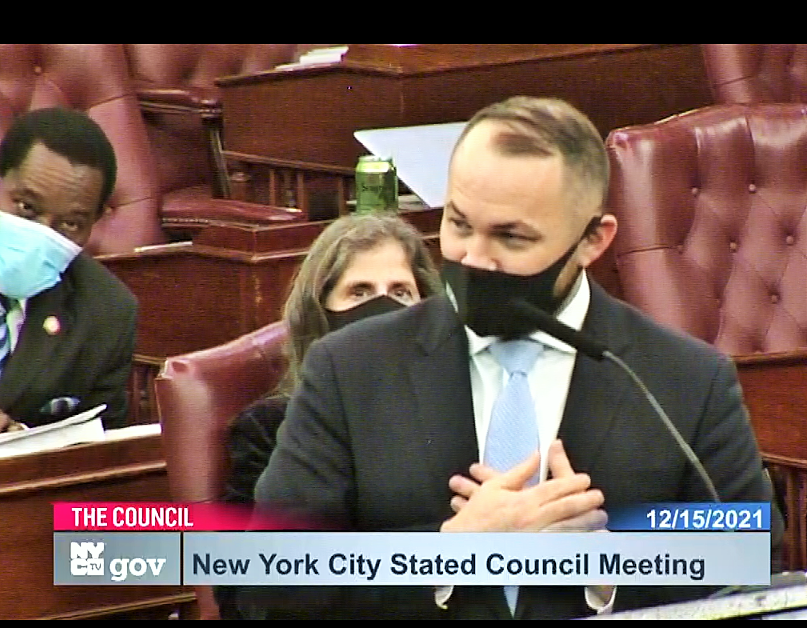 Corey Johnson giving his parting remarks at the end of the City Council's stated meeting on Dec. 15.

BY LINCOLN ANDERSON | Updated Dec. 23, 4:45 p.m.: Corey Johnson ended his tenure in the City Council by recapping how it all began — that is, his arrival in New York as a teenager and his improbable rise to power and influence.

Johnson, 39, the City Council’s speaker for the last four years, spoke at the end of the legislative body’s stated meeting on Dec. 15. Due to term limits, about two-thirds of its members, including Johnson, will be leaving City Hall at the end of this month.

All the members — from the term-limited to those staying on — had a chance to say a few words before announcing their votes on the agenda items, such as the contentious Soho/Noho upzoning, which, to the deep chagrin of local residents, passed overwhelmingly.

There were many heartfelt speeches as councilmembers talked of the pride and satisfaction they took in their accomplishments and in doing the city’s work.

In his own remarks, Johnson reached farther back, to his time before entering politics, to his roots as an L.G.B.T.Q. activist trailblazer growing up in a small town in Massachusetts.

He noted that he had been “extremely suicidal” as a teenager, but then made the decision to come out.

“I was the only gay student at a school of 1,300,” he recalled. “I had just been elected the captain of the football team.”

Johnson’s coming-out story landed him on the front page of The New York Times and instantly made him a national figure.

After graduating high school, Johnson came to New York City in 2001 with just a duffel bag. Two years later he found out he was H.I.V. positive.

The early going in Gotham was a struggle.

“I was paying $400 to live in someone’s kitchen in Chelsea,” he said. “There were months that I couldn’t pay for my medicine that first year.”

He recalled having to push over the refrigerator each night just so he could pull out his futon to go to sleep.

Johnson pointed to himself and other city councilmembers as examples of people who pulled themselves up by their bootstraps to achieve prominence.

“So if you are a small Black girl in New York City, look at the New York City councilmembers,” he said. The Council is poised to have a female majority for the first time in its history.

He encouraged immigrant kids to “dream big” and “look at the stories” of Margaret Chin, Peter Koo and others. After three terms in office, Chin — a main sponsor of the Soho/Noho rezoning — is term-limited, as well.

“If you are a young gay person who is struggling with who you are, dream big,” Johnson said, adding that Tom Duane “made it possible” for him to envision a path in politics.

Johnson defied the odds by becoming the chairperson of Community Board 4 over another candidate being pushed by then-Council Speaker Christine Quinn. He then ran for City Council District 3 (Greenwich Village/Chelsea/Hell’s Kitchen) and, vowing to “work harder” than his campaign opponents, won the election. At the start of his second term in office, he was elected Council speaker.

More recently, Johnson ran for mayor but dropped out of the race last September. He then made a bid for comptroller, finishing second to Brad Lander in the Democratic primary this past June.

Fighting for tenants’ rights, Johnson was arrested in Albany in 2015 for doing civil disobedience outside state Senate Republicans’ offices while demanding the extension of rent regulation.

He backed the 14th Street busway, delighting transit advocates but disappointing a vocal group of Greenwich Village and Chelsea residents who, among other things, feared it would shunt car traffic to neighboring side streets, and who sued to stop the plan. The same residents also protested associated new crosstown bike lanes on 12th and 13th Streets.

Also on transportation, Johnson unapologetically said the city needed to “break car culture” by reducing the number of cars entering Manhattan. He pushed for the Fair Fares program, under which low-income residents can get half-price MetroCards. Johnson and the Council also produced a Streets Master Plan designed to “revolutionize” the city’s streetscape. Transportation Alternatives honored him as its first Vision Zero Leader of the Year in 2018.

However, small business advocates slammed Johnson for not doing more to address the crisis of mom-and-pop shops. Pre-pandemic, many blamed the blight of empty storefronts around Downtown on the explosion of e-commerce and landlords demanding sky-high rents. But advocates say measures like the Small Business Jobs Survival Act could help. Johnson felt the bill needed some refining — so that, for example, mom-and-pops, but not malls, would receive eviction protections. He never allowed the S.B.J.S.A. to be voted on by the full City Council.

He also earned the enduring ire of Chinatown residents for backing Mayor de Blasio’s plan for a new, 400-foot-tall, borough-based jail — a.k.a. the “megajail” — to be located by the courts as part of the effort to close Rikers Island.

The budget process in June 2020 was one of the most challenging and stressful moments of Johnson’s tenure as speaker. Following the murder of George Floyd by officers in Minnesota, the City Council here was under intense pressure to “defund the police.” Turning up the heat, activists camped out at Occupy City Hall awaiting the vote while festooning the plaza with a riot of graffiti. Ultimately, $1 billion was slashed from the department, but hardliners were not satisfied.

Again, under his leadership, the Council approved the Soho/Noho upzoning, which was opposed by Community Board 2 and most of the area’s residents, as well as the upzoning for the Howard Hughes Corporation’s high-rise project at 250 Water St., which is also facing determined community opposition.

Several years ago, a seeming plan for affordable housing that Johnson touted at the St. John’s Terminal site in Hudson Square mostly fell through, with half of the project now being developed as an office building exclusively for Google. In earlier years, though, he was a tough critic of New York University’s development plans for its two South Village superblocks.

Johnson was also public about his own life, in terms of being in recovery and therapy.

“I’m not feeling emotional. I’m feeling grateful for the opportunity I had these eight years,” Johnson said last week.

His mother, he noted, has been his “rock” through everything, from his coming out to his career.

He said he and the councilmembers “will be friends for life.”

“This has been the greatest professional privilege of my life and I will never forget it,” he said, adding, with a smile, “I’m hopping on a flight to South America tonight. I’m walking away a grateful, sober, full-hearted, happy man.”

Meanwhile, the next City Council speaker will be Adrienne Adams from southeastern Queens. Incoming mayor Eric Adams had pushed for Francisco Moya, also from Queens, but Moya did not have enough votes of his fellow members. Councilmember Carlina Rivera was also among those seeking the speakership, but she eventually threw her support behind Adrienne Adams. Justin Brannan and Gale Brewer also had been considered in the running for speaker.