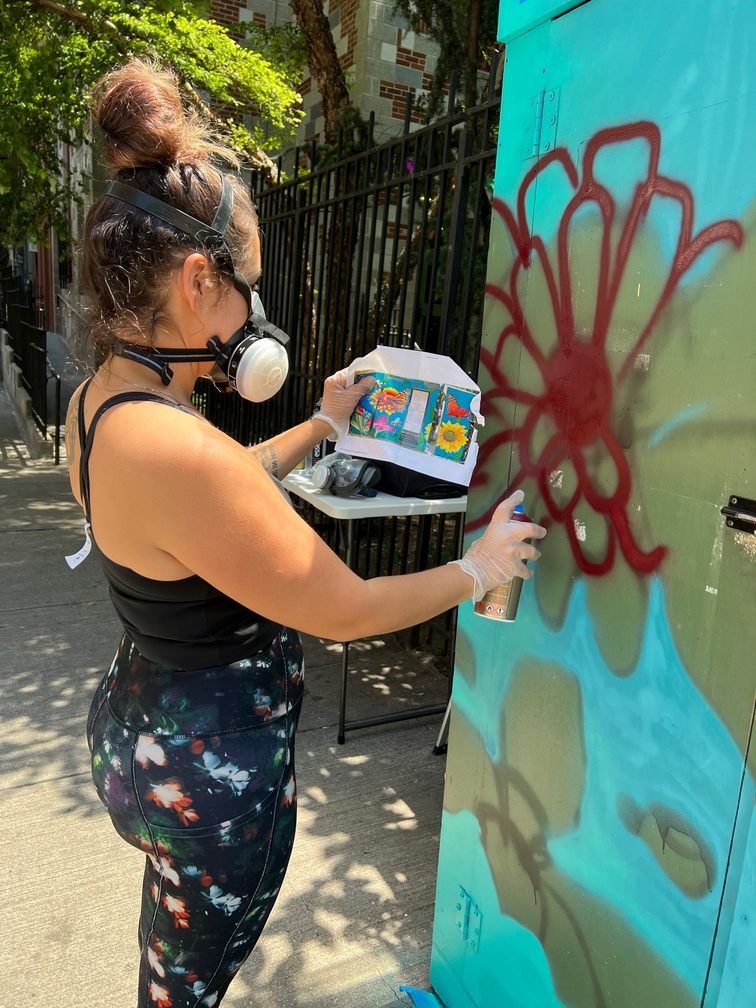 BY BONNIE ROSENSTOCK | June 15 marked the first anniversary of the Loisaida CommUnity Fridge and Food Pantry on Ninth Street and the corner of Avenue B.

It was a fitting occasion to present a belated gift (by 10 days) to the neighborhood — a brightly colored spray-painted mural on the two units that reflects the spirit of the Lower East Side.

The mural was designed by Danielle Mastrion (@daniellebk@nyc), the overwhelming winner out of the three artist submissions, voted on by the fridge volunteers.

“When I saw the call for entries on Instagram, I e-mailed and messaged them and submitted my portfolio,” Mastrion said. “I did a big mural last year at the Loisaida Center [710 E. Ninth St., between Avenues B and C)] in the courtyard and sent that work. I hoped they would be familiar with that and other projects I’ve done on the Lower East Side.

“I said I wanted it to be a continuation of that mural, to connect the community center, the CommUnity Fridge, the soup kitchen maintained by Trinity Lower East Side Lutheran Parish [the fridge’s sponsor], which also has a small garden in its courtyard, all the community efforts.”

The mural, as Mastrion explained, depicts “herbs you can grow in the gardens, monarch butterflies and bees — really important to show the pollinators — sunflowers, blue jays, sage, which is good for energy. I wanted to show all the life you find and pay respect to the food, the earth, the herbs and the Lower East Side, which is so filled with community gardens.”

Mastrion, 39, who was born, raised and still lives in Sheepshead Bay, Brooklyn, also wanted to pay homage to her mother, who grew up in a tenement on Eighth Street between Avenues B and C and moved to Brooklyn as a teenager.

“There are two community gardens on that block now,” Mastrion noted. “At the time, Tompkins Square Park was very important to her.”

Her father’s Italian-American roots go back to Brooklyn for several generations.

Her mother was born in Belgium. After World War II, in the 1950s, she and her family — refugees and displaced persons originally from Eastern Europe — emigrated to America.

“One of the churches on the Lower East Side sponsored them and brought them over,” Mastrion said. “That’s another reason I like coming back here.”

In addition to the new mural, to mark its one-year anniversary, the fridge will be feted in the adjacent Trinity Lutheran Lutheran Lower East Side Parish courtyard by volunteers and local leaders on Wed., June 29, from 6 p.m. to 7:30 p.m.