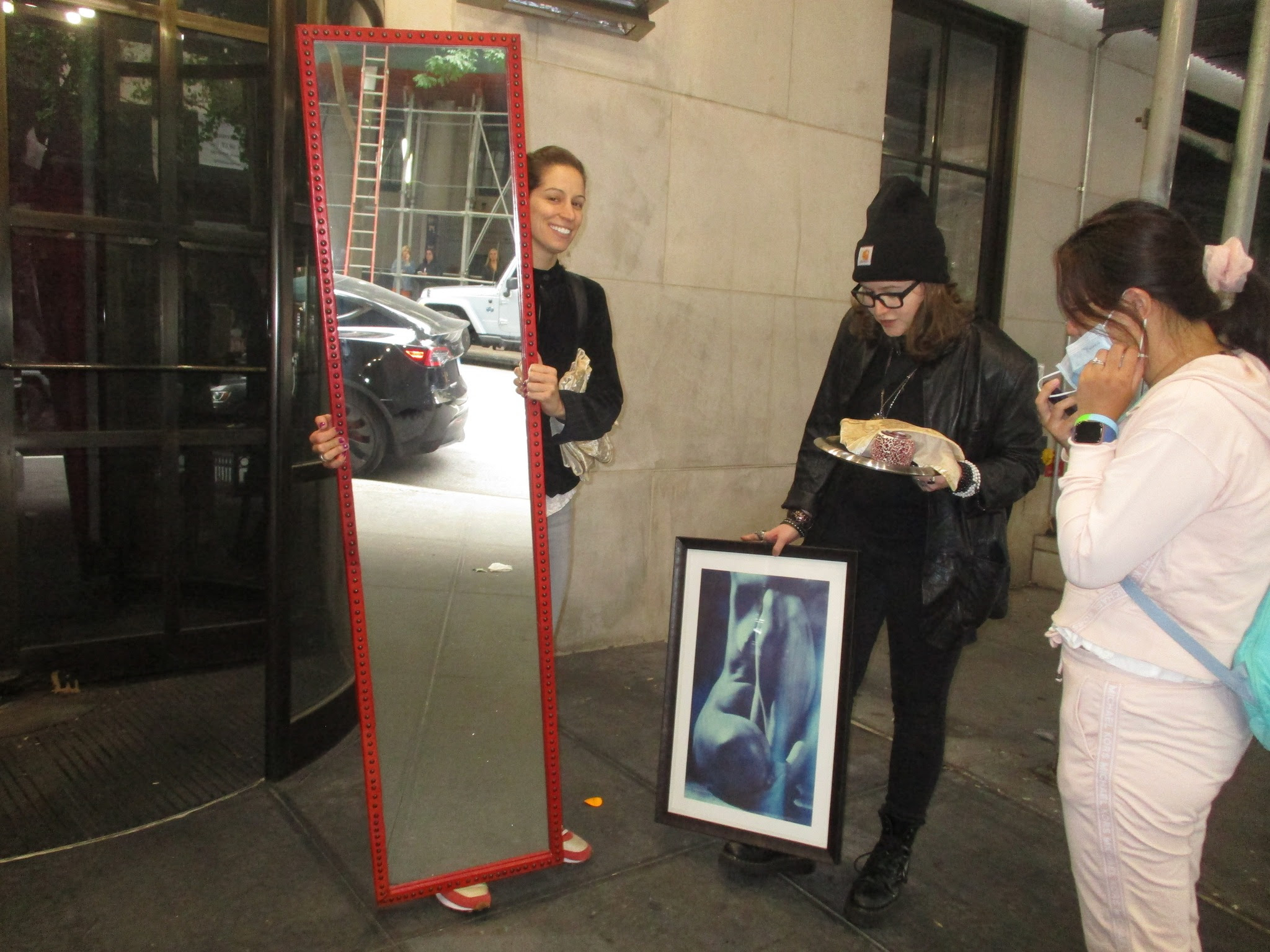 The woman on the left bought a mirror for $300. The other customer paid more for a painting. (Photo by Mary Reinholz)

BY MARY REINHOLZ | For the better part of a week, New York trophy hunters estimated at 1,000 a day lined up outside the nearly empty Gramercy Park Hotel looking to buy its furniture, kitchenware, artwork, rugs, desks, books and other down-home contents, including bathrobes and king-size mattresses. These were all up for grabs on the ground floor of the 17- story edifice at 2 Lexington Ave. starting around Sept. 24.

The mob scene died down by Wednesday of this week, but early on in GPH’s liquidation sale, lines wrapped around two blocks. Some of the memorabilia seekers reportedly wept knowing that this haute bohemian icon, built in 1925 and offering hospitality to a young John F. Kennedy followed by the likes of Debby Harry, The Clash and gonzo journalist Hunter S. Thompson, was not going to reopen again. They wanted remnants from its better days, before the COVID pandemic hit and shut the place down in March 2020, also shuttering Danny Meyer’s pricey Italian restaurant Maialino, and the nightclub Rose bar, a popular entertainment venue.

Peter Benigno, one of the principals in Best Buys Auctioneers that is managing the GPH liquidation sale, said he noticed people in tears waiting to buy mementos from the hotel — among them “former employees, former guests who had come here on their honeymoons or to get married. They had an emotional attachment to the hotel,” he added, noting many waited hours to buy “a piece of history.” He acknowledged a report that one woman spent a total of $33,000 over separate visits.

Not every customer was in mourning. A beaming brunette, holding her cell phone to get a ride outside Gramercy Park North on Sunday, was  ecstatic that she had just bought a no-frills industrial lamp for $500 after standing in line for two and a half hours to get into the hotel and “another hour and a half” to complete the transaction.

“It’s heavy,” she said of her purchase. “And it’s historic.”

Benigno answered questions from The Village Sun beneath an immense chandelier that one auctioneer appraised at $400,000 when it was new. Nearby was a sumptuous red velvet sofa with a fringed skirt. Neither were up for sale. It wasn’t clear whether they would be auctioned off after the liquidation sale ends, possibly by mid-October. Benigno said he could not comment on a forthcoming auction “because things are evolving minute by minute.”

He also wouldn’t divulge who hired his company to run the liquidation sale of products from 180 rooms “because of the legal problems” that have engulfed the hotel,  which Benigno said still has five guests. Currently, real estate tycoon Aby Rosen of RFK Realty is the owner of the building, which he purchased in 2003 with then-partner Ian Schrager. The two men tapped famed Brooklyn artist Julian Schnabel to redesign the interiors, turning GPH into a trendy hot spot.

Shraeger sold his share to Rosen in 2010. But the land beneath the hotel, which Rosen had leased for more than $5 million a year, is owned by Soleil Management,  representatives for the estate of developer Sol Goldman. That company evicted Rosen for nonpayment of rent during the pandemic and sued him last year for $79.5 million.

Soleil and RFK did not respond to requests for comment.

People are now wondering if the beloved building will become condos. Meanwhile, the liquidation sale is currently running from 11 a.m. to 6 p.m. until everything is gone. Call 877-500-1414 for additional information.