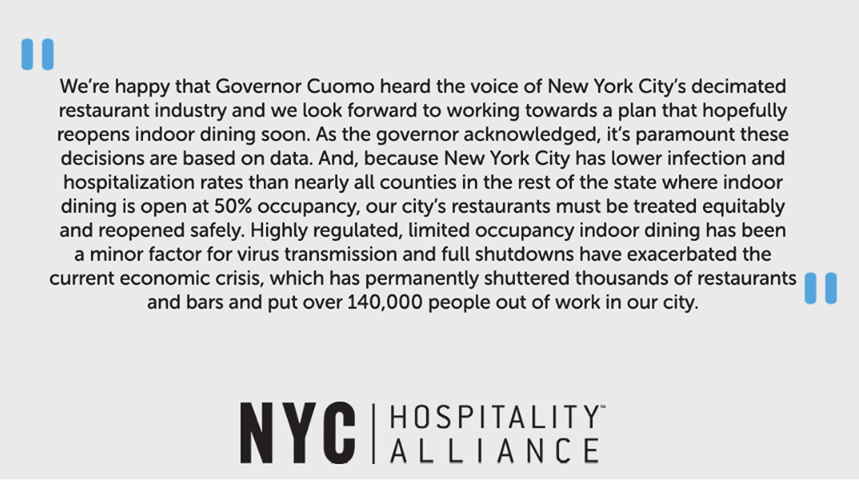 The NYC Hospitality Alliance issued this statement after Governor Cuomo's remarks on Wednesday.

BY EVERYNIGHT CHARLEY CRESPO | In a complete flip from 48 hours earlier, Governor Cuomo announced on Wednesday that he would release a plan for New York City restaurants by the end of the week.

Two days earlier he said that the easing of COVID restrictions, which he would announce on Friday, would not include a relaxation of the ban on indoor dining in New York City. However, the local hospitality industry is now anticipating that he may allow New York City restaurants to begin indoor dining again at 25 percent capacity. With Valentine’s Day coming, though, many restaurant owners are hoping for 50 percent capacity.

Cuomo will meet with Mayor de Blasio, health officials, restaurant leaders and other local stakeholders to fashion a strategy for city restaurants. He said that officials were calculating the level of safety in resuming quarter-capacity indoor dining. He declined to lift the 10 p.m. curfew for restaurants, however, concerned that a later mandatory closure hour could spark larger crowds.

“I fully understand how difficult it is that they’re closed, not just for the restaurants but all the people who are employed there,” Cuomo said. “On the flip side is how fast this virus can take off. But we’ll have a plan by the end of the week.”

Cuomo allowed 25 percent capacity indoor dining in New York City in early October, then suspended all indoor dining about six weeks later in mid-December. Anticipating a “holiday spike” in infections, which did happen, he targeted the city due to its population density and its history as the U.S. epicenter of COVID in the virus’s early days. Since then, city restaurants have been limited to outdoor dining, delivery and takeout service. All service must end at 10 p.m.

After affirming the firmness of the ban on Jan. 25, Cuomo received the widely reported support of the mayor the following day. At the same time, though, the governor was also hit with mounting opposition from the NYC Hospitality Alliance, the New York State Restaurants Association and other food-service businesses. Even news reporters at his press conferences challenged him. The hospitality industry is demonstrating appreciation for Cuomo’s reversal, but is asking for more concessions.

As for the mayor, on Tuesday he said he supported the governor’s decision to keep the ban on indoor dining in place for now.

“This all has to be about the data and the science,” de Blasio said. “Right now, there’s real concern about these new variants that we’re dealing with. Our healthcare leadership’s watching that real carefully, but the biggest ‘X’ factor is the vaccine. That could be the game changer, obviously, but we don’t have the supply.

“Right now, the central focus is health and safety,” de Blasio said. “Right now, now the data and the science tells us ‘be careful.'”

The mayor encouraged citizens to support their favorite restaurants despite the winter weather.

“I have done outdoor dining in this kind of temperature and not a problem at all for me,” he  said. “This is perfectly good weather and there’s a lot of great outdoor dining setups that have really kept people real warm and safe. They’ve done great. So I encourage everyone, have a winter adventure tonight.”

Meanwhile, restaurants are allowed to provide “incidental music” with live musicians for their customers. While many restaurants did this in the fall, the music mostly ended with the closure of indoor dining. The number of restaurants that continue to provide live music has dwindled drastically, and the increasingly hard weather may reduce those numbers further. Depending on what Cuomo reveals on Friday, restaurant owners may be open to rebooking live music again.