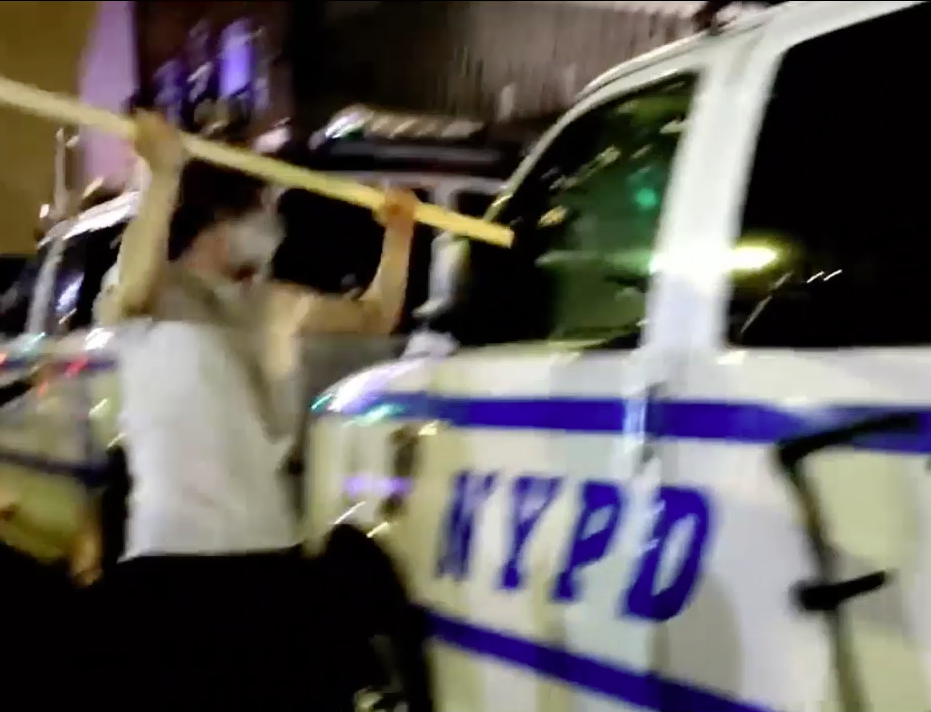 Police want to talk to this guy about breaking police van windows on the Lower East Side. (Courtesy N.Y.P.D.)

Right up there with racist statues as a top target right now are police vans.

A man vandalized three parked unoccupied police vans parked on the Lower East Side on Sat., July 25, around 10 p.m., according to police.

Cops provided video of the suspect in front of 107 Essex St. showing him pounding on a police van window with what appears to be the stick handle of a protest sign.

The suspect, who is wanted on a charge of a criminal mischief, is described as between age 20 and 30.

In fact, the incident was part of a larger night of anti-police protests in Lower Manhattan. Hundreds of marchers started out at Ludlow and Rivington Sts. on the Lower East Side and marched to One Police Plaza.

The New York Post reported that a total of six police vans were vandalized, trash cans were set ablaze and nearly 20 protesters were arrested at Confucius Plaza in Chinatown.

The night of violence was reportedly in solidarity with protests in Portland and Seattle.

Police ask that anyone with information on the Essex St. incident call the New York Police Department’s Crime Stoppers Hotline at 1-800-577-TIPS (8477) or for Spanish, 1-888-57-PISTA (74782). Tips can also be submitted on the Crime Stoppers Web site at WWW.NYPDCRIMESTOPPERS.COM and on Twitter at @NYPDTips.