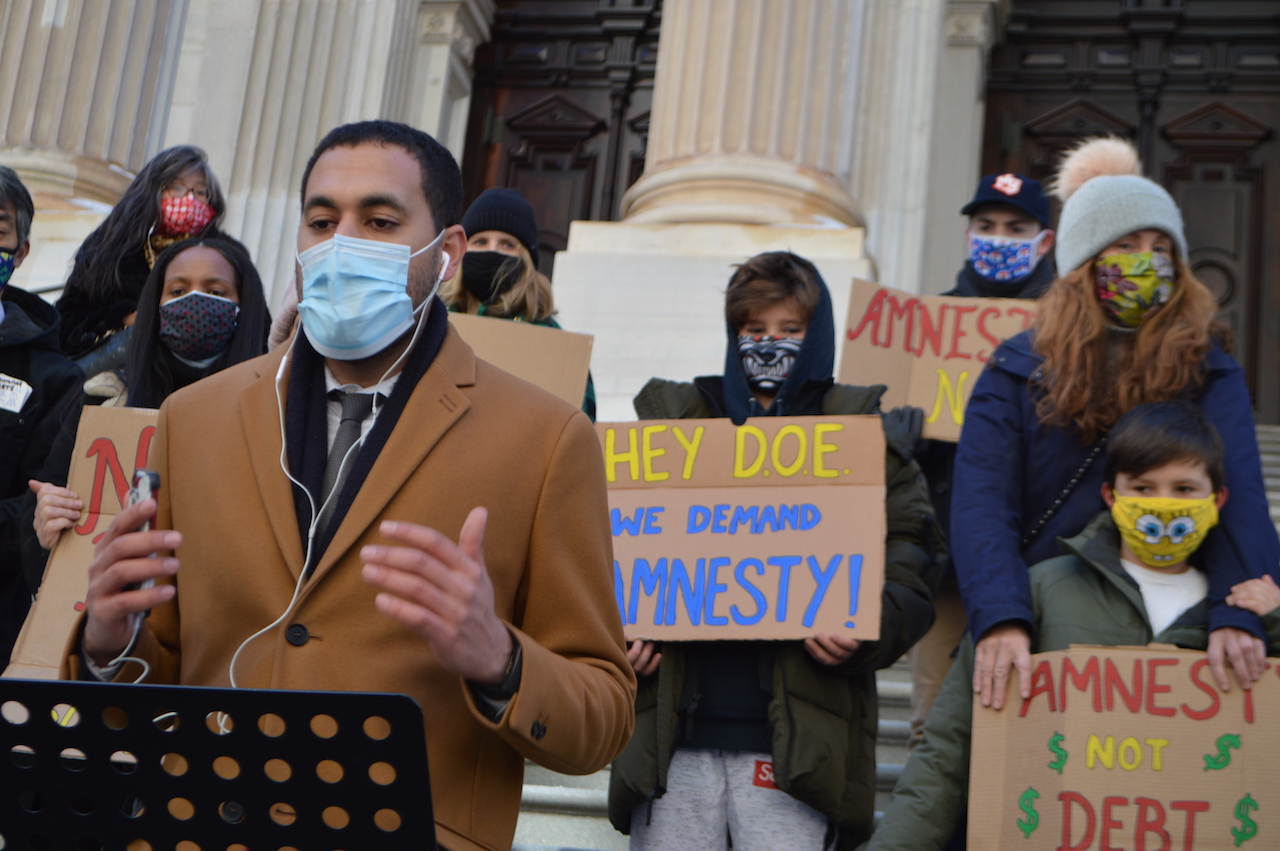 Christopher Marte speaking at the rally on the Tweed Courthouse steps. (Photo by Caitlin Kelmar)

BY THE VILLAGE SUN | With funding tied to student enrollment, schools are facing big deficits amid the pandemic when they should be getting more resources, advocates and political candidates said at a recent rally.

Parents, teachers and advocates were joined by City Council candidates Christopher Marte and (virtually) Erik Bottcher on the steps of Tweed Courthouse, on Chambers St., on Feb. 4 to demand “amnesty to avoid public school debt.”

Specifically, they called on the Department of Education to waive any “debt” that schools incur during this pandemic year.

Public schools face an annual midyear budget adjustment, early in the calendar year. The schools’ enrollment in October is compared to their current and projected enrollment — usually based on the summer — and funds are cut or added to the schools’ budgets, accordingly.

Unforeseen enrollment losses can cause a school to owe money to D.O.E.; basically, the school would have to return funding.

Last May, when schools were planning their budgets, principals had no way to predict what the state of the pandemic would be by the following September. Sixty percent of the city’s schools, including many schools in Community School District 2, now have significant deficits from unpredictable enrollment drops.

The advocates and Council candidates said that, without a break from D.O.E., these schools would be saddled with debt right at a moment when more resources are needed due to learning loss, the emotional fallout of being in lockdown and additional staffing needs.

Marte, a candidate for Council District 1, said forcing  schools to return critically needed funding at this time simply is not fair.

“We’re here because our schools are facing a budget crisis that nobody is talking about,” he said. “Under-enrollment during a pandemic is not a fair reason to cut funds. D.O.E. needs to relieve stress from the lives of our teachers, principals, parents and students who are already dealing with so much. We’re calling for amnesty because it’s the D.O.E.’s job to protect high-quality public education.”

Bottcher, who is running for the West Side’s Council District 3 seat, joined the press conference virtually via a laptop propped on a small table in front of the former courthouse’s steps. He said “Tweed” must “do the right thing.”

“An entire generation of young people are going a year or more without a proper education or socialization,” he said. “We won’t know what the full impact of this is yet for years to come. The D.O.E. must do the right thing and grant amnesty now.”

Bottcher reportedly had another Zoom meeting and didn’t have time to make it down to Chambers St. More than 50 participants attended virtually, and were able to watch the in-person rally from the laptop Bottcher was on. Each speaker spoke on the Zoom on their phones with just the audio, so that virtual participants could hear them.

Jeannine Kiely, a Democratic district leader, public school parent and Community Board 2 member, explained how COVID is stretching schools’ resources — and forcing them to add more.

Also speaking was Mar Fitzgerald, a founding member of FREE: Families for Real Equity in Education, a public school parent, a C.B. 2 member and co-president of the Village Independent Democrats. She said there is no way schools can endure cuts right now.

“Do you not know that schools have exhausted every cent trying to accommodate this new way of learning?” she said. “Do you not understand that by taking funds from already severely underfunded, overburdened schools you will kill any chance of teachers and parents helping students catch up and make up for the most disastrous school year in the last century? So, I am appealing to every single New York City public school parent — we are 2 million strong — to let Bill de Blasio know that we will not stand for one more cut to our children’s education or their futures!”

Cheryl Wu, a co-founder of FREE and a public school parent, said students with special needs are hurting even more right now.

“The parents of children with learning disabilities are having a really difficult time,” she said. “The money we spend now will be paid back to us many many times over. When we invest in those who are most in need, everyone will be lifted up. The D.O.E. cannot champion equity until it gives funding to those who need it most.”

Emily Hellstrom, the vice president of Community Education Council District 2 and the chairperson of the Students with Disabilities Committee, said the cuts, if allowed, would hit schools in traditionally vulnerable areas.

“We know what gets cut when we underfund: its music, art and special education,” she said. “Our children should not be deprived of these things. We need our federal, state and city funding to step up and support our principals, teachers, students and families. Don’t waste our time worrying about the future of schools: Make an announcement today and give our schools the amnesty they need.”