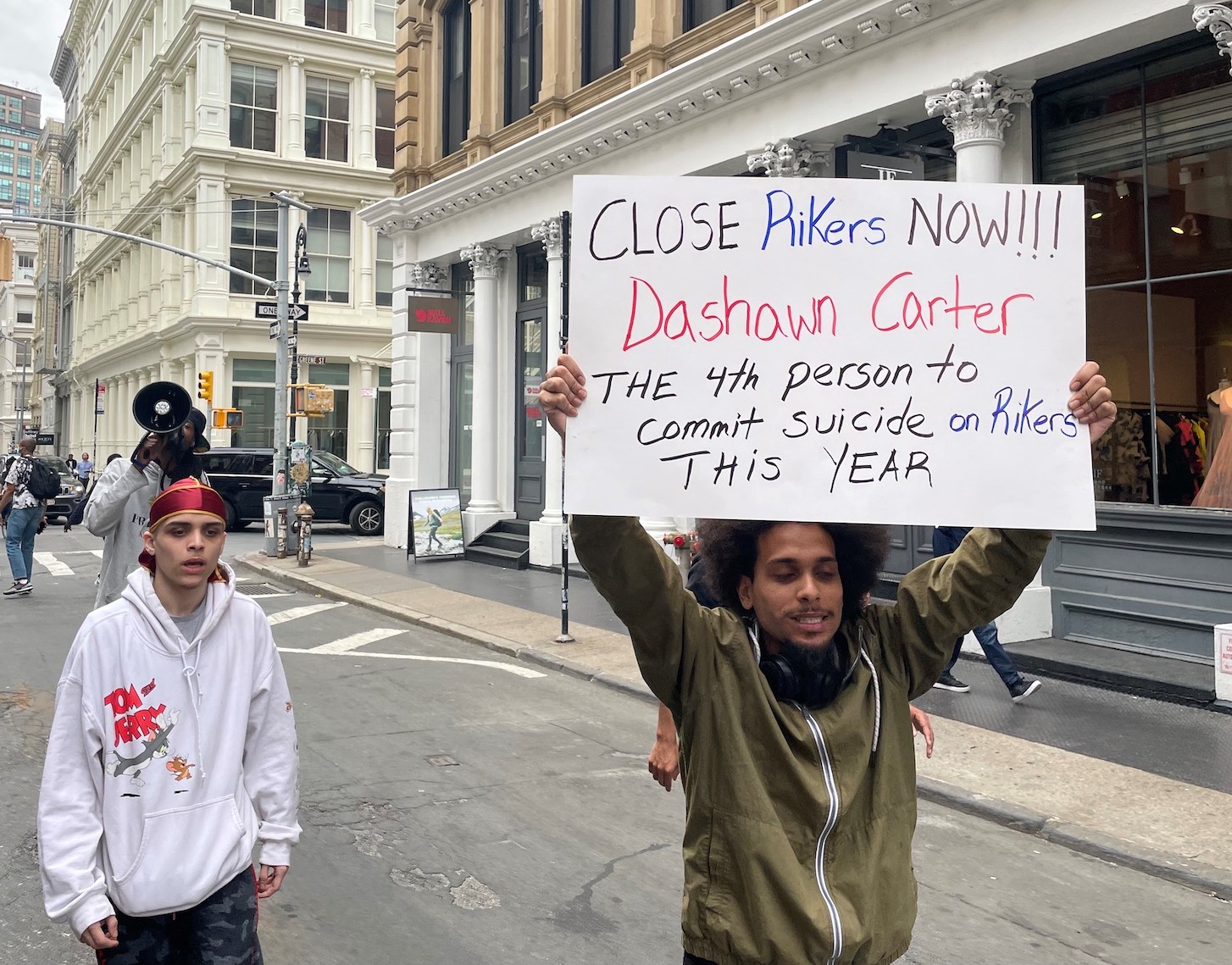 BY DASHIELL ALLEN | Marching through the streets of Lower Manhattan on their way to Police Headquarters in the Civic Center, five protesters demanded justice for Dashawn Carter, 25, the fourth man to die on Rikers Island this year.

As The New York Times reported, Carter was found dead in his cell over the weekend at the troubled jail complex, having hung himself.

Dariel Ali, who spoke to The Village Sun while marching down Grand Street and Broadway in Soho, said he was a childhood friend of Carter.

“Dashawn Carter was my friend. He was like a brother to me,” he said. “He was a victim of the foster care system. His mother died [when he was] 17 years old, and for him to commit suicide on Mother’s Day, May 8th, [Carter actually died May 7] leads you to know and see that Rikers pushed him to a mental state in which he calculated, ‘I’m going to kill myself exactly eight years from when my mother dies, when Mother’s Day falls, on May 8th.’

“So think about the implications of the situation that he was faced with and the conditions that he was faced with that pushed him to the brink of suicide on Rikers Island,” Ali continued. “He’s the fourth person to commit suicide on Rikers Island this year. God knows how many more because they don’t all get reported in the news. Everything doesn’t get documented. God knows the pain that I feel right now as a friend.”

Ali added that Carter was very passionate about sports, in particular, basketball. Before his death, he had been homeless.

“He loved technology. He loved to build things. He was an innovator,” Ali said. “He was very smart. He was very articulate. He was a people person. He was never in the mix — he would never get caught up with anything going on around him. He was always sticking to himself and staying deadfast to his priorities. Despite the adversities that he faced and the homelessness that he battled, he still managed to graduate high school and go to college and get some type of college education.”

To his friends, the best way to achieve justice for Carter is to shut down the Rikers Island jail complex once and for all.

“Closing Rikers would not only save so many more lives that are potentially in danger,” Ali said. “People with mental health issues need to be faced with care and compassion, not faced with force, not faced with solitary confinement, not faced with negligence. Dashawn Carter was negligently tended to, they did not take care of him.”

He pointed out that, in fact, Carter had been placed in a state psychiatric hospital only a week before his death in the general jail population.

On Monday, the New York City Board of Correction released a report and recommendations on the first three deaths on Rikers Island this year, of Herman Diaz, 52; George Pagan, 48; and Tarz Youngblood, 38.