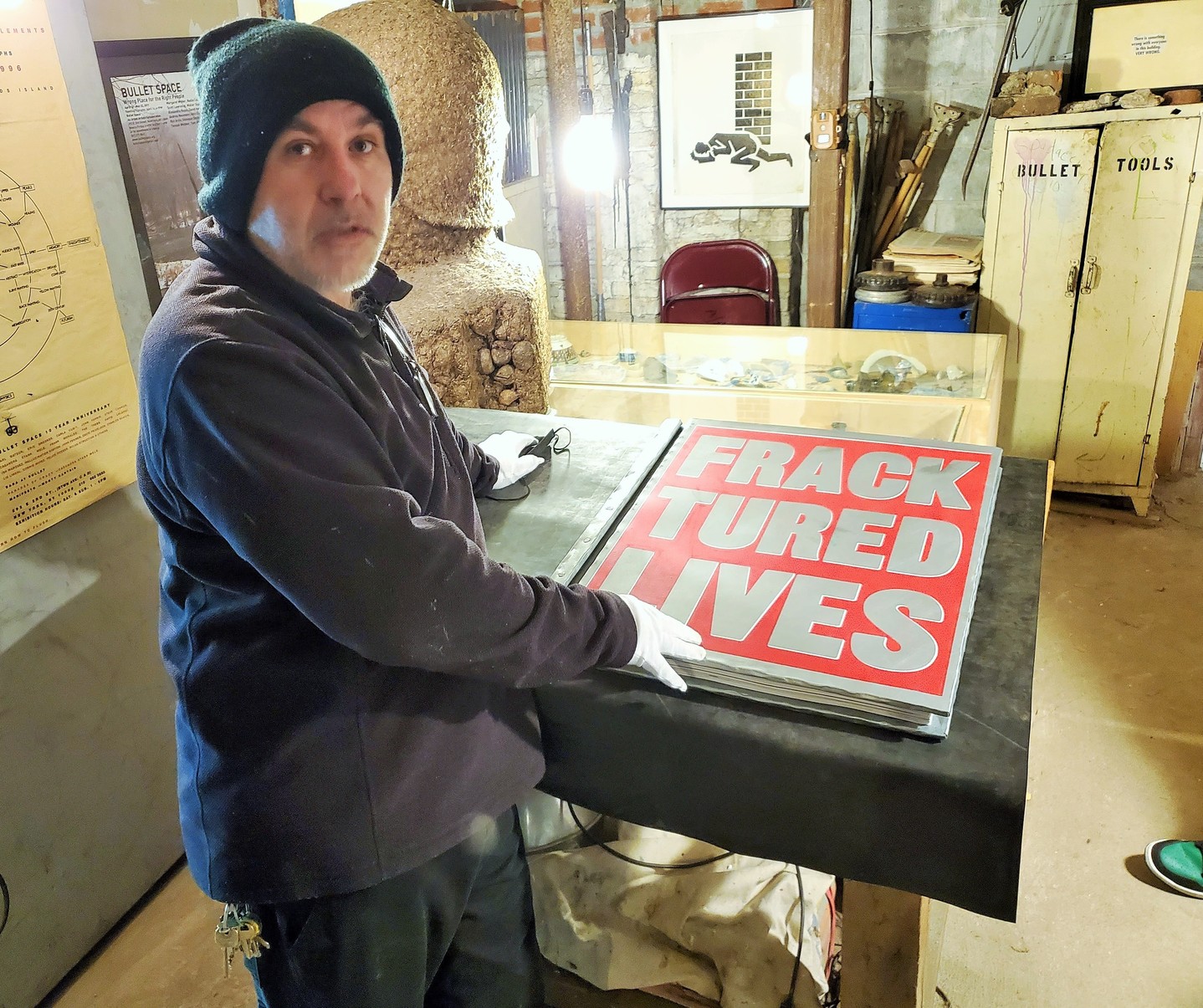 Andrew Castrucci at Bullet Space with one of the 50 copies of the limited-edited art-poster book "Fracktured Lives." (Photo by The Village Sun)

BY LINCOLN ANDERSON | Although he’s best known as the cofounder of Bullet Space, a former “art squat” on E. Third Street, Andrew Castrucci nowadays splits his time between the East Village and a place Upstate.

Bookending, as it were, these two domestic realities are two jumbo-size poster books that Castrucci has produced. These are literally coffee-table books, in that they are each as big as a small coffee table.

A specialist in silk-screen printing, Castrucci passes on the skill in his Design and Guerilla Graphics class at the School of Visual Arts, where he has taught for 20 years.

The first of the two books, “Your House Is Mine,” covered the years 1988 to 1992 and dealt with issues like squatting, the heroin scourge and the homeless Tent City in Tompkins Square Park.

The second, a weighty tome that Castrucci produced last year, is titled “Fracktured Lives.” It deals with one consequential topic only — the battle to stop hydraulic fracturing in New York State. Known, for short, as fracking, the process forcibly extracts natural gas from shale by pumping toxic chemicals, including methanol, into it at extremely high pressure.

Another eventful happening on a larger and more tragic scale, the World Trade Center attack, was what compelled Castrucci to stake a claim Upstate.

“Post-9/11, I was stressed out,” he said. “I was losing my mind. We were living in a war zone. I lived through the heroin epidemic, the squatter epidemic, the war zone — Tompkins Square Park, the riots — 9/11. There’s a huge exodus up here. We’re all in exile up here.”

By “up here,” he was referring to Upstate, in general. His own place is in Mount Upton, a hamlet in south central New York.

“We’re considered the poorest part of New York State,” he noted. “It feels like being a squatter again.”

Squatting — which saw artists and others take over around three dozen abandoned East Village tenements — was about economic realities, too, namely, affordable housing and survival. In the end, in a deal hashed out under former Mayors Giuliani and Bloomberg, squatters in nine of the buildings were able to convert them to legal affordable housing and buy their apartments.

“Three-quarters of the squats got evicted,” Castrucci reflected. “We had over 30 buildings. We had 500 squatters at the peak of the movement. We negotiated with 11 buildings. We went in [on the deal] with nine.”

Bullet Space was the first of the former squats whose occupants took legal ownership of the building. Castrucci’s “war” was finally over.

But as he settled in at his second place in Upstate, New York, Castrucci found he was back in a war zone all over again.

“You come Upstate to gather peace of mind and then World War III starts — Exxon and Mobil were the investors and they were paying all the farmers [for the right to frack on their land],” he recalled. “It was like ‘The Beverly Hillbillies.’

“A big part of ‘Fracktured Lives’ is environmental racism — where you poison people’s water. Some of the old-timers Upstate are still upset about towns being flooded for reservoirs.”

In another kind of flooding, parts of the East Village have been inundated with social-service facilities, like meth clinics, he noted.

“We’re overloaded on E. Third Street,” he said. “That’s part of the Lower East Side life — we help the poor. But they dump here.”

“Fracktured Lives” sports sheet-metal plates for its cover. It measures 21 inches by 24 inches and is 2.5 inches thick. It’s the kind of limited-edition work — only 50 copies have been printed — that finds a home in the collections of top museums and libraries. Buyers so far include the likes of M.I.T., Princeton, Howl Happening, the Library of Congress Special Collections Division and New York University’s Fales Library.

Meanwhile, for the hoi polloi, Castrucci has made a broadsheet-style “newspaper” version of the book, 87 percent the size of the original dimensions, printing up 5,000 copies for sale. You can buy one, stamped and signed, for $20 at Printed Matter St. Mark’s, at Second Avenue and St. Mark’s Place.

While the first book took five years to produce, “Fracktured” — which he started working on in 2010 — took 10 years.

Each individual silkscreen poster on each page of each book was “pulled” by hand, meaning they are all one of a kind. It’s a laborious process. Castrucci’s son, Renzo, 16, helped him in the effort.

“Even the book is like a sculpture — it’s 25 pounds,” Castrucci said of “Fracktured Lives.” “I like the Gutenberg Bible metaphor.”

Roughly half of the book’s 65 posters are by Castrucci’s S.V.A. students. Also contained among the book’s pages is a letter by Yoko Ono, who has a place Upstate, written to Governor Cuomo on July 4, 2012, urging him to ban fracking.

“Right now, some people are trying to make easy money, and meanwhile ruin this country’s future, by a thing called ‘fracking,'” Ono wrote, in part. “It is clear to everybody in this city, and certainly most everyone in the state, that by doing this our beautiful natural green valleys of New York will be devastated and ruined forever. Nothing is worth doing that.

“It will immediately make the pure water we have now in the state become dirty and poisonous. Many adults and children will get cancer. The ones who have means will get out of the State. …

“Our Governor, and possibly the future President of the United States, we are counting on you,” Ono urged Cuomo. “You will only have to say ‘no more fracking in our State.’ That’s all. It’s as simple as that. We can make this State and the city connected to it, into a model of sustainability, with technologies and policies to produce clean energy and live in an enlightened land. Many wealthy people who are now thinking to flee from the potential disaster, will come back to join our model of a future for the world to visit and perhaps emulate. … Please say YES to life, and No to Fracking.”

There’s also a second Ono letter, in which she begs him, “Governor Cuomo, please don’t frack New York.” She writes about buying a farm upstate with John in the early 1980s and how Sean loved playing there.

“We asked if we could republish it,” Castrucci noted of Ono’s missives. “Sean Lennon would go to community board meetings [about fracking],” he added of Ono and John Lennon’s son.

Other images include protest banners and fliers from anti-fracking demonstrations Upstate.

In total, 177 artists, writers and “fracktivists” contributed to the project, notably including Joseph Beuys, Sue Coe, John Fekner, David Sandlin and Walter Sipser, along with Castrucci, his wife, Alexandra Rojas, and Renzo. In addition to the 65 posters, there are 36 pages of text. Castrucci edited the whole thing.

“People from Upstate and New York City, we have some of the best drinking water in the country,” Castrucci said. “People were really afraid we were going to ruin our water, affecting 17 million people.”

“Fracktured Lives” was started with the goal of ending fracking in New York State. But the fracking fight took a turn for the better in 2014 when Cuomo, through executive action, made the bold decision to outlaw the practice in New York State.

“He was about to approve fracking — then he changed his mind,” Castrucci recalled.

However, there was nothing stopping future governors from reversing course on the issue. Last year the state Legislature codified the fracking ban, making it permanent.

Creating the book was an education for Castrucci, as well. He learned facts about fracking that he didn’t know before.

“I think we’re fracking in 43 states now,” he said. “It turned out 90 percent of the fracked gas, they sell overseas, to Germany, France, China.”

At the end of the day, both books, “Your House Is Mine” and “Fracktured,” are “acts of resistance,” Castrucci said.

Andrew Castrucci currently is the subject of an exhibit, “Andrew Castrucci: 36 Years at Bullet Space,” at Howl Happening gallery, at 6 E. First Street, running from Oct. 23 to Dec. 5. The show is framed around the two books “Your House Is My House” and “Fracktured Lives,” which are on display. For more information on the exhibit, click here.