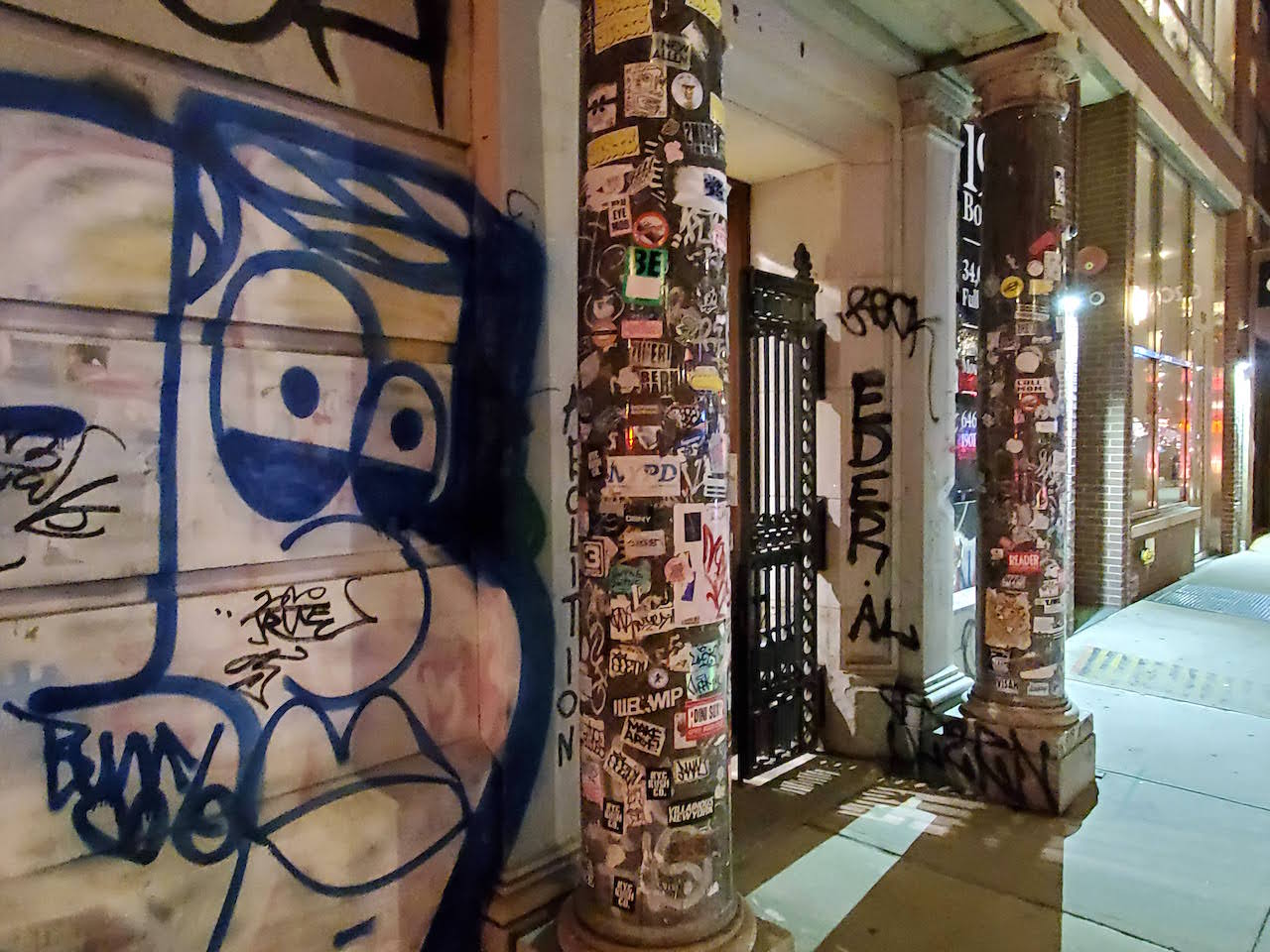 The building offers an "exclusive private entrance." (Photo by The Village Sun)

BY THE VILLAGE SUN | Updated April 3, 1:00 a.m.: A majestic, though graffiti-covered, former bank building on the Bowery once home to quirky photographer Jay Maisel is poised to become a hive teeming with worker bees.

RFR is marketing the entire 34,000-square-foot space as fully furnished and move-in ready.

At least it won’t be another hotel.

Floor plans show the space filled with rows of workstations on each floor.

The page also notes the building offers rooftop views and its own water-tank mural by Shepard Fairey.

The property has an “exclusive private entry on Bowery,” according to the site.

The ground-floor space that is currently home to Supreme, the skateboard-culture store, with a separate entrance at the corner of Spring St. and Bowery, is not part of the offering.

AJ Camhi, executive vice president and director of leasing at RFR, told The Village Sun the space is already built-out for office use thanks to the previous tenant, Trunk Archive, a photo-licensing outfit.

“It’s an amazing opportunity for such an iconic building,” he said, “to be able to occupy your own location.”

Asked if a hotel or residential use for the property had been considered, he said, “The highest and best use is office. It’s fully furnished. It’s what we call ‘plug and play.’ It’s turnkey.”

Of course, so many people are working from home nowadays due to the pandemic, and it’s predicted many may never return to traditional offices. Asked about the confidence level in finding a commercial tenant amid that climate, Camhi said, “I can’t comment on that.”

The six-story Renaissance Revival/Beaux Arts-style structure was originally constructed as the Germania Bank Building in 1899. After continuing as a bank into the 1960s, it was bought by award-winning photographer Maisel in 1966. The building was designated a New York City landmark in 2005.

In 2015, it was bought by Aby Rosen, founder of RFR Holding. Rosen owns the Chrysler and Seagram buildings, among others, and was reported to have been thinking of turning the former into a hotel.

The 2019 documentary film “Jay Myself” recounts Maisel’s moving out of the cavernous former Bowery bank building after living there for nearly 50 years.