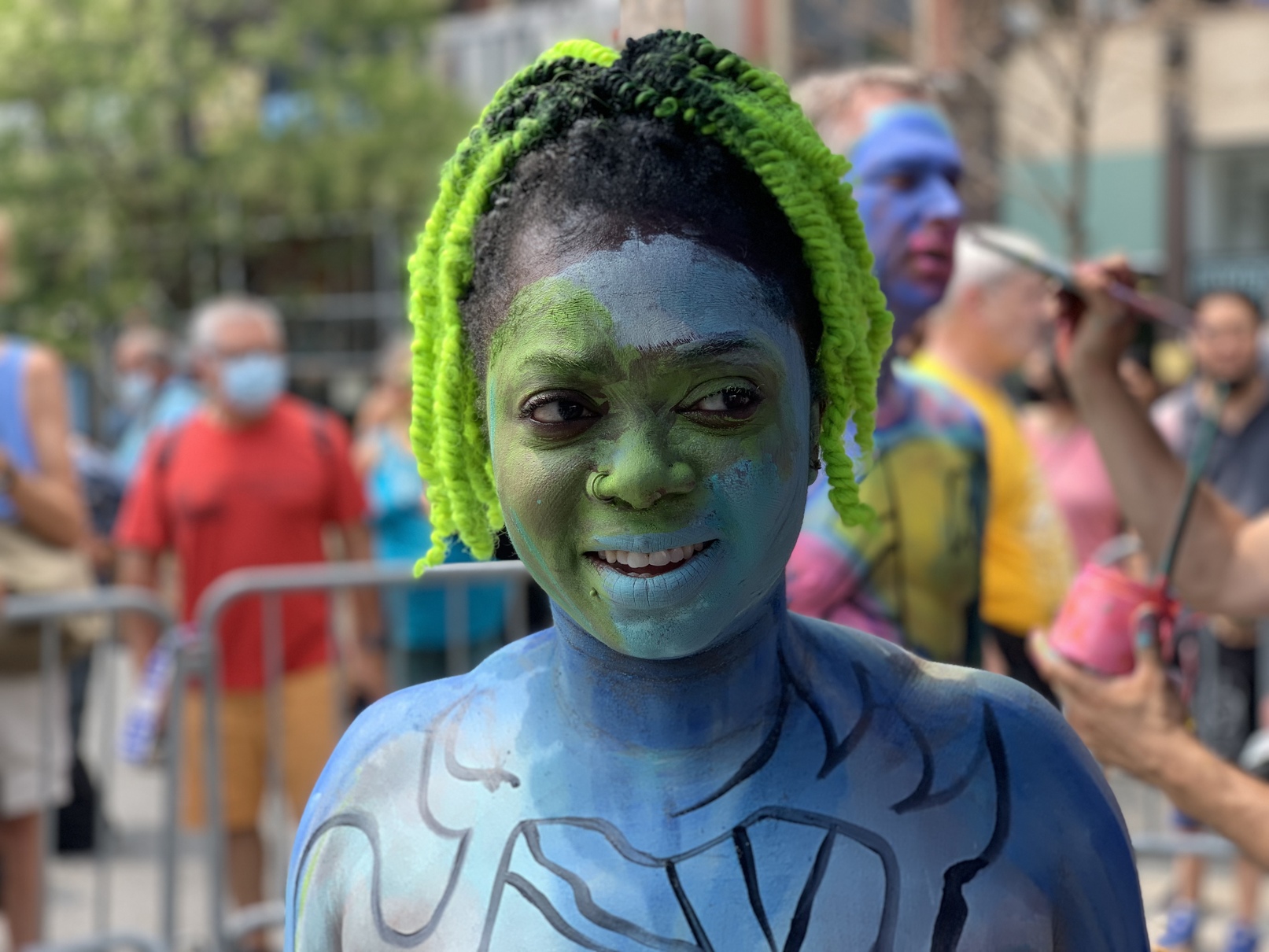 Model Tasha Dougé, who described herself as “Haitain-infused and Bronx-bred," was one of the Bodypainting Day models. (Photo by Nixie Strazza)

Fleshing out the skinny on Bodypainting Day

BY NIXIE STRAZZA | It was no normal Sunday at the Union Square farmer’s market on Sun., July 25. Although the greenmarket is colorful, a lot more color was added by the eighth annual New York City Bodypainting Day.

Founded by Andy Golub after his high-profile arrest for public nudity in 2011, the festival celebrates the body’s innate beauty, fostering human connection between artists, models and the world around them. By baring it all, participants are a living and breathing testament to the value of self love over the shame society imposes on the natural form.

“Resilience” was  the theme for this year’s event, fitting as the world rebuilds after a year inside. The artistic community was hit especially hard by COVID-19 as theaters, galleries and concert venues around the world were forced to shutter in the name of safety.

Nevertheless, with strict social distancing guidelines and masks, Bodypainting Day went on undeterred in 2020. Golub felt it was necessary to continue the event to uplift a city plagued by fear and uncertainty. Now vaccines are widely available and New York is creeping toward its former glory. This year’s event was a celebration of the cautious reentrance to normalcy and the joy of public gatherings.

Groups of models and artists began their work under a large tent that protected them from both the elements and the gaggle of photographers vying for a shot of these daring — and eye-catching — subjects. Some painted in pairs, one model for one artist, while others served as both the canvas and the creator.

By noon, Golub had finished a handful of summer-hued models and was busy painting an intricate design on a young woman covered in blue and green. It was an exuberant atmosphere as models and artists exchanged tidbits about their lives. One woman described her home on Hawaii’s Big Island and veterans remarked on the event’s turnout compared to years past.

Fran Beallor, a New York City-based artist, was soaking in her first bodypainting experience. Word of mouth and encouragement from friends and colleagues led Beallor to the offbeat event. She was grateful for the opportunity to collaborate with David Ward, a longtime model and board member of Human Connection Arts, Golub’s foundation. As opposed to her typical medium, Beallor remarked, “It’s like painting a sculpture. So when you have a flat canvas, you’re creating a 3D illusion on it. But here I have a 3D canvas and I can just go crazy and make a design.”

Bodypainting Day was born from the desire to bring together an array of diverse artists under the protection of Andy Golub’s name. Following his arrest, Golub took to Times Square to showcase his nude canvases, armed with reassurance of legality from prominent civil-rights attorney Ron Kuby. Media coverage garnered attention beyond the five boroughs and increased interest from the community called for a dedicated event.

Bodypainting Day is not meant to be salacious or scandalous, nor to exploit the innate sexuality of the human body to advertise a product or promote a way of thinking. It is about being comfortable in your own skin regardless of the physical ideals society foists on us.

Golub opts to create a safe space where vulnerability is possible, believing that it is at the heart of all human connection. Painting a starry scene on her model, Colombian artist Maria Naranjo added, “When you do these kinds of things that connect you with people and connect you with life…I think it’s magical.”

Inspired by a dream and a cat mask — “Not like a COVID mask,” she clarified —  Beallor decorated Ward with a background reminiscent of an optical illusion and an abundance of fruit. On his back was a rendition of the aforementioned mask, with two striking red eyes contrasting with the rest of Beallor’s palette.

In the spirit of the day, we made our own human connection when Beallor painted a kiwi on Ward’s knee at my suggestion. The fruit grew out of the thoughts and conversations of two people.

Unlike typical mediums, a human canvas possesses an energy and spirit that turns the process into a collaboration. Golub has the utmost respect for his models and is inspired by their courage to show the world every part of themselves.

“These people live life to the fullest,” he declared.

As he held his paintbrush, Golub said his art is undoubtedly influenced by the person he is painting. Craig Tracy, a well-known name in the body-painting world as a judge on the hit Netflix show “Skin Wars,” agrees.

“I just try to have a pleasant engagement or interaction with the model,” said the New Orleans native, “so that the process of working isn’t as laborious and robotic.”

These interactions go beyond asking the model his or her favorite color or sign, but creating art attuned to the personality that the model projects.

“Having a model that does have the ability to make your day better with a smile or gesture actually makes the art much better,” Tracy laughed, as his own model, Emma Rosche-Ritchie, flashed an exaggerated grin.

During last winter’s lockdown, Human Connection Arts opened a studio space in Greenpoint, Brooklyn, to hold outdoor events that were in compliance with city guidelines. It was important to Golub to maintain human connections amid the isolation. It was about the organization’s “courage and resolve,” he said.

In terms of the theme of resilience, Beallor saw it as reason to live in the moment, especially after the uncertainty of the pandemic.

“I feel you never know what’s going to happen one year to the next,” she said. “If I don’t seize opportunities now, I’m never gonna do it.”

The artists and models felt grateful to be standing in the light of the end of the tunnel with an opportunity for unabashed expression.

Human Connection Arts and Bodypainting Day came into fruition alongside heightened technology usage and social-media drastically changed the way in which we create connections. Images and information shared across a wide demographic can benefit artists and creators yearning to be seen, but isolate others within the confines of a screen. The value of in-person interaction is invaluable, a truth made clear by the grueling experience of 15 months of lockdown.

Golub’s goal is not necessarily to persuade others to take up bodypainting, but to inspire others with the confidence to make the world a more colorful and unique place.

“I wanted to show people,” he said, “that if I can do something as unusual or as crazy as this, you can do whatever it is that lies in your heart.”