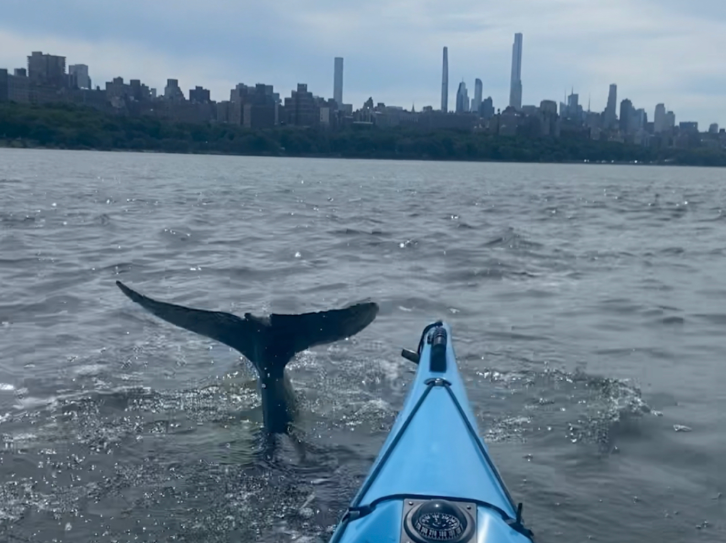 "Oh my God, there are two of them!" Kayakers enjoyed paddling with dolphins in the waters off of Harlem. (Photo by Habiba Hussain)

Fin-tastic! Dolphins cavort with kayakers on the Hudson

Sharks may be freaking out swimmers at the beach, but dolphins are delighting kayakers in the Hudson.

W42ST.nyc reports that paddlers from the Manhattan Kayak Co., at Pier 84, at W. 44th Street, spotted “at least three” of the graceful aquatic mammals frolicking in the river off of W. 125th Street.

Habiba Hussain, who frequently kayaks in the Hudson, posted video on Instagram of the splashy incident, which occurred early Sunday afternoon. She said at first she didn’t believe it was really dolphins.

“We do regularly see big fish jumping in and out of the water,” she said. “I was with a friend at the time and she said, ‘I think I just saw a dolphin!’ I didn’t see them at first, so I said, ‘I’m pretty sure it was just one of these large fish that are all around the Hudson.’ But then we saw them jumping and I was like, ‘Nope, those are dolphins!’”

The animals, apparently unfazed by the kayakers, stuck around the boaters for about an hour, jumping in and out of the water until two motorboats drove by, “and that probably scared them off,” Habiba said. “But before that, they seemed happy to hang out around the area.”

The rebounding of bunker fish, also known as menhaden, is said to be what’s been drawing sharks — as well as whales, dolphins and seals — in closer to the shore. New York State passed legislation three years ago to protect the Atlantic menhaden, which were being severely overfished.