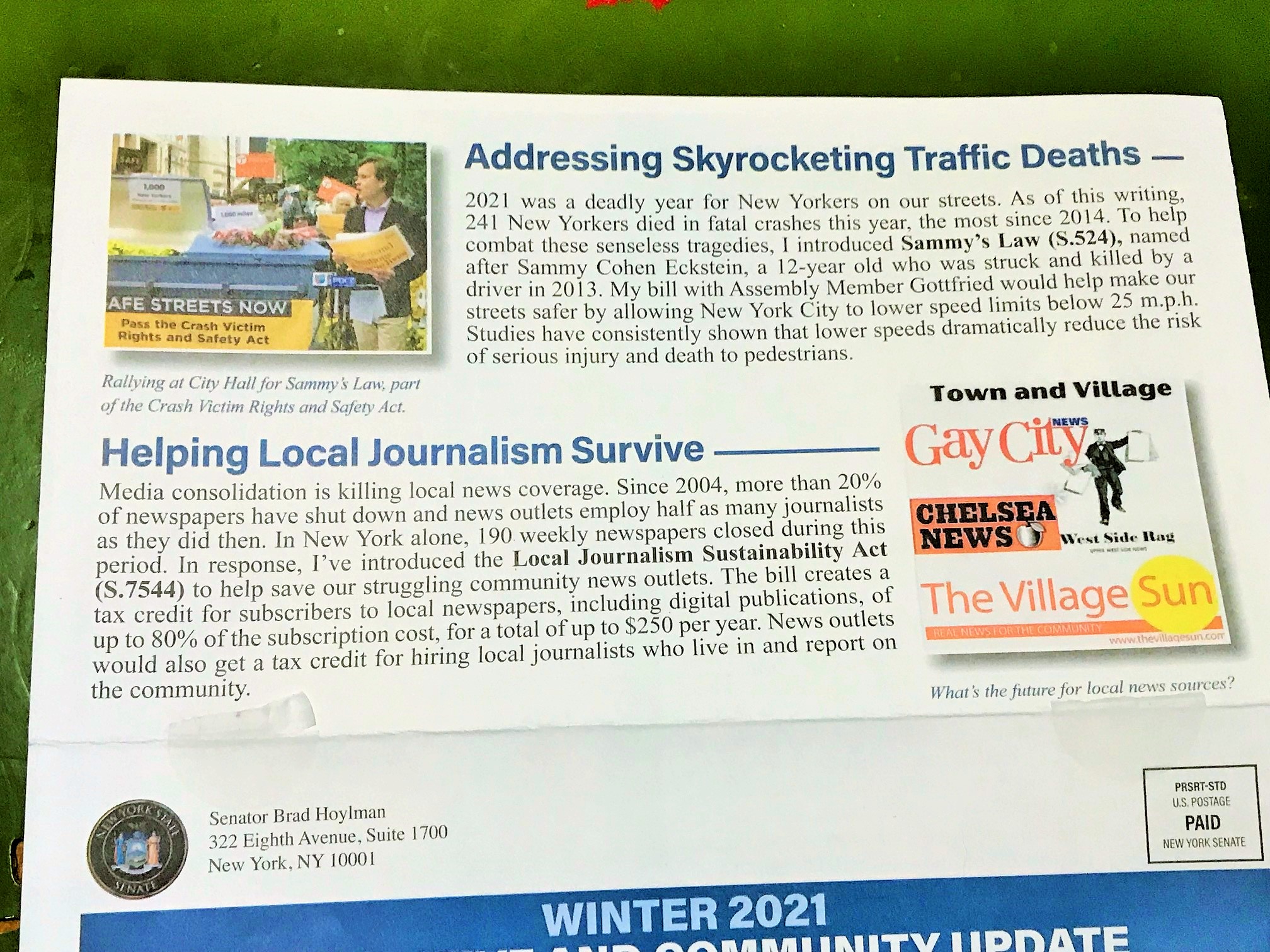 In his winter 2021 mailer to constituents, Brad Hoylman highlighted The Village Sun as being among local newspapers and blogs doing a good job providing community news.

Extra! Read all about it! Hoylman intros bill to support local newspapers

BY THE VILLAGE SUN | Don’t stop the presses!

State Senator Brad Hoylman has introduced a bill to support local newspapers and other local media by means of tax credits for subscribers and the media outlets themselves.

Hoylman hailed the bill as an important measure to counter the negative impact of “powerful media conglomerates that threaten to shut out the issues important to our local communities.”

The bill, S7544, is currently in the Rules Committee of the state Senate. The Assembly’s companion bill, A8585, is sponsored by Carrie Woerner.

The Local Journalism Sustainability Act was introduced in Albany on Nov. 24. The bill would amend the state’s tax law to provide two tax credits.

Individuals who subscribe to a local publication would get an annual tax credit for 80 percent of subscription cost in the first year and 50 percent in subsequent years, up to $250 a year.

Eligible local news organizations that employ full-time local journalists (those that live within 50 miles of the area they cover) would get a quarterly tax credit up to 50 percent of the salary for the first year of their employment and up to 30 percent in subsequent years, up to five years total, for the first $12,500 in wages paid to the journalists each quarter.

To qualify, the primary purpose of the publication — either print or digital — or broadcaster must be coverage of local community issues, and the oulet cannot employ more than 1,500 people.

“Community news is the bedrock of our local democracy,” Hoylman said. “But since 2004, more than 20 percent of American newspapers have gone out of business, including 40 percent of weekly papers in New York. Local news organizations are struggling to stay afloat against powerful media conglomerates that threaten to shut out the issues important to our local communities. The Local Journalism Sustainability Act is a commonsense way to help local news outlets survive and continue to inform the public in a tumultuous media landscape.”

Assemblymember Woerner said, “News and information from local sources about our communities and community institutions help us to trust and understand our world and our place in the world. It is a terrible irony that, as the ability to communicate information increases, our ability to know and trust the sources of communication has precipitously decreased. Whether small towns or big cities, New Yorkers need local journalism to reliably monitor and report on uniquely local concerns, from school board policy and the actions of municipal boards to the volunteer organizations and activities that enrich our lives.”

“Local journalists serve as the eyes and ears of the community, gathering and reporting vital facts about the actions of local governments, community organizations and individuals,” Kennedy said. “The existence of a robust local news environment has been shown to enhance civic engagement, reduce hyper-partisanship and help prevent increase in the cost of government borrowing.

“But the business model of local news has been destroyed by the loss of advertising revenue to tech giants, resulting in a catastrophic decline in journalism jobs,” she said. “‘News deserts,’ areas in which there is little to no local news coverage, have expanded throughout the country.

“This legislation by Senator Brad Hoylman and Assemblywoman Carrie Woerner serves as a temporary bridge to a new business model for local news that will support local jobs for community-based journalists, while also rewarding taxpayers who purchase subscriptions to local news organizations. This legislation will help New York State residents to remain informed about and engaged in their communities.”

According to data from the Bureau of Labor Statistics, as of May 2020, 5,920 New Yorkers were employed as journalists, reporters and news analysts — more than any other state in America.

Since 2004, more than 20 percent of American newspapers have shut down. In total, they now employ half as many journalists as they did 17 years ago. The decline has been especially stark among New York’s weekly newspapers, with 190 of them closing shop in this time period.