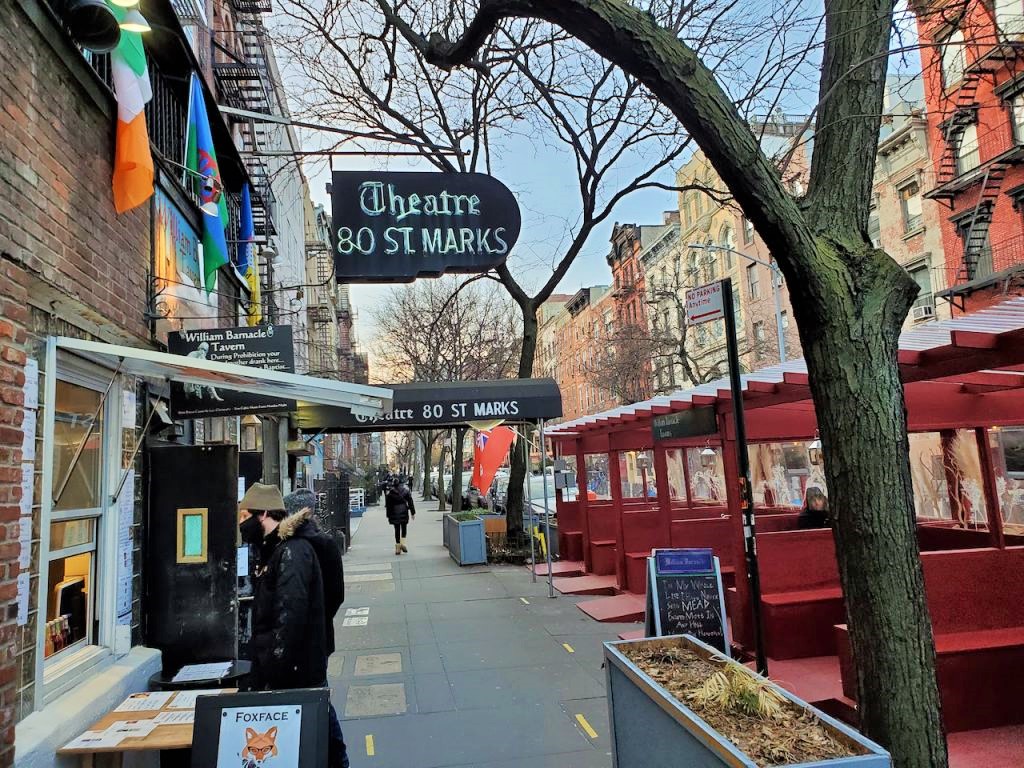 In a dramatic twist, Theatre 80 St. Mark's has dodged a forced auction sale. (Photo by The Village Sun)

BY LINCOLN ANDERSON | The show will go on at Theatre 80 St. Mark’s.

Its owners, Lorcan and Genie Otway, have chosen their only current option to avoid a looming sale of the property at auction by a ruthless creditor.

On Wednesday, they filed for bankruptcy under Chapter 11.

Maverick, which has been described as a predatory creditor, had sought to auction off the East Village theater complex soon, sometime around Jan. 8 or Jan. 9, according to Lorcan Otway.

A previous auction date in November was delayed after the Otways went to court and got a temporary restraining order (T.R.O.)

However, the T.R.O. expired about two weeks ago. Maverick then gave the Otways a little more time — only until today, though — to try to negotiate a plan to pay off their debt. In the event the offer was not satisfactory, Maverick then intended to move ahead with setting up the auction.

Now, though, by declaring Chapter 11, it gives the theater’s owners “time to reorganize,” Lorcan Otway said.

While Chapter 7 bankruptcy would mean a forced sale, Chapter 11 does not. As Otway explained it, under Chapter 11, “everyone gets paid,” meaning all the creditors and others who may hold debt.

The debt currently stands at $8 million — the “perfect storm” combination of having refinanced the property’s mortgage right before the pandemic, followed by the mandated shutdown of theaters during the pandemic.

Otway’s plan is to ask Governor Kathy Hochul for a low-interest loan for Theatre 80. The amount would be a bit higher than the current debt.

Otway holds out hope the loan will come through, largely due to the growing political support he is receiving for the idea. So far, Otway said, he has the committed backing of Congressmember Carolyn Maloney, as well as state Senator Harvey Epstein, plus City Councilmember Carlina Rivera. He’s hopeful that state Senator Brad Hoylman will also soon join the effort.

“We just got off the phone with Brad Hoylman’s office,” he told The Village Sun on Thursday afternoon around 2:30 p.m. “He just wants to see our briefing materials, which we’re sending to him.”

Otway is optimistic for Hoylman’s support, noting he has joined the state Senator at rallies in the past in the East Village to prevent high-rise development on Third Avenue and in Chelsea to save the Hopper Gibbons House, a former stop on the Underground Railroad.

The Albany legislators’ support is particularly critical, he said, in winning Hochul’s buy-in.

Otway broke off from the phone interview for a minute.

“‘Someone’s asking about the footprints,” he apologized. He was referring to the actors “walk of fame” — shoe prints in slabs of cement embedded in the sidewalk in front of the St. Mark’s Place theater.

“Over here we have Joan Crawford and Myrna Loy,” he could be overhead explaining. “Gloria Swanson’s down this way… .”

Returning to the phone interview, Otway was asked if by declaring Chapter 11, that means the auction threat is now off permanently.

“I’m sure they will go to court and try some maneuver,” he shrugged of Maverick. However, he assured, as a result of the bankruptcy filing, now “all contracts are frozen” and the auction is off.

Before having learned of the bankruptcy filing, The Village Sun reported yesterday on the threat of a forced auction sale of Theatre 80. In turn, that report was hurriedly followed up by The New York Times, which published an article of its own today.

Otway is welcoming the media coverage for an institution that is an integral part of the East Village cultural scene. The theater, at 80 St. Mark’s Place, has hung on, even as 75 other New York City venues have fallen by the wayside in the last decade.

“Our business grew 800 percent over the last eight years,” he noted.

In addition to the business’s growth, there is also lots of history involved at Theatre 80, which itself is nearly 60 years old.

“We have 350 years of theater in this family,” he said, proudly.

And the complex has more going on than just a theater, including the William Barnacle Tavern, Foxface sandwiches and a bed and breakast. The bar has been the place’s biggest revenue generator during the pandemic.

Speaking of which, Otway said he had to end the interview, noting it was time to “set up the tavern” for the evening.

Beyond the bankruptcy strategy of saving the property, Otway has previously spoken of the idea of working out a sponsorship deal, under which some corportation could brand the theater. Another dream of Otway’s is that an “angel investor” would swoop in and save the day, as has happened at St. Brigid’s Church and the Boys Club building on Avenue A.