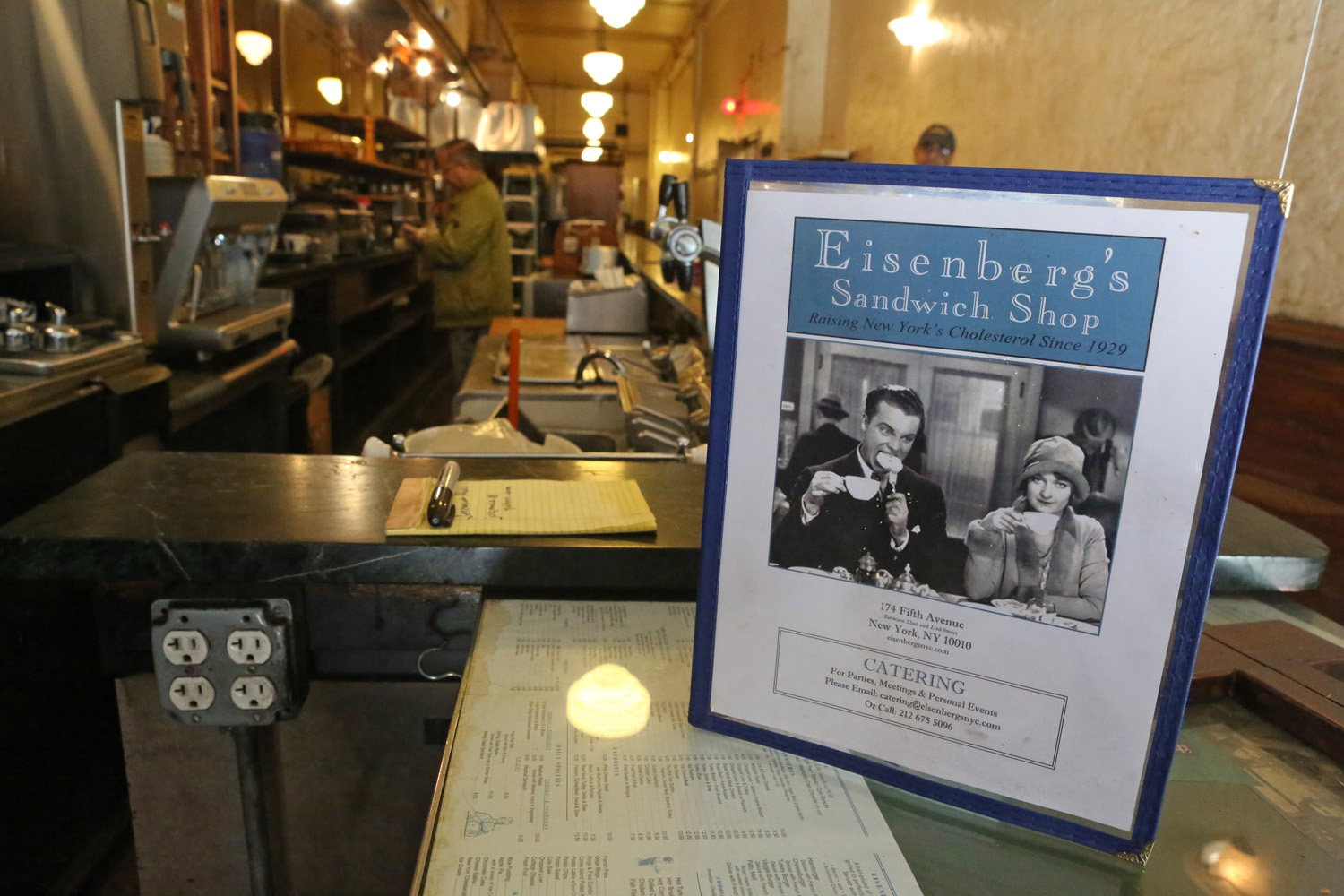 A menu inside the now-closed Eisenberg's Sandwich shop on Sat., March 13. (Photo by Jefferson Siegel)

Eulogy for a diner: Eisenberg’s was ‘one of the last places with character’

BY JEFFERSON SIEGEL | Outer-borough New York has its fair share of diners, many commodious estates with parking lots, dessert carousels and lots of space between tables. Manhattan, where every square foot of real estate must provide outsized returns, recently lost Eisenberg’s, which, according to the sign out front, has been feeding the masses since 1929.

For decades Eisenberg’s thrived in the shadow of the Flatiron Building, just around the corner from a variety of dine-and-dash food and coffee outlets. Until the pandemic, it was still possible to balance on a stool at the diner’s crowded counter just inches away from the grill as your beef patty hissed and splattered next to a pile of home fries while the patron next to you passive-aggressively elbowed you for just an inch more of personal space.

New Yorkers of a certain age may recall the dark mahogany counters of Schrafft’s, the marble trays of the Automat, where a worker would splay out 20 nickels for your dollar bill, and the curvy counters of Chock full o’Nuts. These were, for the most part, local chain eateries, but still retained an easygoing ambience unrecognizable to today’s “grab n’ go” app orders.

The esthetic of Eisenberg’s can be summed up in its slogan: “You either get it or you don’t.” Those who came to balance on those 24 red stools might have been craving comfort food, nostalgic for bygone days or just seeking a respite from avocado toast and chai lattes.

Last Friday, as passersby stopped in their tracks at the sight of the “For Lease” sign in the place’s window, Jackie Valiente, the building manager since 1976, was inside filling a small dumpster with the remnants of the popular soda fountain.

“The grandmothers, the mothers, the daughters and their granddaughters. Generations used to come here,” he reminisced while standing next to a stack of photos of notable diners that had filled a wall facing the grill.

A diner is like the town square where locals can meet for coffee and conversation or just ignore each other with a newspaper. Coffee is serviceable and anyone asking for “fast food” could be confronted by a cook in a greasy apron, maybe even chewing a cigar, asking, “What’s ya rush?”

In 1929, the dawn of the Great Depression, poverty overwhelmed millions and businesses were failing as tent cities sprung up in Central Park. It wasn’t exactly the optimal atmosphere to start a business when Monas Eisenberg decided to open a sandwich shop. People have to eat, right?

Perhaps the classic diner image is Edward Hopper’s 1942 “Nighthawks,” which to this day incurs debate as to where that late-night counter might have been. It certainly wasn’t Eisenberg’s, which was not strictly a diner in the silver railroad-car sense, but qualified by dint of its narrow, 14-foot-wide space. You could practically reach over to the grill and flip your own burger.

Diners are a touchstone of American history, at one point even figuring prominently in the civil-rights movement. In 1960, at a lunch counter inside a Woolworth’s in Greensboro, North Carolina, four young Black men entered and took seats at the counter. At the time, Blacks were supposed to order from a stand-up counter and then leave, but the Greensboro Four sat their ground. Expecting to be arrested, they eventually left peacefully when the store closed early.

Long before the pandemic, the almost leisurely pace of dining in the city was already evaporating. Diners like  Cheyenne in Hell’s Kitchen, the Market on the far West Side and Kiev in the East Village had established beachheads in grittier days. In the 1970s the Belmore Cafeteria on Park Ave. South imposed a minimum charge of 25 cents “at all times strictly enforced,” but likely granted leeway to the cab drivers who made the spacious dining room their second home. Eventually these bastions of comfort food would fall to the onslaught of soaring rents and “finer” dining.

And yet even financial Masters of the Universe and tech titans must sometimes yearn for a simple grilled cheese with an egg cream while reflecting on the fortunes made (or lost) earlier in the day. Eisenberg’s represented the cherished tradition of eating an unpretentious soul-satisfying meal in Zen-inspiring surroundings.

Over several decades, a handful of Eisenberg’s owners fed the Midtown masses. Walking by one morning, Josh Konecky was lured in by the smell of bacon and became a regular (his go-to meal: the tuna sandwich). By 2005, Konecky’s printing business was being decimated by the Internet. Looking for a new line of work, he took a leap of faith and bought the place. His wife, Bonnie Taylor, would become his partner.

“The previous owner, Steve Oh, asked me, ‘What do you know about the restaurant business?’ I said, ‘Nothing. But I’ve gone to restaurants my whole life,’” Konecky said.

At that time Eisenberg’s was just a sandwich shop with a steam table and a deep fryer. When patrons began ordering non-menu items like hamburgers, Konecky installed a grill. He depended on the tastes of his customers and the expertise of the longtime workers, who he kept on.

Eisenberg’s became so well-known for its ambience — as much as for comforting breakfasts, matzo ball soup and egg creams — that moviemakers looking for authenticity often filmed in the noshery.

Yet, after a dozen years, Konecky saw an unappetizing future.

“How much can you charge for a tuna sandwich and make it work with these rents?” he wondered. In 2018 he sold the neighborhood gem to its last owner, Warren Chiu, an executive at the Warwick Hotels group.

“It’s one of the last places with any kind of character,” she lamented.

Valiente, the building manager, believes Eisenberg’s was the last remaining link to old New York. As happened in most of the country, as business slowed because of COVID, the diner soon closed, reopening only briefly for delivery service in April. That wasn’t enough to pay the bills, though, and it closed for good in September. The “For Lease” sign went up, making Eisenberg’s one of five shuttered businesses on its block of Fifth Ave. between 22nd and 23rd Sts.

A pizzeria and a coffee chain have already inquired about the space, but Valiente shot down those proposals as not a good fit for the neighborhood.

There may yet be light at the end of the 90-foot-deep shop. An interested party, who wants to preserve and maintain the look and feel of the original, may give Bubbe’s Original Recipe Chopped Liver (actually, Konecky’s mother’s recipe) another 92-year lease on life.