Erik Bottcher, a candidate for City Council in District 3, is calling for the city and state to begin a preliminary design and feasibility study for the previously planned 10th Ave. station on the 7 line at W. 41st St.

Following an expansion of the subway line seven years ago, its western end currently terminates at W. 34th St. at Hudson Yards.

“This station should have been built when the 7 expansion was first constructed, but it was not, and that was a big mistake,” Bottcher said. “But now, as President Biden and Congress negotiate a multitrillion-dollar infrastructure bill, this project needs to be shovel ready. The residents and small businesses of Hell’s Kitchen would benefit greatly from this station. Once elected to the City Council, I will fight tooth and nail to make this happen, but New York City and New York State need to get moving on this now.” 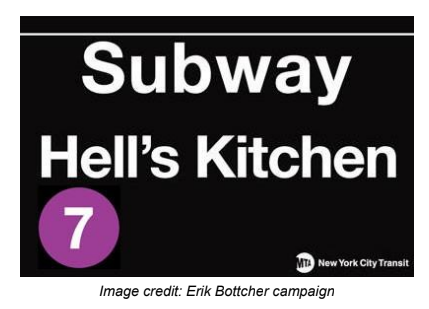 “This station was part of Hudson Yards plan,” said Christine Berthet, co-founder of the Clinton Hell’s Kitchen Chelsea Coalition for Pedestrian Safety (CHEKPEDS). “Since then the population has exploded in the area and the new Port Authority Terminal will bring a huge influx of travelers. It is time the M.T.A. and the city live up to their commitment and finish the station.”

The 10th Ave. station was first planned as part of the 7-line extension that was completed in 2014. The Hell’s Kitchen station’s construction was dropped in 2007 after the city, state and federal government failed to include funding for it in the initial project budget. Since then, numerous proposals for the area’s development have called for the forgotten station’s construction; some of these include direct access between the Port Authority and the proposed 10th Ave.-train station. Yet, the project continues to be stalled due to lack of funding.

Bottcher is calling on the city and state to fund a preliminary design and feasibility study, which would be required for federal consideration, to be part of Biden’s proposed infrastructure package. A change.org petition calling for the station was posted a few months ago.

Bottcher is also advocating for universal ADA accessibility at M.T.A. stations, a “rapid bus transit network” that is within a five-minute walk of all residents, and a protected bike lane on 10th Ave. Bottcher is also an endorsed candidate of StreetsPAC.

Two other candidates in the District 3 race, however, as reported by Streetsblog, were underwhelmed by Bottcher’s advocating for the mothballed subway station project. Arthur Schwartz said handicapped accessibility for subways, mainly elevators, is his number priority for the system, and jibed that Bottcher is finally focusing on transportation. Leslie Boghosian Murphy said Community Board 4 has been advocating for the 10th Ave. station for years and that it is “not a new idea nor fight.”