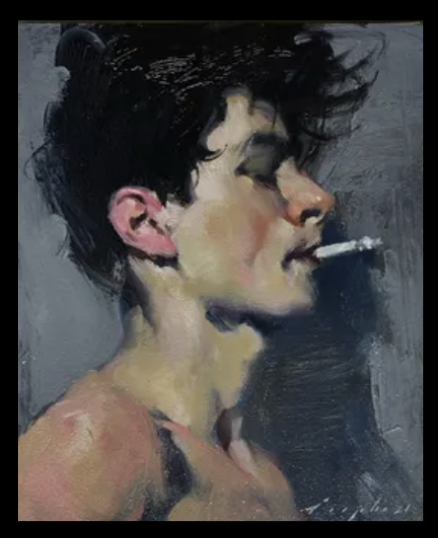 "Smoking Guy," by Malcolm Liepke, one of the paintings recently on display at Arcadia Contemporary.

Emotional art that ‘tells a story’ in Soho

BY H.D. WRIGHT | In the corner of Arcadia Contemporary, a gallery in Soho at 421 West Broadway, Steve Diamant, the place’s owner, reclines on a zebra-patterned chaise, deep in thought. Diamant is something of a secret: He sits in the back behind a pair of glasses and a sliding, gray glass door. In order to see him, you have to navigate past a maze of paintings, each more evocative than the last.

On one wall, visitors to the gallery encounter a dinosaur devouring the guts of a businessman. On the opposite, a family is shown in a dark field, gazing up at a large movie screen with an image from a “Star Wars” film. A crouching tiger, a vampiric teen and the ghostlike shell of a young girl are the protagonists in neighboring frames, creating a carnival of stories related only by proximity within the gallery’s walls.

I spoke with Diamant at length for this story, and I was lucky enough to hear his own as he reflected on his more than 34 years in the Soho art world. He is brilliant, enigmatic and very kind. One of the things I came to admire most about him is that the space he has created and its inventory represent an act of dissent — more about that later — yet he is so intelligent that he makes it appear effortless and natural.

Diamant beckons me to come in, explaining the distance in his eyes as he watches over the visitors in the gallery.

“I want people to be transported,” he says. “You find yourself looking at the work, and you make a connection that is so intellectually and emotionally strong — everything else just falls away.”

Tourists and collectors from around the world stop in every day to view the works on Arcadia’s walls, but one recent encounter stands out, in the gallerist’s mind.

“About three months ago, a middle-aged man stood for a while in front of a painting on the gallery’s wall, and he just started crying,” Diamant recounts.

Once he pulled himself together, the man told Diamant that the particular artwork he was viewing reminded him of his grandmother, who had been forced to flee her small European town on Kristallnacht, the Night of Broken Glass. She took a path through the forest to freedom, and never looked back.

“One of the paintings we were exhibiting at the time,” Diamant explains, “was that of a woman who was turning and looking at the viewer as she stood on the edge of a forest, about to enter both the forest and whatever lay ahead for her new life.”

Diamant doesn’t believe in coincidences, insisting, “This person was meant to have seen that painting.”

People come in and out, and pass the time absobring the stories on the wall. Despite the immutability of their frames, each painting, according to Diamant, “has the capacity to elicit so many different responses, each dependent on the history of the person who views it.”

Even before Diamant decided which paintings would inhabit the walls of the gallery, he knew what kind of work he wanted to show.

“The art that I love tells a story,” he says. “I know people who are absolutely happy with nothing in their rooms but the painting they bought, because they love it so much. They’re not buying work from this gallery because it’s going to look great over their sofa, or because the colors match the paint in the room where it will be placed. They’re buying it because they love this artist’s work, the story it tells, and this is the painting they’ve been waiting to bring into their lives.”

At the heart of Diamant’s philosophy and what he features at Arcadia Gallery is the belief that art “is not just a product.” Diamant doesn’t select artists based on how much revenue their work is exepected to fetch. He doesn’t join or exhibit trends to capitalize on the foot traffic they may generate.

“People should be buying artwork for emotional reasons,” he explains. “Not for any other reason. You feel something when you look at it, and its decorative purpose should be secondary.”

This dedication to skills and narrative permeates every inch of the space: the paintings on the walls, the black lacquer floors below them and, most important, the interactions that occur in between. Diamant ensures that every artist has time on the wall, even when their paintings don’t sell quickly. He holds onto unsold pieces for years if he believes in them and the stories they tell.

“It takes only one set of eyes to like a painting,” he notes.

It is his fundamental emphasis on people and their stories, the artists who create these works, and the comfort the artworks give to their buyers versus profit that separates Diamant from the impersonal luxury that permeates Soho. It is this practice, in fact, that renders what Diamant does even more valuable.

Rents are always rising — artists have been outrunning them since the golden days of Basquiat and Haring — and each year it becomes more challenging to champion the talent over the product.

“Every day there is pressure to change, to find art that will be more commercial in order to pay the exorbitant rents,” Diamant says. “But we will only feature what we feel passionate about.”

He insists that his philosophy is not special, noting, “This is just one person’s vision for what a business should be. Mine is to champion painters who tell a story, and ensure their works are seen by the collectors who want to bring them into their homes and lives.”