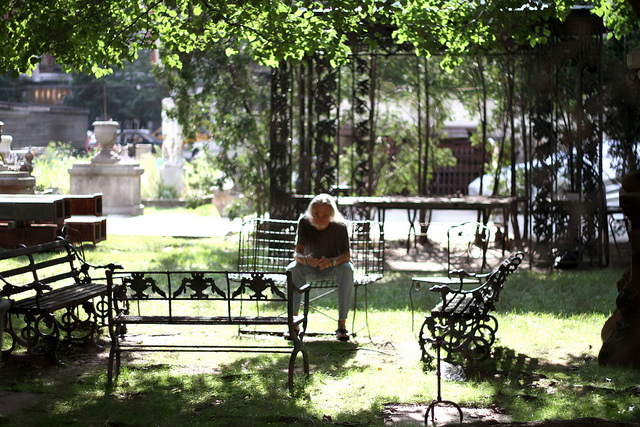 The late Allan Reiver sitting in the Elizabeth Street Garden, which he created in 1990. He personally planted the trees and used a forklift to position the garden's statues and architectural elements.

BY THE VILLAGE SUN | Elizabeth Street Garden members are not digging a sudden move by the city to dodge a lawsuit that would block the green space from being bulldozed for a new housing project.

The Little Italy gardeners accuse the de Blasio administration of trying to “circumvent the legal process.”

In short, at the 11th hour, as Elizabeth Street Garden’s litigation is still pending, the Department of Housing Preservation and Development has sent a notice to terminate the garden’s lease.

The unique, statue-festooned green space, which runs between Elizabeth and Mott Streets on the block bounded by Prince and Spring Streets, has been leased on a month to month basis from the city for more than 30 years. But H.P.D. has now sent a letter of termination saying that the garden’s lease will end this Oct. 31.

The garden was created in 1990 by Allan Reiver, who died this past May at age 78. His son, Joseph Reiver, currently is executive director of the nonprofit group that runs the space.

The gardeners’ lawyers, Norman Siegel and Elliott Meisel, wrote to Supreme Court Justice Debra A. James, on Sept. 20, objecting to the city’s latest maneuver. In their letter, the attorneys stressed stressed that, in prior negotiations between the parties during the lawsuit proceedings, the city had agreed not to take any action on the garden until “after the filing of a final decision” in the case, and to provide 30 days’ notice before doing so.

However, the judge has not issued a ruling on the suit yet.

“If the lease is terminated, of course, use and possession of the Garden will revert to the City, which has said repeatedly in public, including in Court papers, that it intends to destroy the Garden in its current form,” Siegel and Meisel wrote in their letter to James. “The very question in the [lawsuit] pending before Your Honor is whether the city can legally do so. The City is attempting to achieve through lease termination what it has not yet achieved through litigation.”

In an e-mail alert, Elizabeth Street Garden said it will “vigorously oppose this unseemly action.” The nonprofit is demanding that H.P.D. “respect the existing stipulation” and rescind the eviction notice until the court renders a final decision.

Meanwhile, the garden group is putting out an “emergency call to action,” which will include holding a rally in the garden on Sun., Sept. 26, at noon.

They are also asking gardeners and garden supporters to send a prewritten e-mail letter by the group to local politicians and H.P.D., demanding that the agency rescind the eviction notice.

The housing project, known as Haven Green, that is slated for the garden is opposed by Community Board 2 and almost all of the area’s local politicians, who support saving the existing green space. The housing project’s main backers are Councilmember Margaret Chin and Mayor de Blasio, who will both be term-limited out of office in a little more than three months’ time.

C.B. 2 has identified another city-owned site, a vacant lot at Hudson and Clarkson Streets, where it says more than five times as much affordable housing could be built compared to the Little Italy location. However, despite the overwhelming opposition, City Hall, so far, has stonewalled the community and refused to consider moving the project to the alternative site.

Christopher Marte, the Democratic nominee for Lower Manhattan’s First Council District, who would succeed Chin if he is elected in November, supports saving the garden.