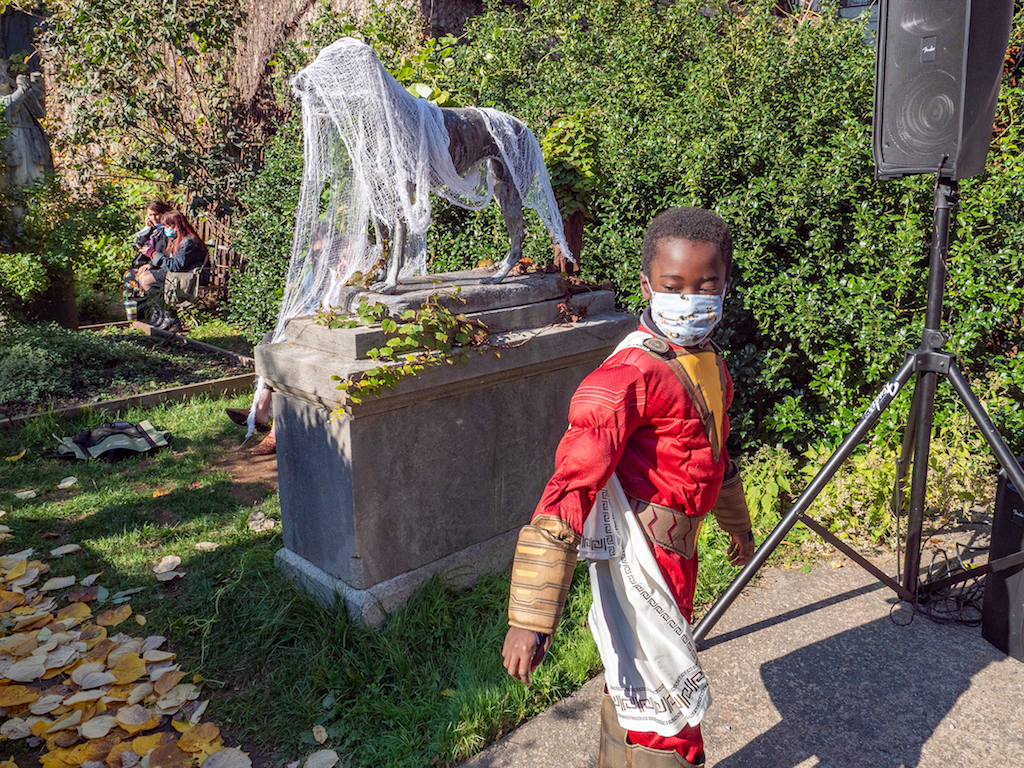 Elizabeth St. Garden case is fight for ‘heart and soul of neighborhood’

BY THE VILLAGE SUN | It wasn’t exactly your “garden variety” court hearing. This one had lawsuits filed by two separate groups and more lawyers than a Trump 2020 election challenge.

The goal of the plaintiffs on each suit was the same, though: to save the Elizabeth St. Garden.

There were at least seven attorneys on the screen, variously representing the two garden groups and the city, plus all the parties involved in Haven Green, a city-sponsored housing project slated for the Little Italy garden. The development plan — on a through lot between Elizabeth and Mott Sts. — calls for 123 units of housing to be built for low- to extremely low-income seniors, with some units set aside for formerly homeless seniors.

The two garden groups have agreed to work together, though they have filed separate suits. James counseled their attorneys at the hearing’s outset to try not to try not to repeat the same arguments.

Representing Elizabeth St. Garden Inc., civil-rights attorney Norman Siegel contended that the Haven Green project would violate the Special Little Italy District a.k.a. SLID, which requires building walls not to be set back but to extend all the way out to the front lot line. While Haven Green’s front wall would extend to the sidewalk lot line on Elizabeth St., its rear wall would be set back 60 feet from Mott St., so would violate the SLID zoning, he argued.

In addition, Siegel said, the city’s Department of Housing Preservation and Development, the lead agency on the project, only conducted an environmental assessment, not a more comprehensive environmental impact statement, or E.I.S., as should have been done under a City Environmental Quality Review, or CEQR. In turn, an E.I.S., he pointed out, would have required a study of alternate sites. Community Board 2, for example, has identified a city-owned site at Hudson and Clarkson Sts. that could support an estimated five times as much affordable housing as the garden.

An E.I.S., unlike an environmental assessment, Siegel added, also requires a public review of the project.

The attorney continued that while Elizabeth St. Garden is small, its impact on the surrounding community is oversized.

“Getting rid of this would set a precedent,” he warned. “It really is part of the community. It’s not a vacant lot. It’s not a commercial sculpture garden. It is really special. Elizabeth St. Garden is rare. It’s sui generis,” he said, using the Latin term for “unique.” “It is the heart and soul of the neighborhood.”

Allan Reiver turned the formerly vacant lot into a garden in 1991, and — making it sui generis — filled it with monuments. He lives next door in a former firehouse and continues to rent the garden space from the city on a monthly basis. His son Joseph Reiver is the executive director of E.S.G. Inc., which, of the two garden groups, is the one that currently runs the garden.

Siegel concluded by inviting the judge and all the attorneys to come visit the green oasis and appreciate it for themselves.

“Certainly, I will,” James responded.

If, in fact, she does, she would one up Mayor de Blasio, who promised to visit the garden but never made good on his word. De Blasio and Councilmember Margaret Chin, a longtime affordable housing advocate, are the main forces pushing the Haven Green project.

Also representing E.S.G. Inc. at the virtual hearing along with Siegel was attorney Elliot Meisel. He noted that when the Haven Green project was first announced in 2012, it came without any prior input from Community Board 2, which had not even been notified about the project.

“It was foisted off on Community Board 2 without its knowledge and then it sat there as a time bomb until now,” Meisel stated of Haven Green.

He pointed the finger at Chin for trying to ram the project through.

“[It’s] just a whitewash of one politician’s personal desire to have this project done and everyone falling into line behind her,” he scoffed.

The attorney further touted the garden as “a site-specific integrated piece of art,” arguing that it is thus probably protected under the Visual Artists Rights Act (VARA) of 1990.

Attorney Michael Gruen, representing the Friends group, also gave remarks. The Friends were the ones who — after the housing plan was announced — first identified that the garden was actually on city-owned land. They then worked to open up the space to the public and program it with activities.

Attorney Nathan Taylor, representing the de Blasio administration, opened his remarks by stressing, “This is really about the seniors.”

“The number of New Yorkers 65 and over living in grinding poverty has increased 16 percent over the last decade,” he said.

The city attorney attacked Siegel’s SLID argument, contending, “The rear of the building does not become a front wall [just] because it faces…the opposite street.”

Taylor also maintained that Haven Green — which would preserve a slice of green along Mott St. — would actually provide more open space to the public than the garden does currently. He charged that the Elizabeth St. Garden is too frequently locked and that the Haven Green space would be open more often.

“The site is not serving the community as well as it could, and this project would change a lot of that,” he claimed.

“A garden that’s open a few hours a day, that’s been open since 2013, cannot be called ‘a defining feature of Little Italy and Soho,'” he said, dismissively.

However, Justice James queried Taylor on whether the far smaller open space in Haven Green would be able to host movies and music, as the Elizabeth St. Garden does. He did not clearly answer the question.

Also attending the virtual hearing, but not speaking this time, were attorneys for Habitat for Humanity, RiseBoro Community Partnership Inc. and Pennrose LLC, which are all involved with the Haven Green project.