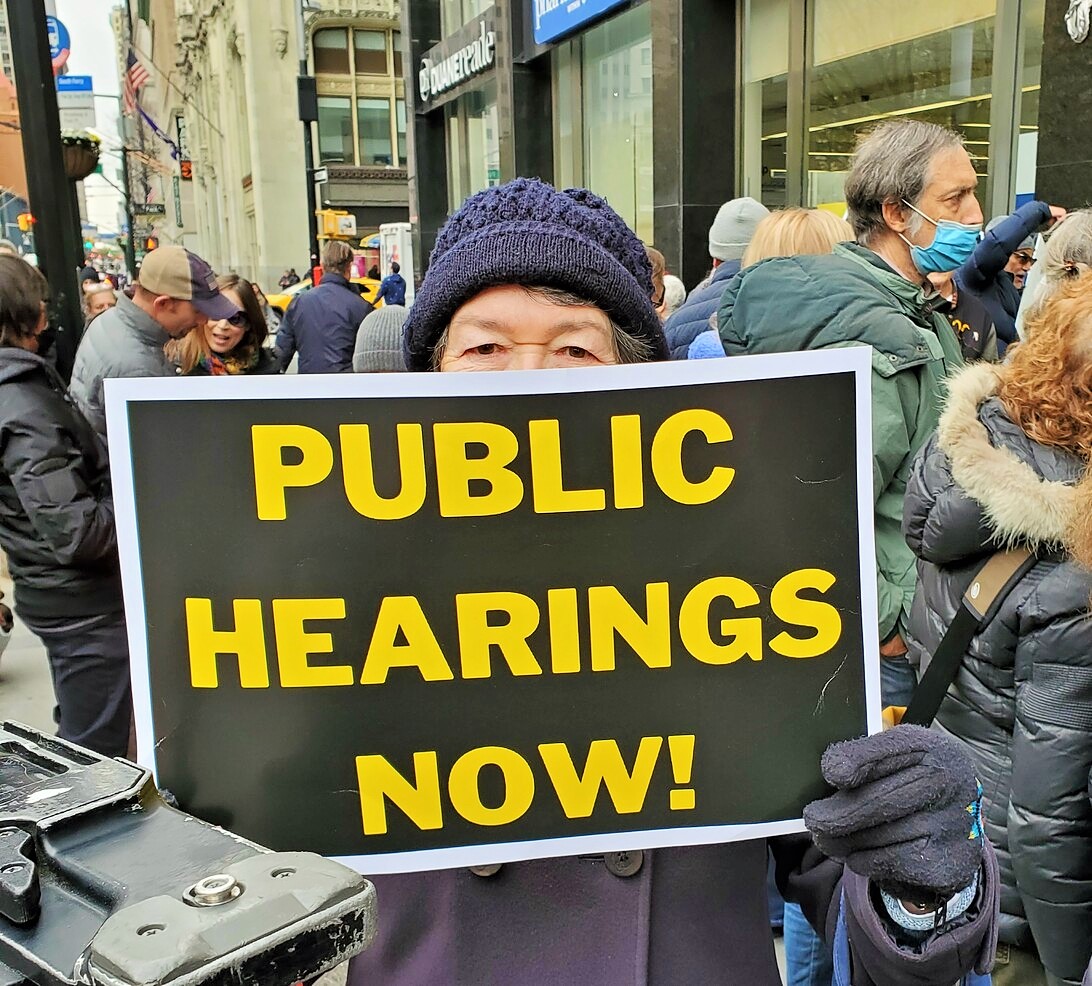 At a protest outside the City Council's offices in November, Greenwich Village resident Nancy Pasley called for public hearings on the pending Open Restaurants bill. (Photo by The Village Sun)

One of the top stories in The Village Sun has been the ongoing debate over the city’s outdoor dining program, Open Restaurants. It’s clearly a pressing concern for readers who live in nightlife-heavy areas with narrow streets overlaid with commercial uses, like Greenwich Village, the East Village and Lower East Side.

Some of the founding members of CUEUP — the ad hoc group that is a top critic of the roadway dining sheds — are from Downtown Manhattan, including West Village Residents Association and Lower East Side Dwellers. Not surprising, since of the city’s more than 12,000 dining sheds, more than 3,000 — or one-quarter — are packed into Manhattan’s Community Boards 1, 2 and 3, which together include all of Downtown.

In short, the flood of sheds is not something that has “no effect,” per City Hall. The scheme needs to be reviewed via a full environmental impact study, looking at noise, traffic, sidewalk access, rats, fire safety.

Justice Frank Nervo agreed, backing a lawsuit by anti-shedders demanding an E.I.S. A second suit seeking the structures’ removal ASAP was deemed “not ripe” by another judge, who felt the challenge should wait until after the City Council O.K.’s legislation making the pandemic program permanent.

Meanwhile, shed foes demand a public hearing on the bill — and rightly so. A nine-hour hearing was held last February, at which the Department of Transportation said the sheds would be scrapped by 2023 in favor of umbrellas or tents. But more recently we heard operators might get more time for shack removal, which is a no-go for shed-shocked (as in, shell-shocked) residents. Basically, much has changed; a hearing is needed.

New York magazine, in an Oct. 24 article on outdoor dining, noted, “The hyperlocal press has squared off. Community newspaper The Village Sun is fully anti-shed, while the transit-focused Streetsblog sees the structures as a promising front in the war on King Car….”

Honestly, we simply have been doing what we always try to do: amplify the voice of the community on important local issues. Yes, unquestionably, Open Restaurants has been a boon for the city’s hospitality industry. And yet, restaurants opening now, post-pandemic, still can double their seating capacity with roadway sheds. Meanwhile, other businesses — bookstores, shoe stores, hardware shops — can’t similarly increase their space for free.

In a Nov. 22 op-ed in Streetsblog (whom we have allegedly “squared off” against), Councilmember Carlina Rivera, whose district includes the East Village and Lower East Side, called for a public hearing on the permanent Open Restaurants legislation.

“The City Council should hold a fair hearing to give the public the opportunity to weigh in on the future of the program, in a way that maximizes its potential for businesses and protects the quality of life of residents,” she wrote. She added that lack of enforcement has led to “excessive garbage and pests, narrowed sidewalks and noise late into the night.”

Rivera said she’d like the roadside seating to be year-round, “where possible.” However, we previously heard from a Council source that the whole program would transition to being seasonal. So, again, here is an issue that could — and should — be discussed and clarified at a public hearing.

Meanwhile, Allie Ryan, who is running for election against Rivera this year, proposes a public referendum. YIMBYs will barrage you with polls and studies showing most New Yorkers allegedly back Open Restaurants. Well, let’s see if those polls are accurate. It’s certainly a big enough issue, and there’s more than enough time to put a question about it on the ballot.

Taxpaying New Yorkers deserve a chance to determine the direction of their city, too — not just a few dozen councilmembers and the New York Hospitality Alliance.

Hold both a hearing and a referendum.