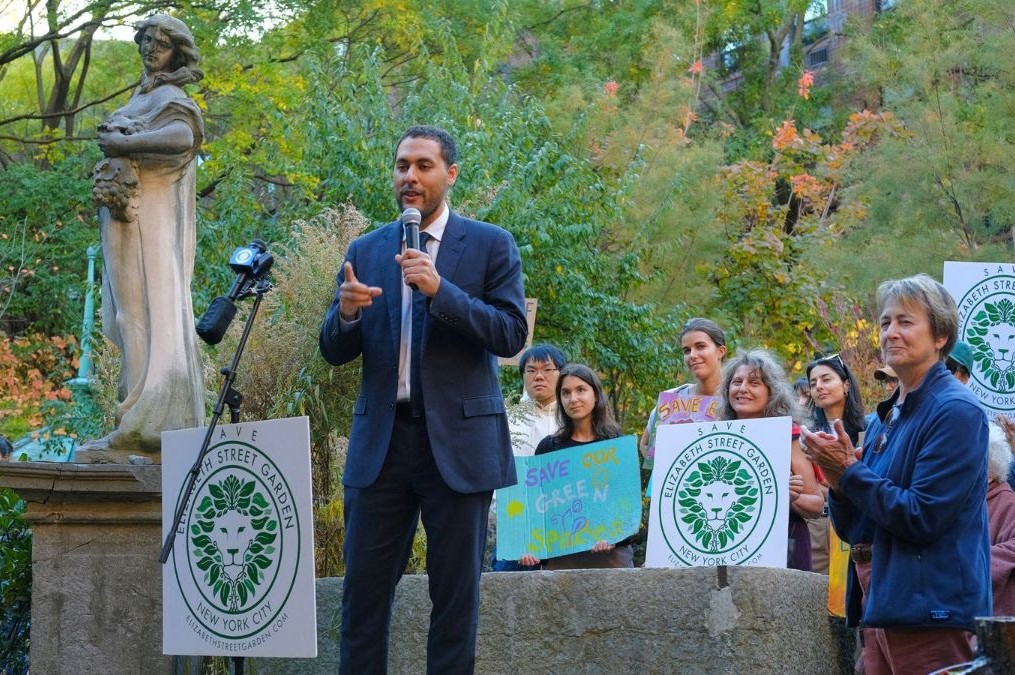 Editorial: Now’s the time to save the Elizabeth Street Garden

State Supreme Court Justice Debra A. James has ruled that the negative declaration New York City issued three years ago on the need for an environmental impact study for a housing project at the Elizabeth Street Garden is “vacated and annulled.”

This is great, welcome news — and long overdue. The Elizabeth Street Garden group and its supporters — including, notably, Community Board 2 and the area’s politicians — have maintained all along that the loss of the Little Italy refuge — 20,000 square feet of gorgeous, landscaped green space, with engaging, well-curated programming — would profoundly impact the community.

In short, this part of Downtown Manhattan is sorely underserved in terms of open green space — and that is one reason why the impact of the garden’s potential loss must be studied fully and exhaustively, as required by environmental law.

With this decision, the plaintiffs now hope Mayor Adams and Adolfo Carrion, the commissioner of the Department of Housing Preservation and Development, will meet with them, so the issue can be resolved in a way that both preserves the garden, yet also achieves even more affordable housing at existing alternative sites — including 388 Hudson St. — sites identified primarily by C.B. 2.

Under the city’s Haven Green plan, a seven-story building with just 123 units of affordable senior housing would be constructed on the garden. Yet, shifting the project to the cityowned lot at Hudson and Clarkson Streets — a site that must remain partially open, so the Department of Environmental Protection can access a water shaft that connects to the Third City Water Tunnel — could mean creating 350 to 500 affordable units, or three to four times what Elizabeth Street could support. The city has already said it will build some housing at Hudson Street, but the site can clearly take much more.

Another identified alternative site is the federally owned garage on Howard St. We hear Councilmember Christopher Marte — who strongly supports the garden — may soon announce another potential site in his District 1.

The well-funded garden also has a proposal to run the space as a conservation land trust in perpetuity — at zero cost to the city.

Basically, James’s decision is now a chance for a “reset.” Haven Green’s two staunchest supporters, Mayor de Blasio and Councilmember Margaret Chin, are now both out of office due to term limits.

Let’s not forget the highly improper and stealth manner in which the project was originally snuck in  — with Community Board 2 only receiving an after-the-fact notification that the garden had already been designated for destruction.

In September, the garden held a benefit concert for Christina Yuna Lee, the 35-year-old woman who was brutally killed in her Chrystie Street apartment this past February in a crime that horrified New Yorkers.

“Christina believed in the power of green and open spaces as opportunities for self-realization and exploration,” the fund’s page says. “Elizabeth Street Garden was one of her favorite places in New York — she often went there to read, sketch, listen to music and hear poetry. It was her personal oasis in the middle of the city.”

That sums up exactly how many feel about this unique place.

Yes, the expected thing would be for the city to appeal this latest ruling. However, Mr. Mayor, you appreciate beauty, community, positivity, the importance of green open space. We all know there’s a better solution. Be the one to make it happen — in a win-win for everyone.