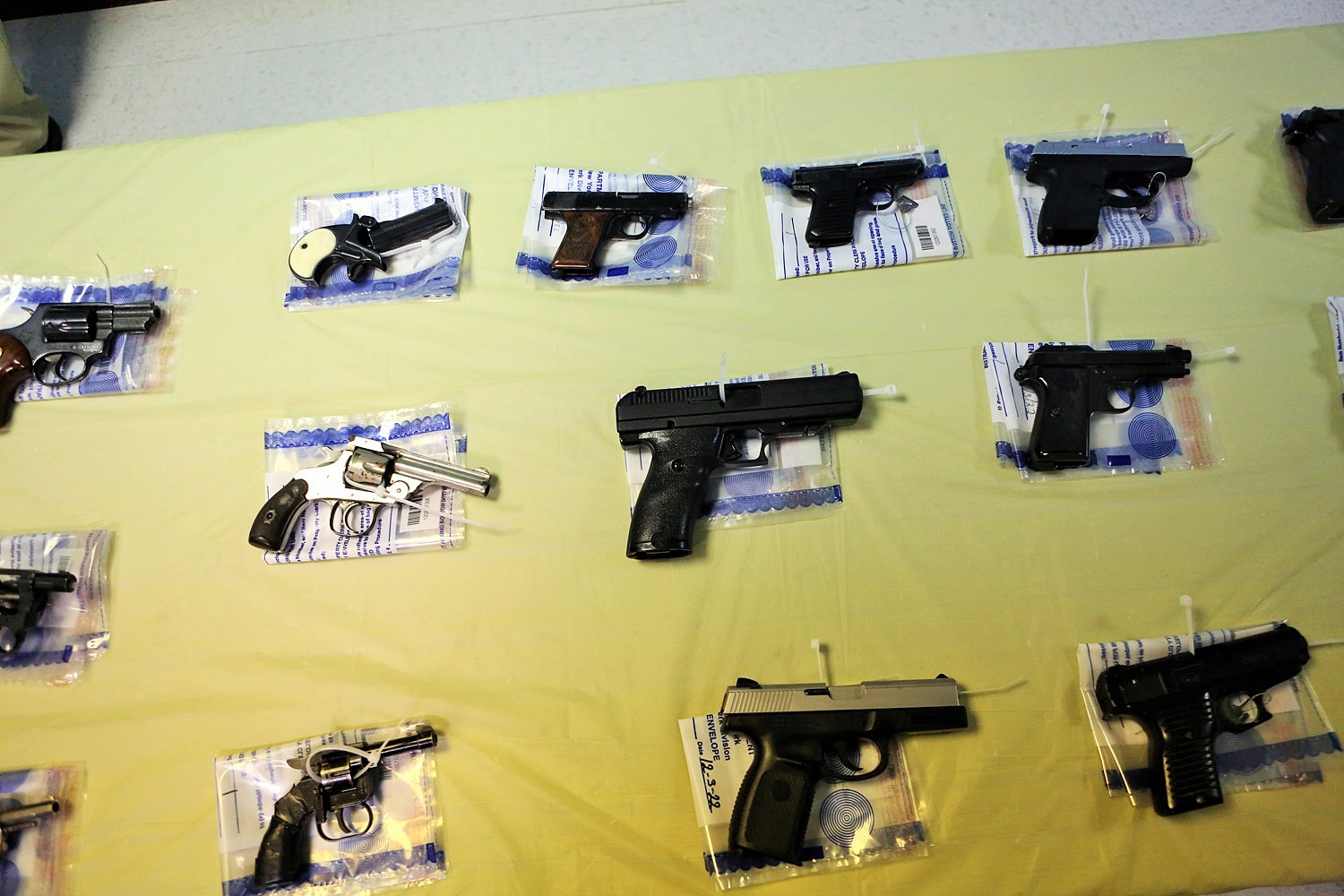 Some of the guns that were turned in. (Photo by © Jefferson Siegel)

BY JEFFERSON SIEGEL | Crime in New York City is either up or down, depending on which statistics you examine.

From last September to this September, shooting incidents were down 13.2 percent, according to the police, while overall crime increased by 15.2 percent during the same period.

For years, police have tried to reduce gun crimes by reducing the number of guns in the city with a buyback program. A walk-in buyback program, the third in Manhattan this year, took place on Saturday at the Gethsemane Garden Baptist Church, on E. Seventh Street in the East Village. Earlier Manhattan buybacks took place in Inwood and Harlem.

For six hours, police took weapons in exchange for both a $200 gift card and an iPad, with no questions asked. By the end of the day, 16 guns, all in working order, had been recovered. They included 10 semi-automatics, five revolvers and one derringer. Including Saturday’s take, a total of 136 firearms have been voluntarily turned in this year in Manhattan alone.

At the end of the buyback event, several local elected officials spoke of the urgency of getting guns off the streets as they stood in front of a table covered with unloaded guns.

“Getting a gun off the street is potentially a life saved,” said Alvin Bragg, the Manhattan district attorney.

The D.A. also expressed concern about defaced, or ghost, guns.

“A semi-automatic weapon where someone has taken the time and energy to deface it,” he said, “those are the kinds of guns we’re seeing at crime scenes that are used in connection with homicides and robberies.”

Calling gun buybacks a big piece of the puzzle to lower crime, Bragg noted that, this year to date, homicides and shootings are down both citywide and in Manhattan.

“We are doing gun-trafficking investigations, our gun prosecutions, as a general matter, are up,” he said.

“Earlier this year, also on the Lower East Side, we announced a series of grants that we did with community-based organizations,” he added. “We were at the Henry Street Settlement for that. We want to be on the prevention side. We want to be working with our community partners, and that’s essential for public safety.”

Assemblymember Harvey Epstein emphasized the need for such cooperation.

“We need critical messengers in communities,” he said. “Unfortunately, this neighborhood is one of the top seven communities in the state that’s sending people to prisons. If we can do more preventative work, like we’re talking about, get more guns off the street, like we’re doing today, we can really affect crime in our city and our state.”

“I can’t imagine a more important effort than this, making certain that guns, illegal and otherwise, get off our streets,” state Senator Brad Hoylman said.

Hoylman sponsored legislation that was signed into law banning the sale and possession of ghost guns.

“We were one of the first states in the country to take that step,” he said. “I’m glad that the federal government has followed suit with an executive order.”

People who want to turn in guns can do it anytime. All one needs to do is put the unloaded firearm in a black bag, go to any precinct, and turn it in at the desk, for which a gift card will be awarded in return. Again — no questions asked. Recovered guns are then destroyed.