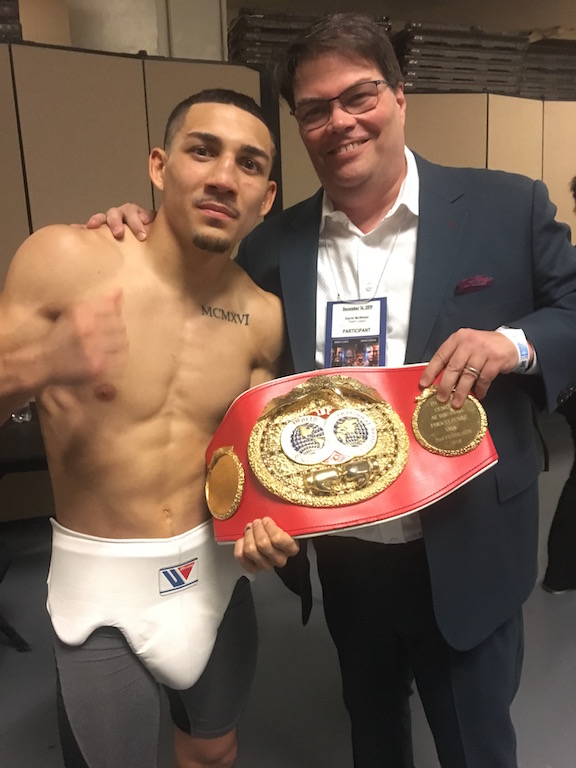 David McWater, right, with Teofimo Lopez in December 2019 after the boxer won the I.B.F. title in a second-round knockout at Madison Square Garden. (Courtesy David McWater)

BY LINCOLN ANDERSON | Things could not be looking any bleaker for small businesses amid the crippling global coronavirus pandemic.

A former chairperson of Community Board 3 who built a mini-empire of East Village bars, David McWater recently spoke with The Village Sun, sharing his thoughts about the plague’s incalculable impact on mom-and-pop merchants and nightlife.

The paper spoke to McWater one week after the governor and mayor ordered bars and restaurants closed to help stop the virus’s spread, and one day after all nonessential businesses similarly were ordered closed.

McWater, now in his mid-50s, chaired the East Village / Lower East Side community board from 2004 to 2008 before resigning from C.B. 3 in 2013. While he once owned even more bars, he currently has four: Doc Holliday’s, Milano’s, d.b.a. and The Library.

Though pubs and restaurants have been closed to patrons, they can still sell alcohol and food for takeout and delivery.

“I don’t think we are going to do delivery,” McWater said. “The risk seems to way outweigh the reward.”

He had mulled maybe offering beer and “packaged food” for takeout and delivery, but decided against it.

There looked to be little profit in it, he said, adding the regulations are unclear, such as whether a patron can even step one foot inside a bar to “come in to get a cocktail.”

But the details on takeout appletinis are a small issue. The real concern, of course, is the bigger, long-term picture.

“I hope it doesn’t break me,” he said of the effect of COVID-19 on the local economy. “It’s going to be really hard on storefronts of all businesses. Everyone’s closed, not just me.

“We’re lucky, we have resources that new people and younger people don’t have,” the veteran small businessman said.

Specifically, McWater said, the city and state will have to help by providing real estate tax benefits to landlords, who will then, in turn, abate merchants’ rent.

“If they don’t get some kind of rent abatement, it could be 90 percent gone at four months,” he said of area small businesses.

A major concern of his is that, once the virus is brought under control and things start returning to normal, large chains and wealthy entrepreneurs will just swoop in and scoop up the storefronts of struggling bars and restaurants. These operators would then try to apply for new liquor licenses or license transfers.

“They should put a two-year moratorium on liquor licenses,” McWater declared. Otherwise, he said, “The landlords would just go to the people with the most money. And all of a sudden, you’ve got Applebee’s and TGI Friday’s.

“I think what we all want to avoid is a bidding war for the storefronts,” he warned. “Whether you like your local bar or restaurant or bookstore, whatever it is — or whether you want the corporate version there — you better start thinking about that.

“I think for a neighborhood like ours, it’s just a horrible look,” he said of the so-called “formula retail” stores. “Already we got the goddamn 7-Eleven. Now [if] you got Applebee’s, TGI Fridays, you got the same s—ty restaurants you got everywhere in America.”

The $2-trillion stimulus bill passed in Washington last week provides more than two months’ worth of “forgivable loans” — grants, basically — for small businesses to pay for workers and operating expenses, including rent, mortgages and utilities.

Still, that might not be enough to fully cushion the blow for small merchants.

“It offers 10 weeks, but no more than 25 percent can be spent on things other than payroll,” McWater noted of the relief package. “So it’s really awesome for companies with lots of payroll, but most storefront businesses — mom-and-pops — don’t have a lot of payroll, they have a lot of rent, at least in New York City. I’m thankful for it, but I don’t think it will save many businesses in New York City. The stimulus bill mostly seems for the fat cats.”

However, risk comes with the territory for small entrepreneurs, according to the bar owner.

“Let’s say this goes on for four months,” he speculated. “Basically, anyone who’s got a storefront has given themselves a bad job. They do it because they love it. Most of ’em are living week to week, scrambling to get by.

“You show me the guy in a storefront that makes a ton of money. A lot of people, they open a bar or a bookstore because it’s their dream.

“When they started talking about eight weeks [staying] at home,” he said of the New York State on Pause plan, “no storefront survives that without some type of remediation. They’re basically laid off and they got all these bills,” he said of the merchants.

As for where he personally is staying at home right now, McWater is at his house in New Jersey, which he said is more spacious for hunkering down than his 900-square-foot apartment in the East Village. Normally, he’s in the East Village two to three times a week, he said. Back in 2013, the fact that he was living in Jersey became an issue for C.B. 3, helping prompt his resignation from the board.

McWater, who once aspired to hold political office, praised the work of Assemblymember Harvey Epstein during the current crisis, noting Epstein has been pushing for rent abatements for storefronts.

He recalled that Epstein and he often sparred over points of the East Side / Lower East Side rezoning in 2008, but that, in the end, Epstein was one of his staunchest allies in pushing the plan through.

Originally from Oklahoma, McWater started his first bar while a college student at New York University.

“I’ve always been in business for myself,” he said. “Being a small businessman, it’s a genetic disorder. I had it, and all of those other people do. I like building things. Whether it’s on the community board, the Little League, boxing.”

Always interested in sports, McWater built up the Lower East Side Gauchos into a Little League powerhouse, and after leaving the community board, he launched a second career as a professional boxing manager.

Back when McWater first got into owning bars, the neighborhood — and the business — was different.

“I knew the bars,” he recalled. “I spent so much time in them. I understood the business part of it. Half the bars back then — this was the ’80s — were doing cocaine and f—ing up. Today, it’s much more professional.

“It was an industry that was very weak. If you showed up and stayed sober, you were in the top 1 percent,” he shrugged. “Now all the restaurant guys are coming out of good schools.

“If I were 22 today, I would pick something less competitive,” he reflected. “Back then, down here it was just screwups.

“Back then, all of us were just winging it. But these kids now, they know what they’re doing.”

McWater noted that from 2008 to 2012, he sold 13 bars. He started to see the kind of financing that was coming into the industry.

In one place he unloaded, he recalled, “They were putting more money in for renovations than I sold it for.”

In fact, the former C.B. 3 chairperson said that, well before the pandemic, he had already handed off the operation of his East Village bars to someone else.

McWater is now mainly focusing his energies on boxing with his Split-T Management company. However, of course, coronavirus has canceled all sporting events, too.

“I had the entire Showtime card on April 10,” McWater said, wistfully. “May 30, I had my first pay-per-view fight at the Garden — Teofimo Lopez and Vassily Lomachenko.”

Lopez is McWater’s prized protégé and he sees a bright future for the talented lightweight.

“Teofimo, he’s got a chance to be one of the greatest of all time,” he said. “If he wins the Lomachenko fight, he will be the youngest person to unify all four belts.”

McWater actually took a crack at early retirement in 2012, but basically found himself just vegging out on his couch. So the self-starter businessman jumped back into the ring.

Yet, more than that, he’s fearful about the real toll on human lives that the virus will take.

“I have no idea how long this will last,” he said. “And although I enjoy being successful, I have to admit how it affects nightlife is a secondary concern long term. I’m worried that the administration is still way too optimistic and that this thing may kill five or 10 times as many as they are saying.

“I think once it hits the hinterlands and the South, it’s going to spread like you wouldn’t believe, which is sad and appalling at the same time.”