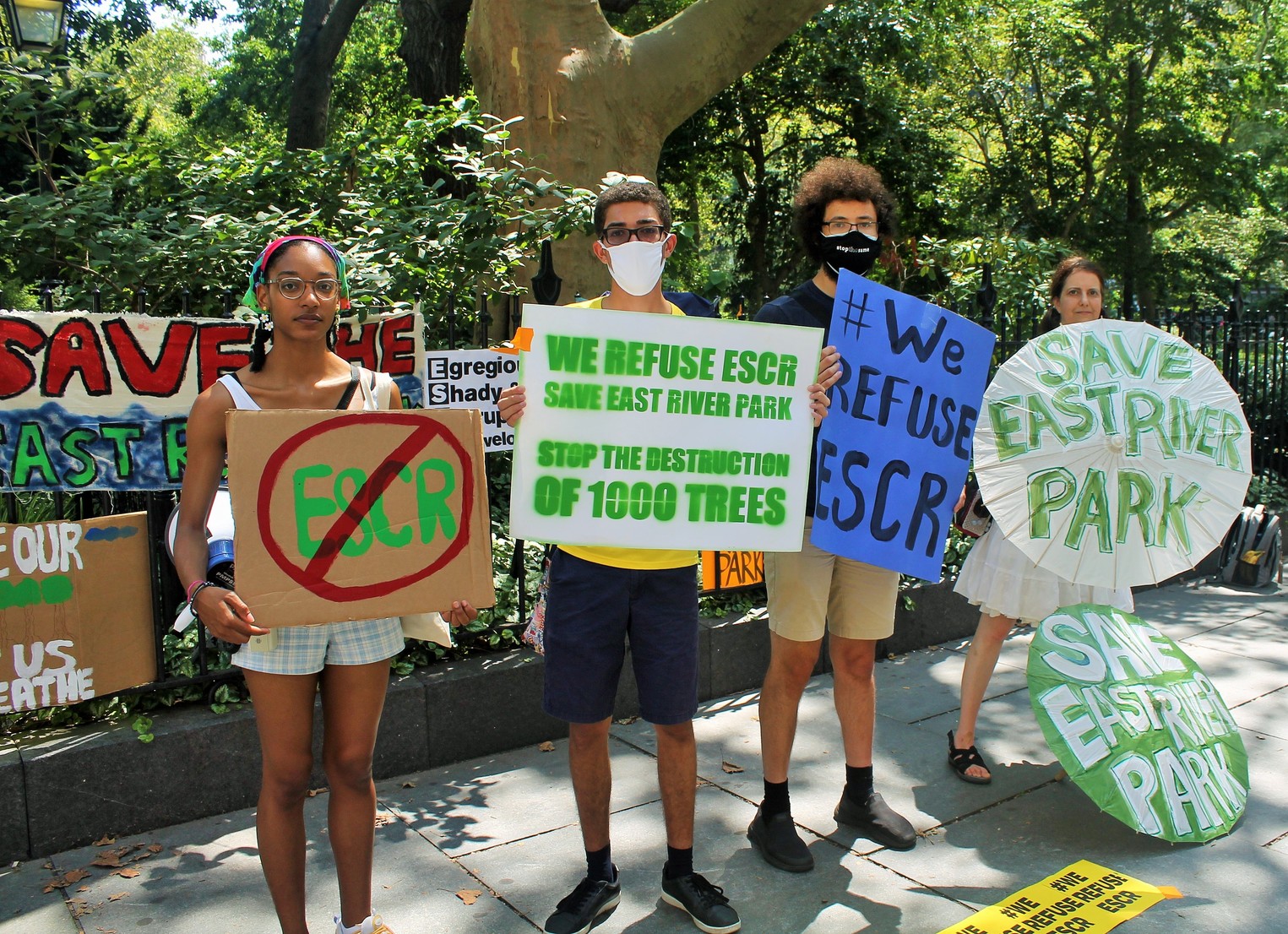 It was the culmination of a weeklong series of midday protests along Broadway outside City Hall to raise awareness of opposition to a planned $1.3 billion megaproject to bury East River Park and raise it up to 10 feet. The scheme would transform the park into a massive levee to protect the East Village and Lower East Side from coastal flooding as happened in 2012 during Sandy.

In addition to the barbecue, the protesters have something else hopefully cooking, too. Namely, they are pushing for an emergency City Council hearing on the East Side Coastal Resiliency project. They say that Justin Brannan, the chairperson of the Council’s Committee on Resiliency and Waterfronts, and James Gennaro, the chairperson of the Council’s Committee on Environmental Protection, have signaled their support for holding the hearing. The two politicians have reportedly reached out to City Council Speaker Corey Johnson and are awaiting his response.

After Thursday’s rally, two of the activists, Fannie Ip and Emily Johnson, went to personally hand-deliver a letter to Gennaro asking him to hold the hearing on the park plan. They had e-mailed it to him a week earlier and had not heard back. But after hand-delivering the letter, they subsequently found out that Gennaro, the day before, in fact, had agreed to try to hold the hearing. The week before, the park activists had met with Brannan, who reportedly told them he was on board with holding the hearing.

From the resurgence of COVID with the dangerous Delta variant — heightening the need for open space in the densely packed city — to lingering questions about the heavily redacted Value Engineering Study for the park plan, the opponents argue there are mounting reasons to hold an emergency hearing right now to reassess the project.

“In the current plan, the E.S.C.R. project will demolish the entire East River Park, including nearly 1,000 mature trees, the invaluable lungs and air conditioning for the whole area,” their letter to Gennaro said, in part. “This will contribute copious amounts of greenhouse gas, raise the heat index and harm air quality — in an area with already high asthma rates. The [park’s] 46 acres will then be raised 8 feet with almost a million tons of fill, ultimately rebuilding a ‘low maintenance’ park on top of it. The fill itself is a source of concern and will add particulate matter to the air. Furthermore, E.S.C.R. will destroy so much of the natural flood barrier of the area, it will become a national disaster issue if another Sandy hits before work is completed and interim flood protection continues to be denied. The Value Engineering Study justifying the current E.S.C.R. plan [comparing it to an earlier version of the plan] was hidden from the public for years — until Freedom of Information Law requests we submitted forced the Department of Design and Construction to release a redacted version. … ”

In addition, the activists have also been trying to meet with Councilmember Carlina Rivera, a staunch E.S.C.R. supporter, to talk about their concerns about the project. A month ago, Johnson a dancer, Yup’ik Nation member and self-described land and water protector, co-organized a “Cocktails With Carlina” rally outside Rivera’s new home in Kips Bay.

As for the grill at Friday’s rally, the idea protesters were trying to evoke was pretty clear — as in, where will people go to barbecue, enjoy other outdoor park activities and generally be outside for the next five years or more if East River Park is being totally demolished and rebuilt? Maybe, they said, they will just have to go to City Hall Park and barbecue there.

Comptroller Scott Stringer recently refused to sign the contract for a resiliency firm to do the work and sent it back to the Department of Design and Construction. He questioned, among other things, D.D.C. saying that the project only needs to have 16 percent Minority- and/or Women-owned Business Enterprise (M/WBE) hiring, as oppose to the city’s normal standard of 30 percent.

But last week, in a blow to the opponents, Mayor de Blasio overrode Stringer and the city went ahead and registered the contract. East River Park activists now fear that the city could start clear-cutting the park’s 1,000 mature trees as soon as September.

A so-called “notice to proceed” apparently is also required, however, and it was not immediately clear if one has been issued.

In 1939, when East River Park opened, F.D.R. was president, World War II had started, “Gone With the Wind” and “The Wizard of Oz” premiered and Lou Gehrig retired from baseball due to ALS. As for those mature trees in East River Park, in some cases, they took the park’s full 82 years to grow to their current height and provide a much-valued shade canopy. But the historic green oasis would all be wiped away if the E.S.C.R. project, as currently construed, goes forward.

Per the Parks Department’s page on East River Park: “The park was designed in the 1930s, in tandem with the Franklin D. Roosevelt Drive (also known as East River Drive.) [Then-Parks Commissioner Robert] Moses knew that the highway would pass through the Lower East Side, a neighborhood sorely in need of parkland. He envisioned a tree-shaded esplanade alongside the highway with abundant recreational facilities and windswept views of the East River and beyond. The acquisition of land for a park in this densely populated area was prohibitively expensive and fraught with legal difficulties, especially along this heavily industrialized waterfront. The Parks commissioner arrived at an imaginative solution. The combination of landfill and Moses’ energetic legal wrangling was enough to secure the needed parkland. In 1939, East River Park — the Lower East Side’s largest open space — opened alongside the F.D.R. Drive.”

Joining the protesters Thursday outside City Hall were a group of young environmental activists, including some from the youth-led Sunrise Movement.

“I feel like this issue encompasses many problems that we have in this city,” said Cameron Jones, 17, regarding E.S.C.R. “Like the fact that it would be in front of a NYCHA [public housing] development. These trees are an air cleaner. This area has  ongoing issues with air quality. They say it’ll take five years,” he said of the park-raising project. “But we know, with the city, it’ll take upwards of 10 years. And with no flood protection during the construction, it could be a disaster.”

Katherine De La Cruz, 23, spoke for an earlier version of the resiliency plan, which would not raise the park but would instead just build a berm alongside the F.D.R. Drive.

“It was a more resilient plan,” she said. “It basically made the park like a sponge, with the water coming in and out.”

Jones added that all the design renderings of the coastal-resiliency project show a future East River Park filled with tall trees and lush green lawns — but that it would take decades for the new trees to look like that.

“That’s the end of shade,” said De La Cruz, who, like Jones, is from Brooklyn. “You’re removing one of the only places where you can sit down and get some shade, get some breeze. We don’t have cabins Upstate. I spend all my time in Prospect Park. I touched moss for the first time this year, in Maine. They would never do this to Central Park.”

“As I rode on the subway, I saw there is a dangerous heat advisory today with temperatures expected of up to 107 degrees,” he said. “Where are people supposed to go?”

After returning from hand-delivering the letter to Gennaro, Johnson explained why she views E.S.C.R. as “a capitalist, imperialist plan.”

“Instead of getting rid of the F.D.R., by decking over the F.D.R., it’s bulldozing that much land,” she said. “It’s further erasing sacred sites, sacred Lenape sites, to remove community from the park. If this plan goes through, who in 30 years is going to be documenting how many deaths this caused? That’s capitalism. That’s imperialism.”

East Villager Elissa Jiji was skeptical the coastal resiliency project would get completed, which could lead to a scenario like Brooklyn Bridge Park, with housing ultimately being added to the waterfront park.

“It took 10 years to do the esplanade — just the esplanade,” she recalled, referring to the repairs of East River Park’s crumbling riverside pathway in the 2000s. “When they run out of money and can’t get this done, who’s going to come in? Who has the money? Developers!”