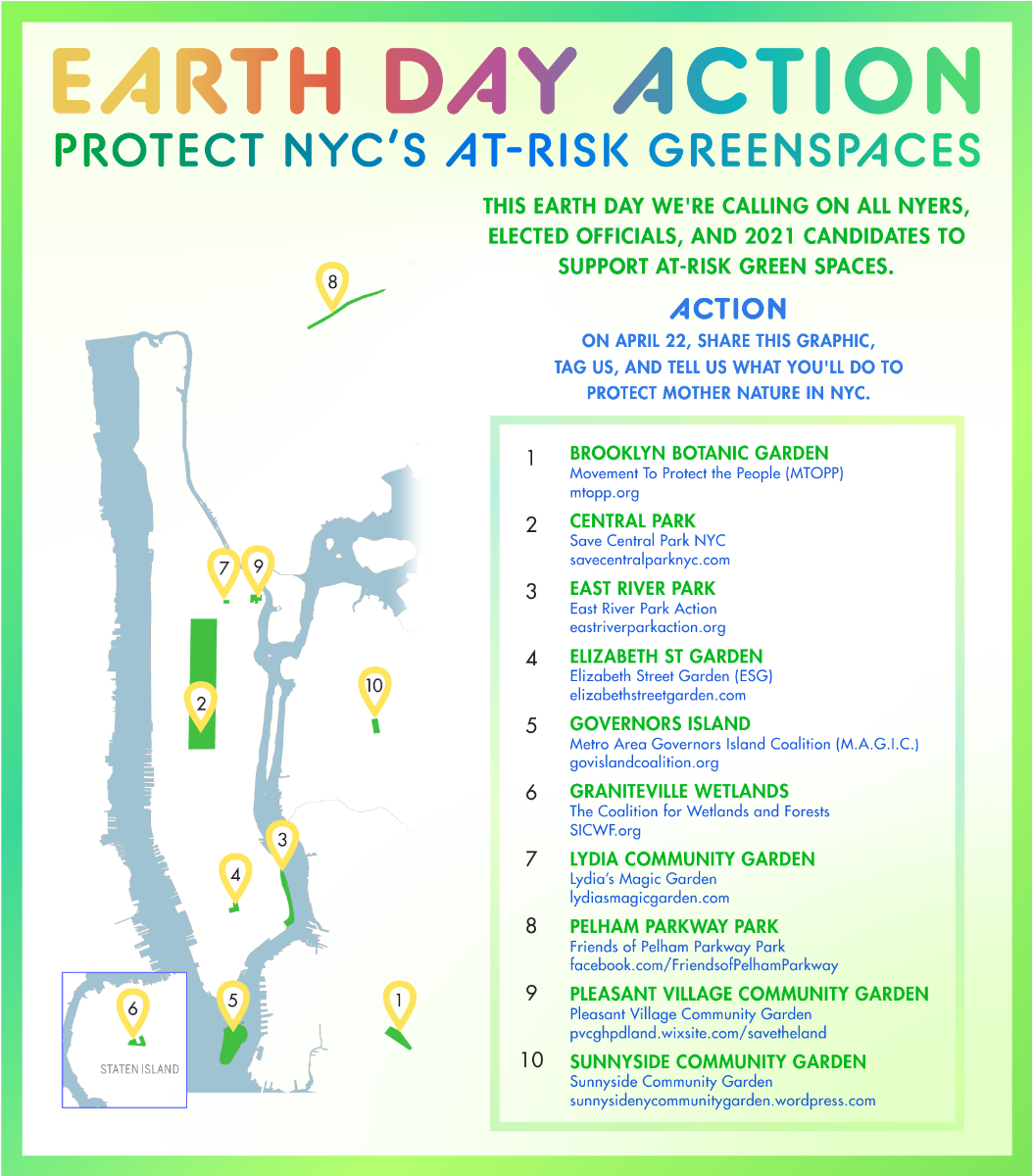 United under a Twitter hashtag, #EarthDayAction NYC, 10 groups representing threatened gardens, parks and wetlands are coming together to call on New Yorkers to protect Mother Earth.

They are specifically urging politicians and candidates for office to commit to saving the 10 green spaces in their group — including East River Park and Elizabeth Street Garden — and other threatened spaces across the city.

Some of the iconic green spaces, like Central Park and the Brooklyn Botanic Gardens, are threatened by the specter of looming high-rise development that would cast them into shadow.

Others, like Elizabeth Street Garden and Governors Island, are faced with development projects that would occur right on them.

The coalition of green groups is asking everyone to share the graphic, above, on social media, tag #EarthDayAction NYC, and “tell us what you’ll do to protect Mother Nature in NYC.”

Per the group’s letter: “Green space has always been a vital part of New York City. Throughout this global pandemic, the need for our parks, community gardens and open spaces has been emphasized more than ever before. Despite their importance, many of our green spaces are under threat; from devastating cuts to our budgets, to dubious contract stipulations. Communities across the city are too often left with the false choices put forth by our city government and by private developers that leave neighborhood treasures at risk of being negatively impacted or completely destroyed.

“This is a citywide issue, and this Earth Day, April 22, we’re calling on all New Yorkers, representatives and 2021 candidates to treat it as such and join us as we protect Mother Earth in NYC. #EarthDayActionNYC

“Elected officials and candidates: Don’t stop at vague statements about climate change: We want real action and transparency. Pledge to protect these and other at-risk green spaces across the city, tell us how you’re going to do so. We want details.

“New Yorkers, your vote counts and the upcoming elections will determine the future of many generations of our city. Let the citywide candidates and your local candidates know, if they want your vote, you want their commitment to protecting NYC’s at-risk green spaces.”