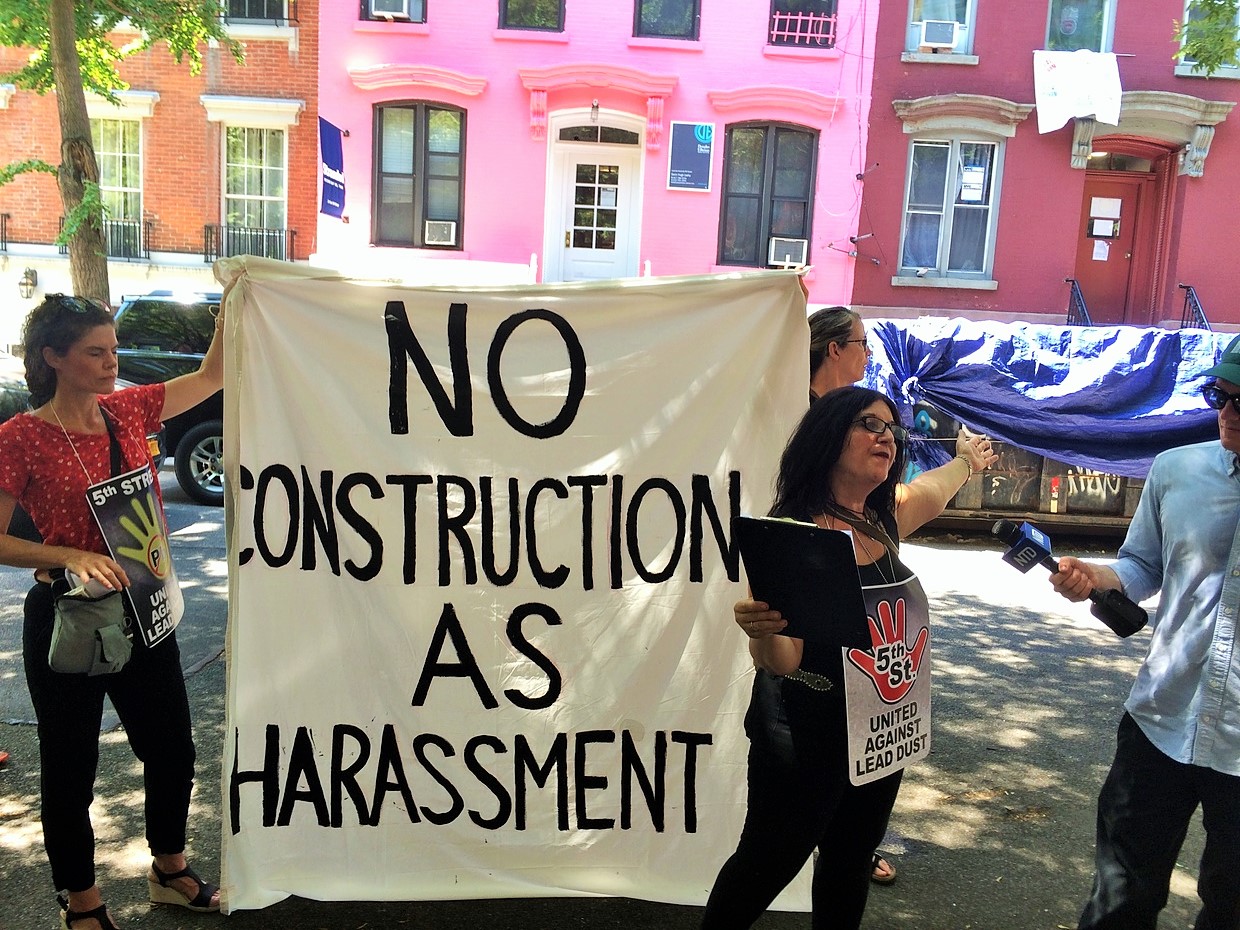 Tenants took over a block of E. Fifth St. on Wednesday morning, calling out landlords at two tenements for perpetrating what they called “construction as harassment” against them.

And while New York University’s growing presence Downtown has long been accused of driving gentrification, in a new twist, one of the landlords is actually a student there.

The tenants unveiled large banners and demanded justice, charging they have lived for months under “intense, mismanaged construction.”

They then marched down the block to 216 E. Fifth St., which was bought last year by N.Y.U. student Caspar Moll-von der Wettern. Since the purchase, members of the tenants association said, they been subjected to clouds of dust and debris circulating throughout the building, neglected repairs, unlawful buyout offers and unresponsive management.

The tenants were joined by the Cooper Square Committee and Lead Dust Free NYC Coalition, as well as state Senator Brad Hoylman and Assemblymember Deborah Glick and representatives from the offices of Councilmember Carlina Rivera and Manhattan Borough President Gale Brewer.

Residents of both pre-1960 buildings have reported work done that does not conform to Local Law 1 of 2004, which requires landlords to remediate apartments of any lead hazards to young children.

Tenant complaints include work performed by contractors without proper E.P.A. certification, without air scrubbers running, zip covers installed on doors or other measures taken to control the spread of construction dust from units where demolition occurred.

Marie-Claire Picher, a member of the 236 E. Fifth St. Tenants Association, said the building has been shown to have unsafe levels of lead.

“Within the last year, Sabet Group has been engaged in ongoing demolition and renovation of over 15 units, without complying with the lead dust regulations of the Tenant Protection Plan (TPP), signed by Leor Sabet on October 6, 2020, thereby exposing tenants to dangerous levels of lead,” she said. “This has been confirmed by a recent E.P.A.-certified analysis of construction dust in the building, that shows unsafe levels of lead. We also have serious concerns about the structural integrity of our building.”

Christine Rucci, a tenant at 216 E. Fifth St., said after the building was sold last March, the new owner has continued the same sort of hazardous construction practices that were done by the previous owner.

“We feel what we are facing constitutes construction as harassment,” she said. “I am already noticing symptoms including rashes, eye irritation, anxiety and other symptoms which coincide with this new construction. I am still waiting on repairs to three walls in my apartment, ordered by [the Department of Housing Preservation and Development], while our new landlord seems to be making excuses to avoid actually curing the situation. Why do I need to take him to court and
wait months for court orders? And with COVID-19, I’m concerned the courts will be backed up and it could take
a long time for my case to be resolved; all while each day I continue to live here, I may be exposed to more and more toxins.”

Yonatan Tadele, a housing organizer at the Cooper Square Committee, said the issue resonates far beyond this one block.

“These two buildings on E. Fifth St., just a stone’s throw from one another, tell a story which will resonate for many tenants around this city: a continuous battle for their safety and security in the face of hazardous building renovations,” he said. “Casper Moll-von der Wettern and Leor Sabet are just two of a number of bad-acting landlords engaging in the practice of ‘construction as harassment’ — often resulting in tenants’ exposure to noise, debris and, as we’re seeing here, lead-laden dust.

“To add insult to injury,” Tadele said, “Mr. Sabet, whose company owns over 35 properties in Manhattan, has been accused of engaging in such practices in at least three other buildings dating back to 2015. Enough is enough! We demand real accountability for landlords who continuously put their tenants’ safety at risk, and also that city agencies truly enforce Local Law 1 of 2004 and all relevant construction safety regulations.”

The politicians all issued statements of support for the tenants and stressed that Local Law 1 of 2004 must be enforced.

Morri Markowitz, director of the Lead Poisoning Prevention and Treatment Program at the Children’s Hospital at Montefiore, said lead dust is no small matter and can cause lead poisoning, especially in kids.

“Young children frequently put their fingers and objects in their mouths,” he said. “Whatever dust is on them is licked off and ingested. When the dust, derived from deteriorated lead paint, is in a child’s environment it becomes a main source of lead poisoning. Preventing lead dust dissemination during construction work is crucial to protecting children from this cause of lead poisoning.”