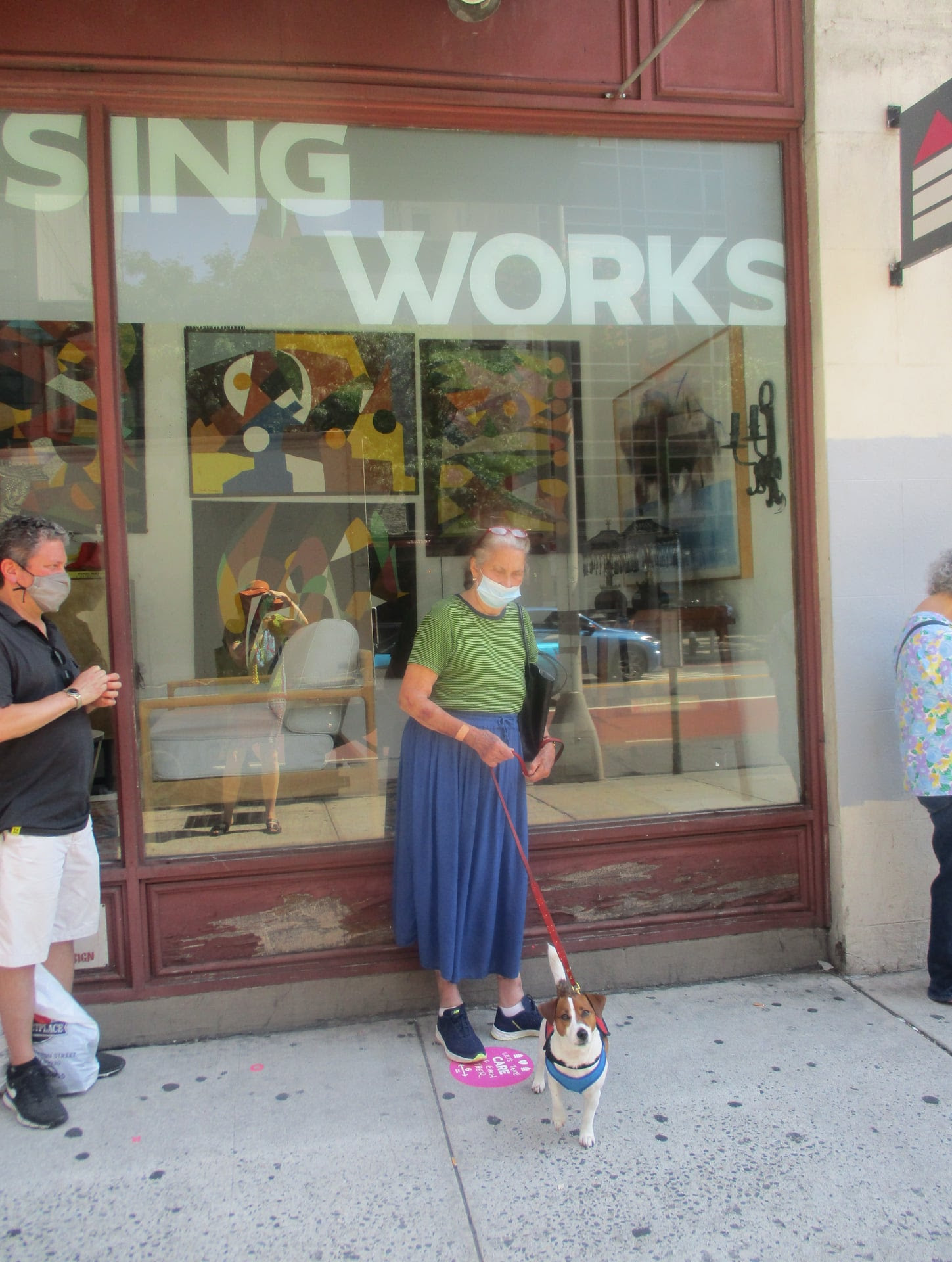 Waiting in line to get into Housing Works' thrift shop in Gramercy when it reopened on July 9. (Photo by Mary Reinholz)

Downsized Downtown thrift shops back in business after lockdown

Almost all of the varied merchandise in these offbeat establishments has been donated. Buyers often say they are looking for variety, something original, a treasure that they wouldn’t find paying top dollar at Bloomingdale’s or Macy’s.

But like conventional retailers, Downtown vintage venues have taken an economic hit from the coronavirus. This bargain-hunting scribe visited several that are now back in business, with fewer employees, after the long pause starting in late March, when they had to close their doors in compliance with Governor Cuomo’s executive order to combat the deadly disease.

These include Vintage Thrift Shop East in Gramercy, at 286 Third Ave. (between 22nd and 23rd Sts.), which reopened on Mon., July 6. The small nonprofit, which started out in 2000, was once touted as “a must stop for the discriminating bargain hunter” by a New York magazine critic. But Vintage recently lost two employees to the lockdown and had to apply for financial aid from GoFundMe to stay in operation, said manager Lisa Haspel. (There’s also a Vintage Thrift West, at 242 W. 10th St.). Profits from sales help the United Jewish Council of the East Side.

Given the store’s struggle to stay afloat, what are its prospects for the future? I inquired.

“We’ve only been back up for less than two weeks and I assume in time we’ll get back to normal,” Haspel said Monday. “But I don’t expect that to happen anytime soon.”

The store has loyal fans for its eclectic mix of apparel, furniture, footwear, eyewear and hats, plus plenty of artwork,  records and products for the kitchen. (I’ve purchased coffee mugs for a dollar here and stray silverware for a quarter each.)

“I heard they had started up again and I came here from the West Side just to see what they were selling,” said Mariana Morris, a middle-aged woman I noticed peering into the windows of the closed one-floor spot late Sunday afternoon.

“I love this store. The staff is friendly and the price is right,” continued Morris, who identified herself as “a mom.” She added, “They have a nice collection of clothing. I also I like their bric-a-brac, china, colored bottles, high-end stuff.”

The shop has three competitors in the Gramercy neighborhood. Housing Works nearby, at 157 E. 23rd St., is one of 10 high-end thrift shops operated by the famed New York City group that advocates for homeless people living with H.I.V./AIDS. The organization used to run 14 stores before COVID-19 hit, prompting four to be closed.

Housing Works, now 30 years old, had to lay off 120 employees who were working in the stores and in its distribution and processing centers, said Cheryl Grimm, vice president of thrift retailing, during a phone conversation with The Village Sun. “But we’re bringing back 99,” she added.

Grimm estimated that sales were down by about 30 percent compared to pre-pandemic times. She said she could not offer comment about ongoing efforts by some staff since last year to join a union.

When I told her that Housing Works’ flagship store in Chelsea, at 143 W. 17th St., which reopened July 2, seemed to have significantly reduced its inventory, Grimm acknowledged that changes had been made to accommodate social distancing.

“Our stores carried a lot of furniture, and we had to scale the furniture down to maintain 6 feet of distancing,” she said. “We also removed the manikins and eliminated bins for merchandise.”

All the Housing Works stores have Tuesday sales with 20 percent discounts for seniors and students, a store manager said. Other Housing Works thrift shops are scheduled to reopen this week, including the Soho store at 130 Crosby St., on Wed., July 15, and the West Village store, at 245 W. 10th St., on Sat., July 18.

A short line formed outside the Gramercy store when it reopened on July 9 at 11 a.m., with patrons waiting patiently to get in. Among them was a woman from the Upper East Side who arrived for her first visit with a small dog. But there were few people browsing when I stopped by shortly before the 7 p.m. closing a few days later. Items that caught my eye included a gray velvet Chesterfield sofa selling for $500. Definitely not cheap.

Prices can also soar at the elegant City Opera Thrift Shop, at 222 E. 23rd St., a high-end shop down the block that’s been in business for 41 years and helps fund the New York City Opera. You have to look around to find buys that won’t break the bank. Full disclosure: I’m still walking around in a pair of beautiful Salvatore Ferragamo sandals purchased here a decade ago for a mere $20.

One of the store’s managers said the thrift shop reopened “two and half weeks ago during phase two and three. We’ve limited the number of people who come into the shop.”

She wouldn’t confirm or deny if staff had been laid off during the lockdown.

Marlene Guttierez, a City Opera clerk, said business was just fine, attracting a “wide range” of shoppers of all ages. She motioned to a couple of young women examining a long summer skirt that could transition into fall. (One of them said they were in “the fashion business in another country.”)

Guttierez stood next to a display of two jackets in velvety pink fabric priced at $50 each. They could take any female of voting age to a virtual opera or political rally if she wasn’t worried about paying the rent.

Earlier, heading east on 23rd St. from Housing Works, I looked in on the decidedly affordable Salvation Army Family Store & Distribution Center, at 220 E. 23rd St., where I once purchased a computer for about $90. The store was practically empty despite a huge assortment of men’s trousers.

Close by, the NYNJ Goodwill thrift shop was boarded up, shuttered during the lockdown when a rent hike also forced the store to close, said Tyler Thomas, a manager at the Goodwill shop at 7 W. 14th St. That store in the chain reopened about two and half weeks ago and appeared to be fairly busy during my visits.

Goodwill offers 10 percent discounts for seniors every Tuesday; for veterans and active military people every Thursday; and for students on Saturday. Thomas said seniors get a particularly good deal on what he called “$2 dollar Tuesday,” when merch ticketed with a color for the day gets priced at $2 each.

Prices have been dramatically slashed by half at the upscale Cure Thrift Shop, at 111 E. 12th St., and could remain that way “forever,” said Liz Wolff, the store’s vivacious founder, who happened to be on the premises when I visited her colorful store.

“It’s a crazy time,” said Wolff, who at age 11 was diagnosed with diabetes, 25 years ago, but runs a vibrant business by her account, sending all proceeds from Cure sales to benefit diabetes 1 research and advocacy. She said the shop has lost “half” of its employees — eight — since the pandemic began, adding that they were college students and safely returned to their home states.

Since then, she and her remaining staff have removed a few of their center racks “to allow for better social distancing,” she said. “We also moved more furniture to our lower level to create a more optimal and spacious shopping experience.”

Cure, a 501C3 nonprofit, has been in operation for 12 years this month and Wolff claimed the merchandise “has always been affordable. We run the ‘half-off clothing sale’ because, frankly, we have too much clothing and need to move it as quickly as possible,” she said.

“We are fortunate to receive donations from our community every day, but we don’t have much room to store it,” she added. “So our customers can look forward to even lower prices in the coming weeks.”

As for price points, Wolf said they range from $50 to $10, depending on the item.

“Each item is individually priced according to its actual secondhand value,” she explained in an e-mail. “Most shorts are $10. Most clothing items are under $20. We have tons of designer items for all seasons!”

She noted most sales are for clothing — about 60 percent of total sales. In addition, Cure launched an online store. It will begin selling higher-end items on eBay later this month.

Wolff doesn’t believe that people who shop at Cure are motivated by financial reasons.

“Cure and has always been a place where people can escape from the everyday city streets, find incredible and rare vintage and designer clothing, unique decorations for their home, and gifts for loved ones,” she said.

As for what lies ahead, she sounded an upbeat note.

“We have now been open for nearly three weeks and business is almost back to where it was, pre-pandemic,” she wrote. “We are optimistic about the future of Cure Thrift and the future of NYC.”