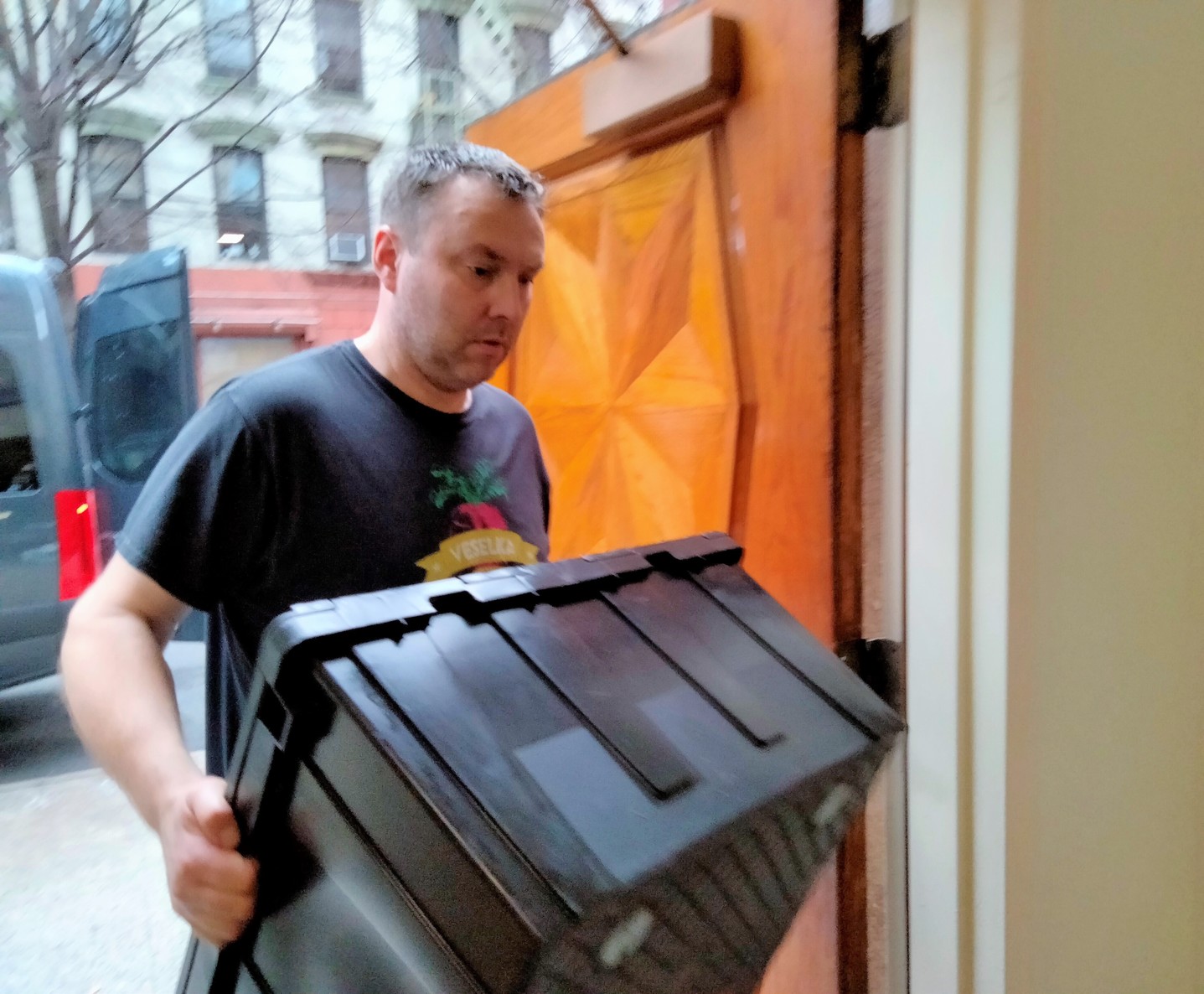 Don’t just stand with Ukraine, stand up against Putin, Veselka owner, others urge

BY GERARD FLYNN | What can be done to help the beleaguered people of Ukraine after three weeks of a brutal Russian invasion that has killed and injured thousands of civilians?

For what it’s worth, some have chosen to pray for the people of Ukraine. At the risk of starting a nuclear war, others are pushing for a no-fly zone over the country. And then there are the owner and staff of Veselka in the East Village, who for the past week have been collecting supplies from generous customers and storing them in the basement of the nearby St. George Ukrainian Catholic Church before shipping them out to the front line.

“This is the biggest load for one day,” Jason Birchard, Veselka’s owner and a third-generation Ukrainian American, told The Village Sun last Monday evening. He was pointing to a van parked outside the church, at E. Seventh Street near Third Avenue, the gray Mercedes packed with much-needed supplies.

“These will go to humanitarian relief, people helping on the border and people in Ukraine who need it,” he said. “The first shipment went out today.”

For the better part of an hour, Birchard and Veselka staff busied themselves in the house of worship’s basement, hauling load after load of essential goods down the stairs.

Diapers, formula, energy bars, coffee, tea, canned food and batteries — all items, he said, that are in high demand as a looming humanitarian crisis continues in Europe that has not been seen since World War II. So far an estimated 2 million Ukrainians have fled the fighting, with many more trapped as Russian bombs rain down.

“We are doing our best to support, but it’s really a dire situation that is happening over there,” he said. Three hundred boxes were shipped Monday by express mail to those in need.

“Mothers and fathers are sleeping in bomb shelters, grandmas making Molotov cocktails, it’s a crazy time,” he said. “We are trying to do the best we can.”

Birchard has an aunt in the far west part of Ukraine. Meanwhile, many members of his staff have close family and friends in a country under constant bombardment.

The Russian encircling of Ukrainian cities is eerily reminiscent of the brutal siege in 2000 of Grozny, the capital of Chechnya, which was razed after a bloody Russian assault. However, the fate of Grozny did not provoke bold headlines in the Western media or global calls for sanctions. Before that war ended, it took the lives, by some estimates, of up to 200,000 civilians.

As of last Monday, the Chechen conflict had stirred fears in Ukraine that Putin would again deploy the thermobaric bomb, or “vacuum bomb,” a dreaded ordnance dropped on population centers in Chechnya.

“Everybody is worried about that situation,” one Veselka staff member told The Village Sun. “That’s why everyone is helping, you know.” When asked if he saw an end to the conflict anytime soon, he replied, “Nobody knows how long.”

Two days ago, though, Russia confirmed that it had, in fact, started using the oxygen-sucking thermobaric bombs in Ukraine.

In addition to the generosity of Veselka’s customers, donations have been pouring into the East Village church from other parts of the city, including from one frail-looking lady who wheeled a weighty load of aid from the Bronx, including gloves, slippers and pain killers.

Despite the prayers, protests and humanitarian aid pouring into Ukraine, Birchard said it’s not enough and that he is “losing faith that someone is going to help these poor people who are dying innocently.”

The restaurateur’s solution, however, comes at great risk for global conflict.

“We all have to stand up collectively as a world, as a free society,” he said. “We have gone to war with other tyrants, madmen, in Iraq as a coalition. If the U.S. doesn’t want to do it, why can’t we do it globally?”

During our conversation, the North Atlantic Treaty Organization (NATO), came up. Before the invasion, Russia made it clear that Ukraine joining NATO was a red line that could not be crossed.

“It could be NATO, it could be E.U. [European Union],” Birchard said. “It could be a coalition of multiple countries. Why does it have to be the United States?”

Just mounting demonstrations against the invasion won’t do, he stressed.

Unless someone actually stands up to the Russian forces, he wondered of the protesting, “What is it all about?”

Birchard’s sentiments were shared by one Ukrainian parishioner attending 6 p.m. Mass to pray for the people of her home country and her young American cousin who left to fight in the war.

“They are bombing our cities, killing people,” Christine said, her face creased in anguish. “We are supposed to pray for, to stop the evil. Who is going to support us?” she asked.

Despite the apocalyptic risks, the woman, who lives in the Bronx, said she wants the Western powers to stop the Russian air force from operating over her homeland.

“Close our air, if it’s possible,” she said, twirling her finger, pointing to the overcast sky. “Close it, to stop the bombing from the sky, because they are doing, like, carpet bombing and whole cities destroyed, Kharkiv, for example. They destroyed Kharkiv.”

Faced with the shocking images of Russian military forces murdering civilians across Ukraine, Western countries are under mounting pressure to enforce a no-fly zone, which could involve shooting down planes from a country possessing some 6,000 nuclear warheads and threatening to use them.

Taking snaps with her cell phone outside the church of a shrine, featuring wilted daffodils and iconic images of bloodied Ukrainians and terrified children, Kim Depole had no doubt what needs to be done.

But would enforcing a no-fly zone risk a war with the Russians?