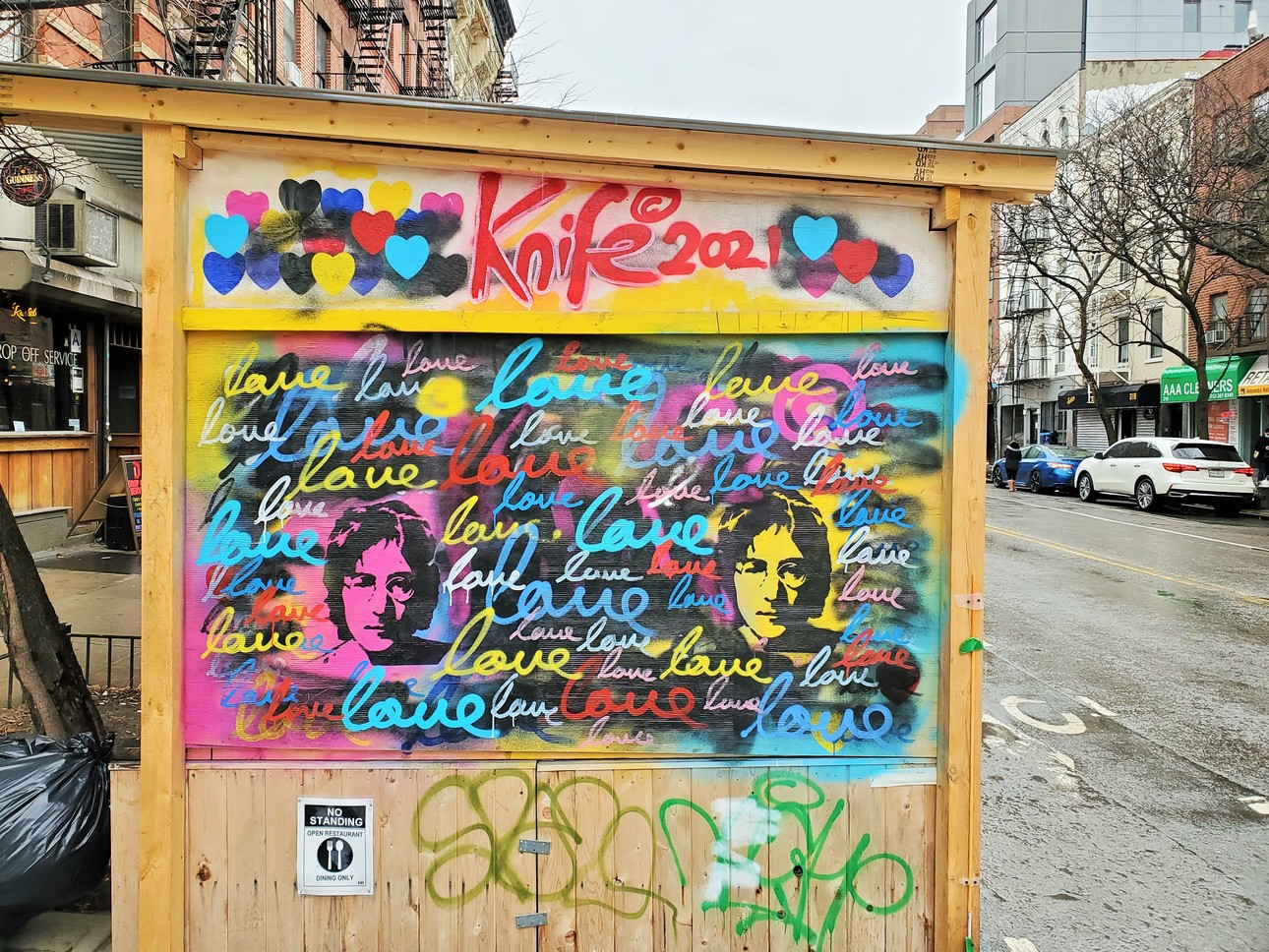 Imagine: The writer proposes that neighborhoods be allowed to plan their own streets. Above, an outdoor dining shed on First Ave. earlier this year painted by local artist Ian Knife. (Photo by The Village Sun)

Don’t give away the streets to landlords and restaurants

BY LYNN ELLSWORTH | I love sidewalk cafes. I especially like the nice ones that have comfy chairs and plantings that separate me from people passing by while I eat.

I also like streets, and while some of the new food sheds on the streets are great, giving the roadway (and sidewalks) away permanently to restaurants is a truly bad idea.

I don’t have a car: This is not about parking. Rather, I have long imagined other uses for our streets: outdoor classrooms, plazas, play streets, shaded boulevards with widened sidewalks, entirely new parks and parklets, dog runs, big tents for civic meetings for community organizations, delivery distribution points, and streets given over to holiday markets, pushcarts, flea markets, smorgasbords and farmers markets.

But the new proposal to permanently give away all the sidewalks and roadways in Manhattan as of right to the restaurant industry — and the landlords who own those retail spaces — is deeply flawed. There is no way to say that this is not a radical privatization of the public realm. I would support the sidewalk part of the proposal if the city had any regulatory capacity and if we were charging serious rent for the space, but the roadway part of the giveaway is a terrible idea. Here’s why and how to fix it:

• First, the restaurant industry is not still the victim portrayed in the media last year: They are getting massive federal bailouts. The latest federal bailout fund is $60 billion, on top of the bailout they already got. We don’t need to feel guilty.

• The city’s Department of Transportation is proposing to give restaurants (and the landlords) big chunks of the sidewalk and the roadway for trivial license fees that currently top out at $750, plus a $1,500 security deposit. This is not the same as charging rent. But why not charge rent to a private business that uses our public realm to make private profits? We should not be giving our assets away and losing the economic value of this space for the public budget. Rent is not unheard of for sidewalk space. D.O.T. charged one Christmas tree vendor $56,000 a month for sidewalk space in Soho. So why not charge restaurants?

Before this proposal goes any further, we need a financial study on the value of this space and how much it is worth. If the city does not capture the value of sidewalk space in rents, then private landlords will surely capture the value by charging higher rents to the restaurants. I can imagine the landlord lobby already rubbing their hands together in greedy anticipation. Many of them will double their square footage by taking over the public space.

• D.O.T. has taken a massive deregulatory approach here rather than a thoughtful one: trivial permit fees, generous “waivers” for violating the rules, free rent, ignoring the service lane requirement for outdoor cafes, no design review, warnings instead of fines and slow-walking community complaints on issues related to noise, overcrowded sidewalks, trash, rats and abandoned sheds. Wrong approach! It treats the residents of the neighborhood and other users of the sidewalk as irrelevant.

• D.O.T. has not figured out a procedural solution to the noise, trash and overcrowding problems that already exist. Imposing fines would be better than a slap on the wrist, but can they collect the fines? The Department of Buildings is famous for not collecting $1.5 billion in outstanding fines. How would D.O.T. do any better?

Habitually despotic D.O.T. has not given neighborhoods the chance to do their own strategic planning for their own streets. Why not redesign the process so we can do this? There is so much talk of community planning in the City Council: It could start with the streets.

My suggestion: The sidewalk and road plans should arise out of real neighborhood planning, not from one-size-fits all impositions of a despotic D.O.T. in a plan that will ultimately benefit the landlords who own the spaces that restaurants lease.

Finally, rather than privatize our roadways for restaurants, let’s physically widen the sidewalk. This would rectify the disastrous street-widening program D.O.T. undertook in the 1950s and ’60s. Doing this would also eliminate most of the road-sharing issues that vex the current proposal.