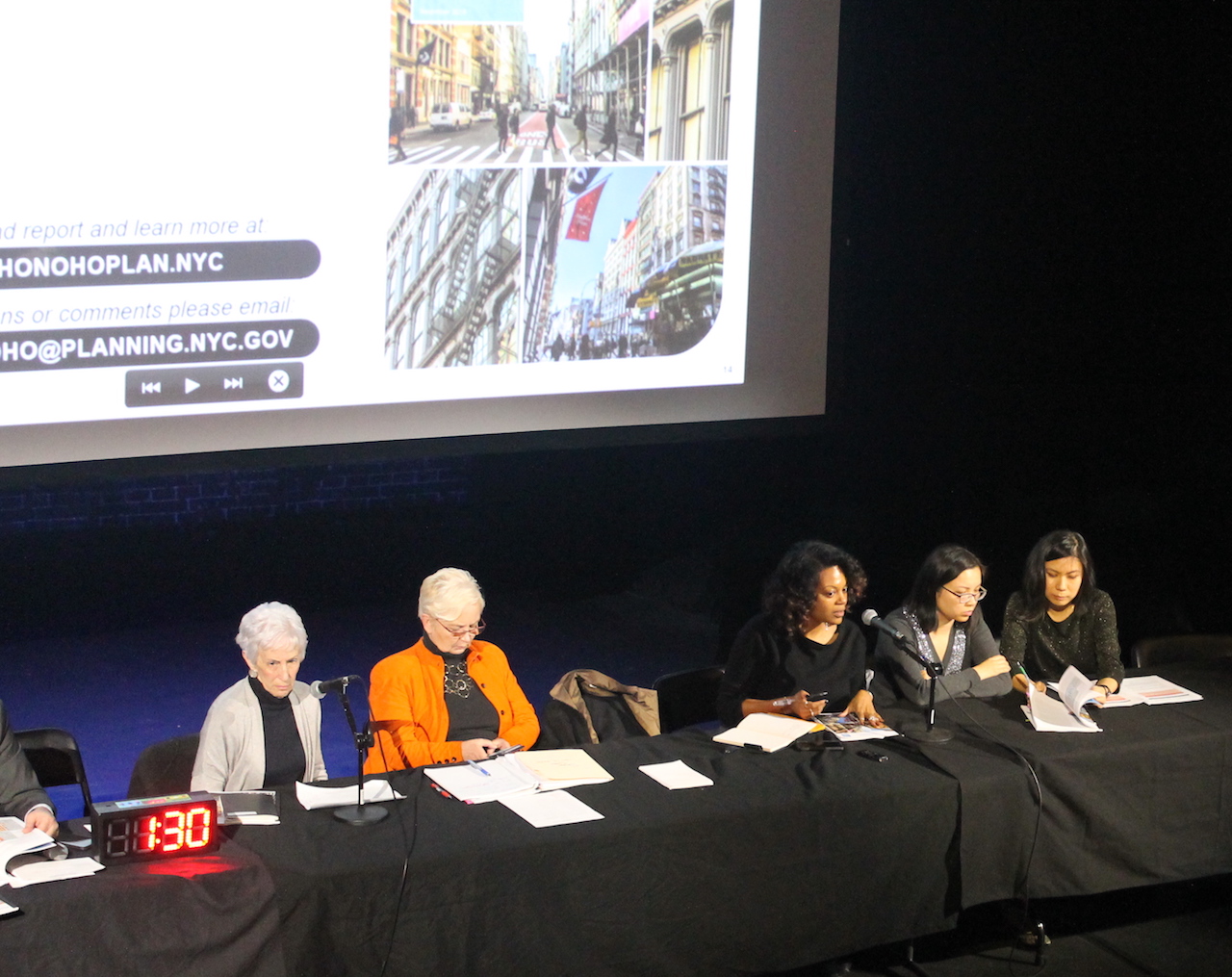 BY LINCOLN ANDERSON | A new “envisioning” process for Soho and Noho has longtime artist residents foreseeing a looming disaster for the famed district.

But property owners — along with a group of young Soho-obsessed planning wonks — are only seeing opportunity. Property owners, naturally, are also seeing green.

The opposing viewpoints couldn’t have been clearer at a meeting on the Envision Soho/Noho initiative on Wed., Jan. 15. Held by the Community Board 2 Land Use Committee, the event was a discussion of the priorities and recommendations of the recently released report for the Envision process.

Based on the notion that Soho and Noho’s manufacturing zoning is outdated and that the district has land-use issues that should be changed, the Envision process was launched in January 2019. The project’s co-sponsors are Manhattan Borough President Gale Brewer, Councilmember Margaret Chin and Marisa Lago, the chairperson of the Department of City Planning.

Most of Soho and Noho is covered by landmarked historic districts, making it hard to build new structures or modify existing ones. Not surprisingly, then, among the most hotly debated issues was the idea of developing on what the Envision report refers to as “underused land,” such as one-story structures, by adding new “infill” buildings.

“Explore opportunities for increased density, where appropriate,” the report says, while adding that new development should be contextual with what already exists.

But local residents said the neighborhood is already bursting at the seams and overflowing with trash and hordes of tourist and shopper foot traffic.

“It doesn’t make sense to upzone the size of buildings when the city cannot provide services as it is,” said Ann Levy, a longtime Soho resident. “We can’t have higher buildings or bigger buildings.

“The city keeps trying to squeeze more profit out of this neighborhood,” she protested.

“Our community already cannot handle the conditions on the sidewalk and that would get out of control with the changes,” another resident said.

The Envision report notes that Soho/Noho is among America’s top shopping districts, raking in $3.1 billion in 2016, second in New York City only to Fifth Ave. The SoHo/NoHo district also contributes an estimated $170 million in sales tax to New York City and State each year.

But many of the area’s 8,000 residents — particularly the artists — lament the “malling” of Soho, which has seen it turned into a frenetic shopping destination.

Soho activist Pete Davies said it’s time for some clarity on just what is being considered, in terms of increasing the area’s density. Like others, he blasted the vagueness of the report’s recommendations.

“What I’d like to know is when are we going to get some specifics on upzoning and changes in F.A.R.?” he said, to applause. He was referring to floor-area ratio, which determines how much bulk can be constructed on a given building site.

“At the moment, we have no specifics,” one of the panelists answered.

David Mulkins, president of Bowery Alliance of Neighbors, or BAN — the Bowery is in part of the study area — warned that any tinkering with the community’s built fabric must be done with extreme caution.

“If you ever visited cities like Paris or Prague, you know those cities would never consider any reckless rezoning of their historic areas,” he said, to strong applause from the audience.

“Any kind of zoning change for these areas has to be covered very carefully,” Mulkins said, “no loopholes, no upzoning — because this is a live-work space for artists.”

Residents also called for keeping Soho’s cap on retail stores’ size at 10,000 square feet — although some existing big-box-type stores are already in violation due to lax enforcement.

Bradley Fishel, chairperson of the Noho Business Improvement District and vice president of Renaissance Properties, said he supports rezoning the district to allow “as-of-right retail” on the ground floor. Finding manufacturing uses for these spaces is nearly impossible, he added.

“There are no manufacturing uses virtually anywhere on the island of Manhattan,” he stated.

Currently, retail uses are not allowed on the first floor of most Soho and Noho’s buildings. To legalize these retail uses, it takes a cumbersome special-permit process. And, as the Envision report notes, that works against smaller retailers since they often don’t have the funds to go through that legalization effort. Big national stores, on the other hand, have the cash required to jump through the bureaucratic hoops.

“There are a lot of buildings with warehoused apartments in East Harlem,” she declared. “Why doesn’t the city use those buildings for affordable housing? They’ve been sitting there for more than a decade.”

Although Soho and Noho’s zoning requires that one occupant of each apartment be an artist certified by the city’s Department of Cultural Affairs, the Envision report notes the majority of the district’s denizens today are not in compliance — as in, nonartists. Whereas hundreds of artists sought certification in the 1980s, today the number doing so is just a trickle.

Yet, artists and nonartists were not at odds at the hearing, in terms of both being against drastically changing the neighborhood’s fabric.

Kim Lipman, who has lived at Crosby St. for 30 years, said that even though Soho has no schools, its large lofts attracted families. There are no artists at all in her building, according to her.

“A developer bought it and sold [the units] to nonartists,” she noted.

Although advocating for legalizing nonartist residents’ status, she, too, spoke against upzoning.

“I think people living in this part of the city — and around the world — would be saddened to see this area upzoned,” she said, “in an area that by some miracle has maintained some semblance of its historic character.”

Politico down on upzoning

“I’m against upzoning for Soho,” he said.

Marte added he was skeptical of the claims that if density were increased it would actually create affordable housing.

“How we can we trust the city government that doesn’t want to build affordable housing a few blocks away from here?” he asked.

The Envision recommendations also say new construction should have smaller apartments than the spacious lofts Soho and Noho are known for. Another idea is for new buildings — and commercial-to-retail building conversions — to have “co-working spaces” that the residents, as well as nonresidents, could use.

Meanwhile, members of the group Open New York repeatedly spoke in favor of greater density. Most of them young white males, they also advocated for residential diversity and affordable housing for a younger generation of artists who, they said, don’t have enough money to reside in today’s Soho and Noho.

“People in their 20s and 30s can’t afford to live in neighborhoods like Soho,” one of them stated.

Soho was colonized by artists who illegally squatted in abandoned factory buildings in the 1960s and ’70s, renovating the lofts by themselves. To legalize artist residents in the manufacturing area, the city created Joint Live-Work Quarters for Artists, or J.L.W.Q.A., zoning.

Today about 30 percent of Soho and Noho’s apartments have J.L.Q.W.A. zoning. Many of the district’s current artist residents are aging in place. Apartments can be passed down to nonartist children. Other residential apartments without J.L.Q.W.A. were grandfathered in.

There were some sounds of puzzlement — “Wha?” — from the artists in response to his comment.

Another man from the development-happy group stressed that the “new generation of artists are looking for the same thing” that Soho and Noho’s veteran artists originally were, namely, affordable housing. This new crop of creators, he said, includes a greater number of people of color and women.

The fact that he, like most of the other Open New York speakers, was a white male was not lost on the artist residents in the audience, who frequently groaned and hooted derisively at the comments by the group’s members.

Meanwhile, local residents haven’t taken kindly to the Envision report and Open New York describing them as rich, which they say is misleading.

“It has been repeated ad nauseam that this is a wealthy enclave by the Open New York minions of the developers a.k.a. REBNY,” Michele Campo, vice president of BAN, told the meeting.

“Woo!” came a hoot of support and cheers from the audience. She was referring to the Real Estate Board of New York. Open New York denies it is a lackey for REBNY.

According to the report, median household income in Soho/Noho is around $144,500, significantly higher than the rest of Manhattan, which has a median income of around $79,800.

Afterward, current residents scoffed at the persistent presence of the Open New York members, who have made a point of attending all the Envision Soho/Noho public meetings. Yet, they noted that Open New Yorkers haven’t surfaced at other major projects to advocate for affordable housing.

“Where were they when they built Hudson Yards?” asked BAN’s Campo, adding, “They’re not grassroots — they’re astroturf.”

Asked why there is such intense focus on Soho and Noho by the real-estate industry, Campo retorted, “Because they’re vultures!”

Marte also said that he has never seen Open New York members at rallies advocating for the Chinatown Working Group plan. And yet, they have focused on another Soho-area fight, he noted — the city’s push to build affordable housing on the Elizabeth St. Garden — advocating for the project.

For some reason, Open New York sees Soho as its ground zero.

For its part, the Envision report notes the area, with good transportation connections, is geographically in a sweet spot, which is another important factor.

“The needs for space to accommodate population and economic growth in areas with access to the region’s economic engine remain relevant and vital,” the report states.

Of the Open New York group, Tenenbaum said, “These guys showed up at every meeting as if they were residents and stakeholders. What is the definition of a stakeholder?”

But Tenenbaum noted that Asian residents living in Soho’s southeastern corner are actually the ones who stand to be the worst impacted by any potential upzoning and increased density.

“The people who are going to be most harmed are the people of color, Asians, in the part of Soho that is not landmarked,” she said. “Forty percent of our population [in that area] is Asian.”