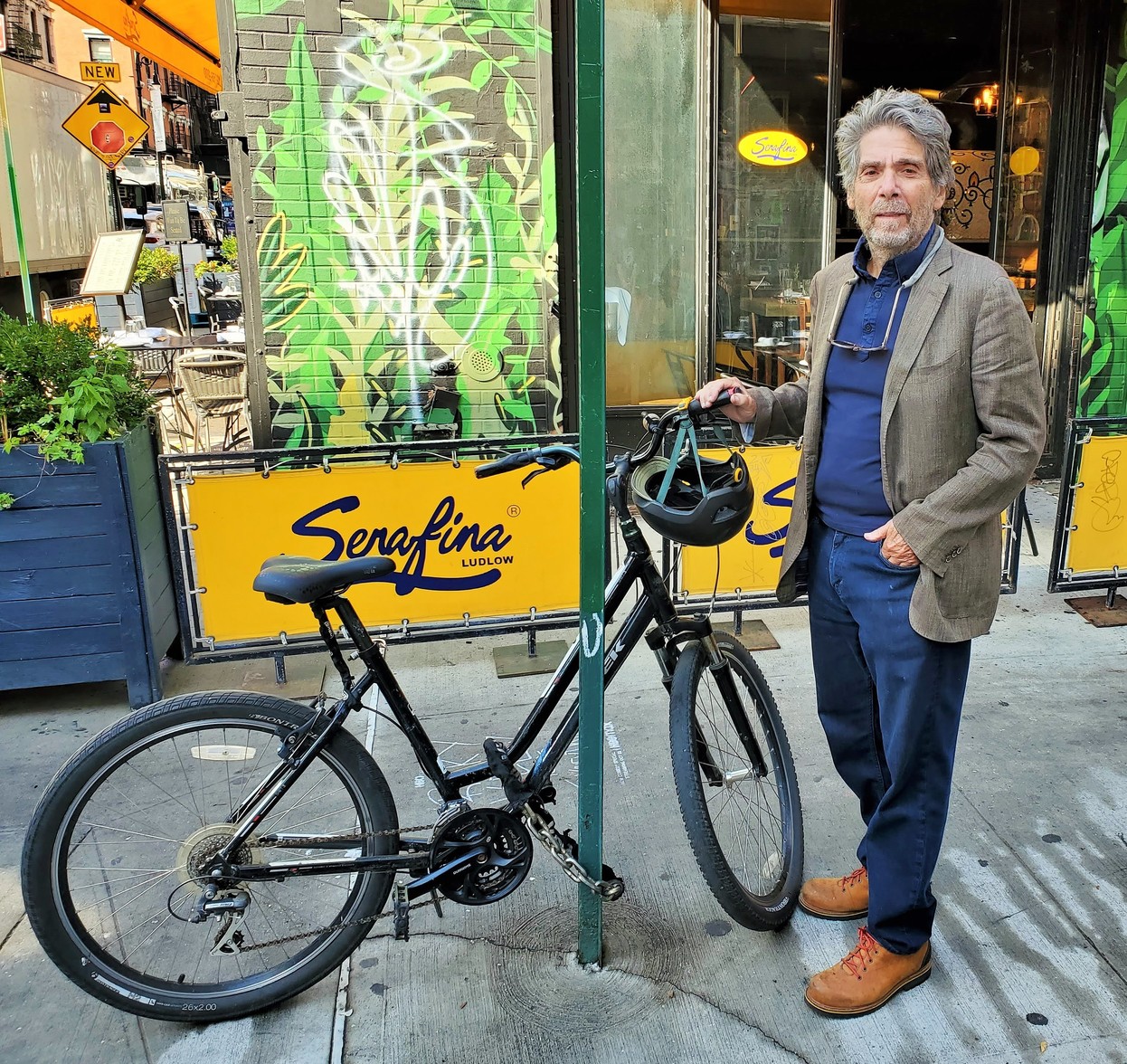 Stu Waldman, 80, who biked across town to join the press conference, said the dining sheds should be replaced with bike racks. (Photo by The Village Sun)

Dining sheds are driving them crazy — but they don’t drive

BY LINCOLN ANDERSON | It’s not about being for or against “breaking car culture” — but about residents being pushed to the breaking point.

Downtown residents who this week filed a lawsuit against Mayor de Blasio’s Open Restaurants program held a press conference at Ludlow and Rivington Streets, in the heart of Hell Square, Thursday morning.

As Diem Boyd, an area resident and the founder of LES Dwellers, put it, Hell Square “has gotten a lot hotter” — in the negative sense — since the outdoor dining initiative launched 16 months ago. The program, pitched as a lifeline for pandemic-ravaged restaurants and bars, has deluged the nine-block area with thousands of more people coming to party and whoop it up, she said.

“Bars, clubs and restaurants have tripled in size,” thanks to all the new outdoor seating, said Boyd, a plaintiff in the lawsuit. “N.Y.P.D. is incapable of dealing with it. The cops can’t handle it, they told us. It’s a circus atmosphere. It has doubled, tripled the amount of people in the area. This is what happens to a neighborhood when bars, restaurants and nightlife are favored over residents.”

Meanwhile, local mom-and-pop businesses, like pet stores, tailors and others, aren’t getting the same kind of help from the city and are suffering, she noted, calling it a lack of “street equity.”

“At the heart of this is street equity and the soul of New York City,” Boyd stressed. “The time is now for a bold vision for our streets that does not involve cars or bars.”

Meanwhile, advocates for reducing the amount of cars and parking on the streets, like Streetsblog and others, have tried to spin locals’ opposition to the outdoor dining sheds as just priviledged, wealthy residents wanting to selfishly protect street parking spaces for their cars. Transportation Alternatives also supports the Open Restaurants program.

But most of those at Thursday’s press conference said they don’t even own a car.

Stu Waldman, age 80, another plaintiff on the suit, bicycled over to the Lower East Side press conference from his home in the West Village. He used the bike paths.

“The West Village, Chelsea is among the lowest car-owning areas of the city,” he said, speaking after the press conference. “I haven’t owned a car for 15 years. I bike, walk, take the subway. Cars are not part of the culture here. I’m pro-bike.”

In fact, Manhattan has some of the lowest car-ownership rates in the entire city.

Waldman scoffed at the idea that the dining sheds would lead to fewer cars on the streets, calling it a “red herring.”

“The sheds take up 3 percent of the parking spaces in the city,” he said. “Do you think someone’s going to give up their Escalade for that? They just drive around the block more looking for a parking space.”

He suggeseted an alternative: “Get rid of the sheds and get bike racks to replace them.”

“I don’t drive. I don’t have a license,” she said. “You don’t want me on the road. I tried to get a license and I failed three times. This is not a fight about parking,” she stressed. “We are talking about quality of life.

“Ninety-nine percent of these people around you don’t have cars, we don’t drive,” she stressed of the activists. “What we want is truly public streets — not privatization. The sheds are privatization.”

Boyd slammed anti-car activist groups who try to spin the outdoor dining sheds as a way to “reclaim public space.”

“If they were really about public space, they would not be privatizing it for the restaurant industry and landlords,” she declared.

Instead, she said, public streets should be reclaimed by filling them with “loading zones, trees, parklets, space for pedestrians and bikes, space where mothers can walk with babies in strollers, benches — where everybody can sit, not just if you buy a $25 burger or beer.”

Micki McGee, a leader of South Village Neighbors, said she doesn’t disagree with anti-car activists, in terms of the city being overrun by auto vehicles, but that lining streets with dining sheds is not the best solution.

“The city ceded space to cars in the 1930 and ’40s,” she said. “But now ceding it to one industry, does that make sense in terms of planning? Do we want one industry to be supplanted by another?”

Asked if she had a car, she responded, “A car? No, of course not. That’d be madness. It’s too dificult in the city, it’s too expensive.”

McGee spoke of the desire to live in a “15-minute neighborhood,” where New Yorkers can walk to everything they need within that time span — but which is becoming increasingly harder with the spread of the bar and restaurant “monoculture,” as many dub it.

Lief Arntzen is married to Kathryn Arntzen, the president of the Central Village Block Association, who is the lead plaintiff on the lawsuit.

Asked about “break car culture” advocates and their claim that the lawsuit is driven by car owners who want to keep their parking, he said it’s simply off-base.

“It’s bulls—,” he said. “Totally BS. The word [‘parking’] is used in one affidavit out of 108 pages. I think ‘parking’ is only mentioned on one page or one-and-a-half pages. One woman mentions it in her afidavit. They need to read the lawsuit.”

Arntzen admitted he does, in fact, own an automobile.

“I work in New Jersey,” he said. “There’s no other way to get out there, other than buses. But it’s not about cars,” he said of the struggle to rein in the sheds.

Another plaintiff, Marcell Rocha, a fashion stylist and editor who has lived on Orchard Street for 13 years, would not even think of owning an automobile.

“This is really not about the cars,” said Anette Frey, who attended the press conference. “It’s about the quality of life of residents.”

Frey lives “two doors down” from the Emma Peel Room, on Broome Street, and said the cloud of outdoor cigarette smoke from the bar is terrible.

On the other hand, while most of the plaintiffs are not drivers, Boyd said, the newly expanded party scene is actually attracting cars to the Downtown area.

“The people that live here do not own cars,” she stressed. “All of the people driving in here — the partiers — have cars.

“If you actually read the case, it’s about people’s lives that are being totally disrupted.”