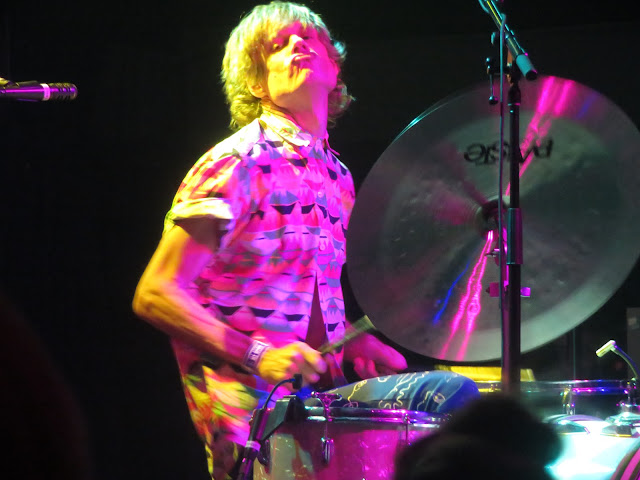 BY EVERYNIGHT CHARLEY CRESPO | While most bands took a Rip Van Winkle nap during the pandemic, Deerhoof was more prolific than ever.

For a band that toured almost constantly for 25 years before the pandemic, the two-year break from the road was an especially long hiatus. Vocalist/bassist Satomi Matsuzaki, guitarists John Dieterich and Ed Rodríguez, and drummer/founder Greg Saunier reunited this past November. Together, they began playing the new songs for the first timeside by side. They booked a few select live dates for 2022.

Deerhoof formed in San Francisco in 1994 as an improvised noise punk band. While the band uses considerably more structure now, the music remains experimental and daring. As imaginative as Deerhoof is on its recordings, the intensity of its creative chaos is best experienced when one is in the same room as the four musicians.

At Elsewhere, in Bushwick, on May 9, the support act, Editrix, a trio from western Massachusetts, sounded a lot like old Deerhoof — complex, eclectic, nerdy and fun. Deerhoof then showed its own progressive timeline, playing old and new compositions. Mazelike arrangements, whimsical vocals, coarse guitar riffs and intricate percussion interplayed on every song.

Deerhoof’s tumultuous waves of music were harsh and jarring at times, but as the music was built on quirky complexity, the songs’ seemingly fractured movements jumped abruptly from loud and fast to soft and somber, taking the listener to the brink of a cliff, pausing and then retreating. Well-tempered and artfully curated, the compositions were tightly organized, even when frenzied. The adventurous slips into improvisational bedlam were manicured rapidly and intrusively led back to sugary melodies.

Deerhoof remains perched on the most radical edge of avant-garde rock music. Uniquely unclassifiable and head-spinning, Deerhoof gives new meaning to indie rock. To see this music unravel live on stage and disappear forever into the atmosphere is an unparalleled experience.

For more of Evernight Charley Crespo’s coverage of the city’s music scene, check out TheManhattanBeat.