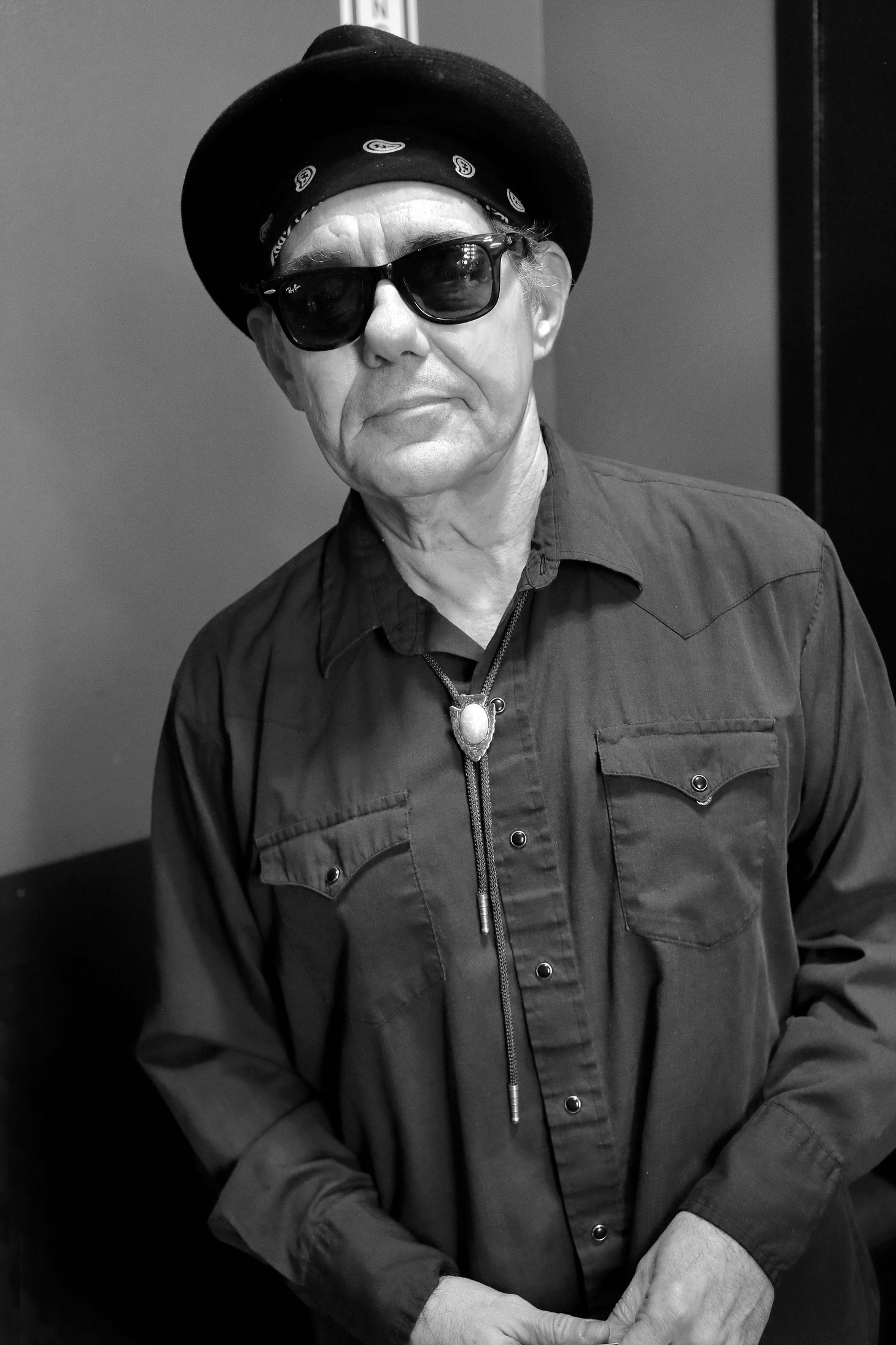 BY JOHN PIETARO | Dimitri Papadopoulos, known as Dee Pop to a fan base of millions, died in his sleep at his home in Brooklyn on Oct. 9. He was 65.

The drummer, a founding member of the celebrated Bush Tetras, performed with an astounding array of artists over the past four decades, from punk royalty to several generations of Downtown experimentalists.

He is survived by a son, Charlie, and daughter, Nicole.

The band — including the other Bush Tetras founders, Pat Place and Cynthia Sley — was set to celebrate the release of their boxed-set compendium, “Rhythm and Paranoia,” at Howl Happening in the East Village on the very night of Dee’s passing. The event instead served as a remembrance and memorial for the drummer.

Born in the Forest Hills section of Queens in 1956, Papadopoulos’s immersion into music came about in childhood and was varied from the start. He explained to this writer in an interview several months ago: “Mom was a photographer for Downbeat magazine and when I was a kid, she brought home records by the Stones, the Beatles and Elvis. I had seen them all on Sullivan.

At age 10, idolizing Gene Krupa and Buddy Rich, as well as Ringo Starr and Keith Moon, he was given a snare drum kit with a small cymbal attached to the stand, casting him into a certain creative fate. Papadopoulos was soon playing in a vocal group he’d formed with a young guitarist friend, but also seeking out expansive musical ideas.

“I was living with my grandparents at the time, and they had someone there to help out, Mrs. Bell, who was so cool,” he said. “She brought me James Brown records and taught me how to dance.”

Instrumental tutelage, however, was not on drums but flute and clarinet, instruments he continued to play over the years.

“The one song I wrote for Bush Tetras was actually composed on flute,” he noted.

During his teen years, while Papadopoulos, a self-described “long-haired stoner kid,” was interested in rock music, he refused to fall into the rule of distrusting anyone, or any sound, over 30.

“My mom taught me that some of the music of her generation was great,” he noted. “She said I needed to realize — as Ellington said — there is only good and bad music, regardless of when it was created. If you don’t see that, you nullify everything that happened before.”

Proving the point, Dee’s mother brought him to the Beatles’ concert at Shea Stadium, “but she also took me to see Coltrane,” he said. Resultantly, Dee refused to comply with friends’ requests to play Jethro Tull songs on flute as he veered toward Rahsaan Roland Kirk.

“I just couldn’t explain the music to them,” he said.

Dee Pop playing drums with Deer France and Friends, above, outside the Front gallery on Oct. 2, 2002. (Video by Everynight Charley Crespo)

Pop also spoke of a chance meeting in this period with one of his drumming heroes: “In 1971 I was 15 and The Who was playing Forest Hills Tennis Stadium and I really wanted to go,” he recalled. “Members of the tennis club could get onto the grounds, but not the rest of us. So I hopped the fence and landed on Keith Moon, who was sitting backstage. He grabbed me by my collar and said, ‘What do we have here?’ And I ended up getting to watch all three shows — from his drum riser.”

Making this amazing happenstance all the more memorable, Dee, rocking in his place, was burned more than once by Moon’s spotlights!

When the punk movement’s D.I.Y. ethos developed on Manhattan’s Lower East Side, Papadopoulos was drawn into it, particularly along its radical edge. Fascinated by the crosspollination of underground genres, the community among filmmakers, painters, poets, actors and musicians, in 1979 he moved into a squat on Seventh Street and Avenue C.

In a frank statement, Dee explained, “My two running buddies were Bobo Shaw and Dennis Charles. Dennis was sitting on the corner of Sixth Street playing an old crappy snare and a box for a bass drum. For a year, I didn’t realize it was him. I would hang out with Bobo, and we worked on drum shit together. Bobo had been with Defunkt. There was so much happening [Downtown]. For me, no wave and out jazz just made sense.”

Some months later, Bush Tetras came to be. Guitarist Pat Place had only begun playing her instrument several years prior within the ranks of the Contortions.

“They were groundbreaking,” Pop recalled. “I’m in the audience on the cover of their first record!”

But, in fact, all Tetras members were self-taught.

“We liked that avant edge,” he said. “The funk part of it, where Pat was coming from at the time, became central to our sound. I guess I kind of destroyed no wave by putting a 4/4 beat to it. That’s what made the Bush Tetras a little more accessible; listeners could figure out where the ‘1’ was,” he said, with a laugh.

During its formative stage, the band rehearsed at length, creating a unique, infectious repertoire. Rapidly developing a club following, Bush Tetras released its first single, “Too Many Creeps,” in 1980. With its lyrics an acerbic commentary on the place and time over frenetic guitar, churning bass and throbbing, crackling drums, it remains the band’s signature song.

Recording more and touring widely, the Tetras disbanded in 1983, regrouped again in 1995, and then after another breakup three years later, reformed in 2005. During each dissolution, though, Pop remained highly active.

“When Bush Tetras was dropped by Mercury Records in ’98, all I wanted to do was play jazz,” he said. “My friend had been booking avant-garde jazz shows at the Internet Café and when he dropped out, I took it over. I wanted to play with guys like William Parker and Sabir Mateen. I knew that if I booked the place, I’d get to know them.”

After the Internet Café closed, Pop established his series at CBGB.

“I had asked Hilly for the basement room on Sunday nights,” he recalled. “No need for sound or a doorman, just one bartender — and he said yes. It cost him nothing to give me the space, that’s why I was able to keep it running for four years, eventually expanding to three nights per week.

“I booked out rock things and straight jazz in the middle of it, too. Steve Swell used to give me so much crap about that. ‘You’re getting the Wynton Marsalis crowd down here,’ he’d argue with me, but I wanted diversity. And I wanted to challenge people, too.”

After CBGB’s sad closure, Dee attempted to continue his series at both 5C Cultural Cafe and Jimmy’s Down Under, but these  wouldn’t prove lasting. The effort, in any case, had been a labor of love.

“I paid a lot of people out of my pocket,” he said. “It was insulting to offer John Zorn, Pete Brotzman and Milford Graves just the door. A lot of them were very humble about it. Tazz [Roy Campbell] was like that: ‘A couple of Mai Tais and enough to get me home.’”

He also performed with The Clash, closely considered for full membership before Topper Headon’s return. In addition, Pop was a co-leader of experimental band Radio I-Ching, and a member of thunderous post-punk outfit the Gun Club.

“My career has been kind of all over the map,” he explained. “I’ve loved so much music that I’ve just delved into things. I’d spend three to four years playing free jazz, blues or Greek music. When I first left Bush Tetras in ’83, one reason was that I felt we’d gone as far as we could with what we knew how to do. I was very dissatisfied and looked at all of my influences — my love for Bela Bartok or King Oliver or 1940s and ’50s R&B, and that wasn’t what Bush Tetras was about. So, it’s taken me 40 years to recognize that this is what Bush Tetras does and I can still seek out those other opportunities.”

“People forget that John Lennon wrote a song about this guy! Shit! I made two records with him,” he said. “One had Wayne Kramer and Mike Davis from the MC5 on it. When you find out about some people firsthand, you realize that time forgets, and history gets blotted out.”

During the COVID-19 lockdown, Pop experienced many difficult hours, expressing bouts of dysphoria in his isolation, ironically alternating with a tenacious sense of survival.

“This reminds me of where AIDS was,” he said. “How many millions could have been saved? But I’m looking for silver linings in this. I’m not dead and I’m not sick, and there are good things. So, we have to sit around and be patient.”

Dee looked forward to resuming his latest free jazz series, at Truest in Greenpoint, Brooklyn, as well as going back on the road with Bush Tetras. As to the latter, the band’s celebration of the new box set was to be topped only by a Nov. 13 gig at Le Poisson Rouge, the top-line New York City music club.

Most recently, Pop had an unfortunate biking accident, in which he was sideswiped by a car, but he brushed it off. He passed on just days later.

On the evening of Oct. 9 at Howl Happening, as they recalled their drummer and close friend, Pat Place and Cynthia Sley announced that they would continue with performance plans, returning to Le Poisson Rouge on Nov. 13 — “and it will be for Dee.”

Even with his insistent drumming now at rest, the pulse of Dee Pop will continuously rumble into each groove of his beloved Bush Tetras.